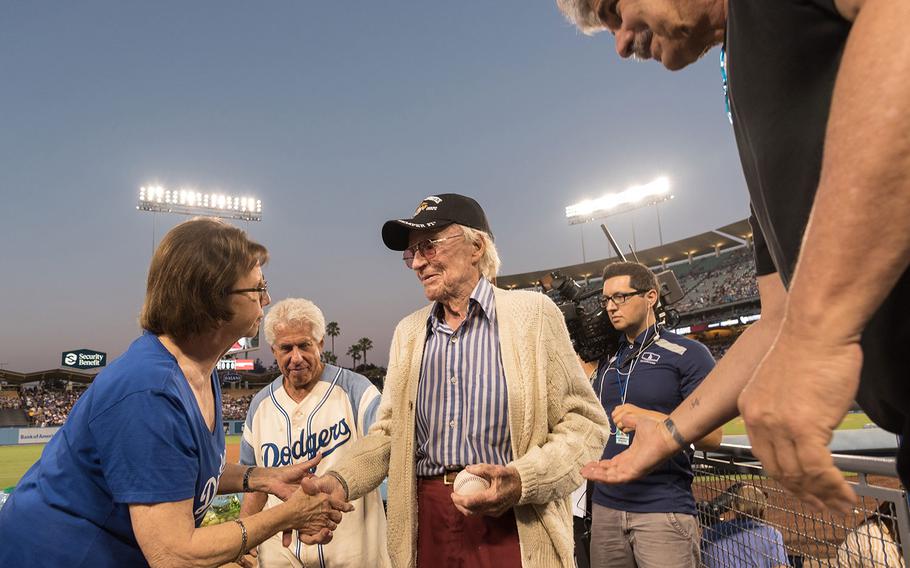 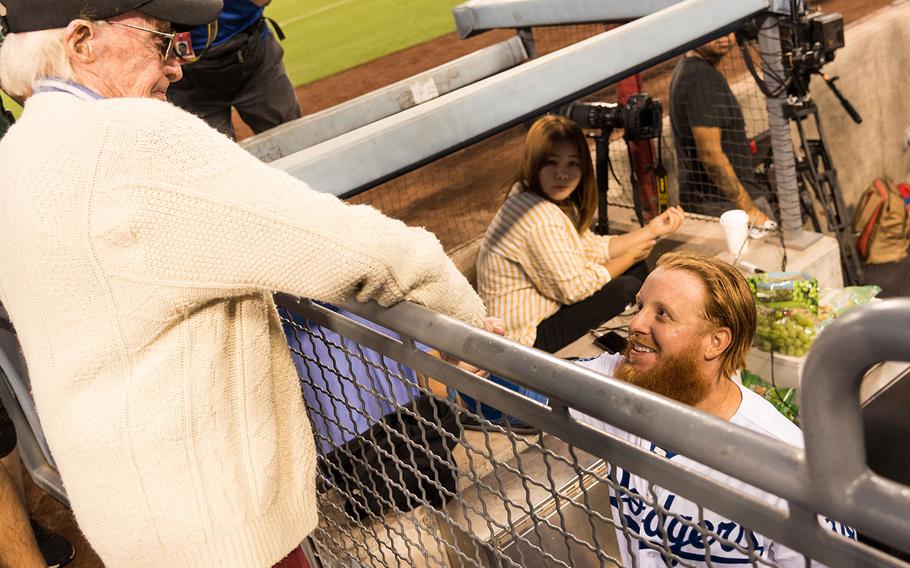 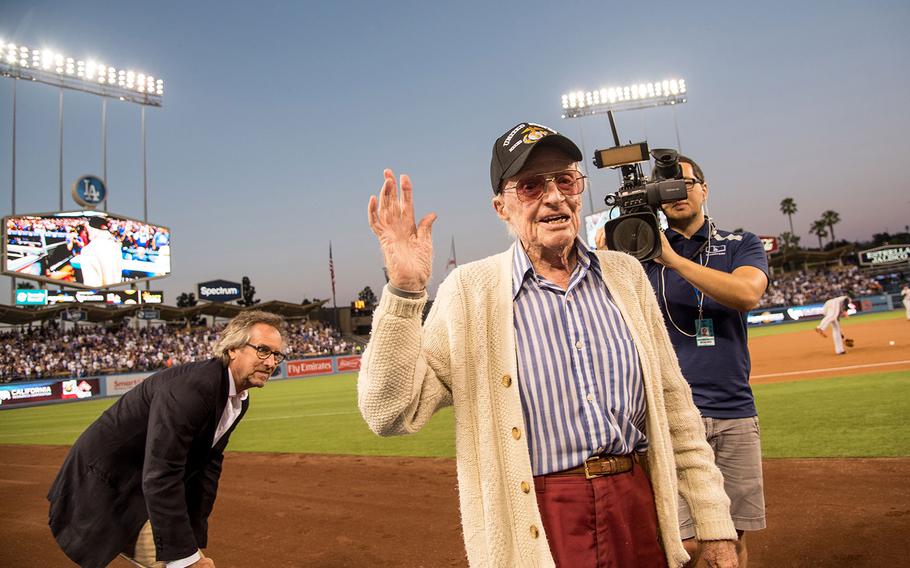 Buy Photo
Marine veteran Sam Folsom, 98, a fighter pilot who shot down three Japanese planes during the Battle of Guadalcanal in World War II, later served in the Korean War and retired as lieutenant colonel waves to the crowd at Dodger Stadium in Los Angeles on Aug. 14, 2018 as his son, Gerrit Folsom, left, looks on. The Dodgers honored Folsom, who lives in nearby Santa Monica, Calif., as their Hero of the Game. (Corey Dickstein/Stars and Stripes) 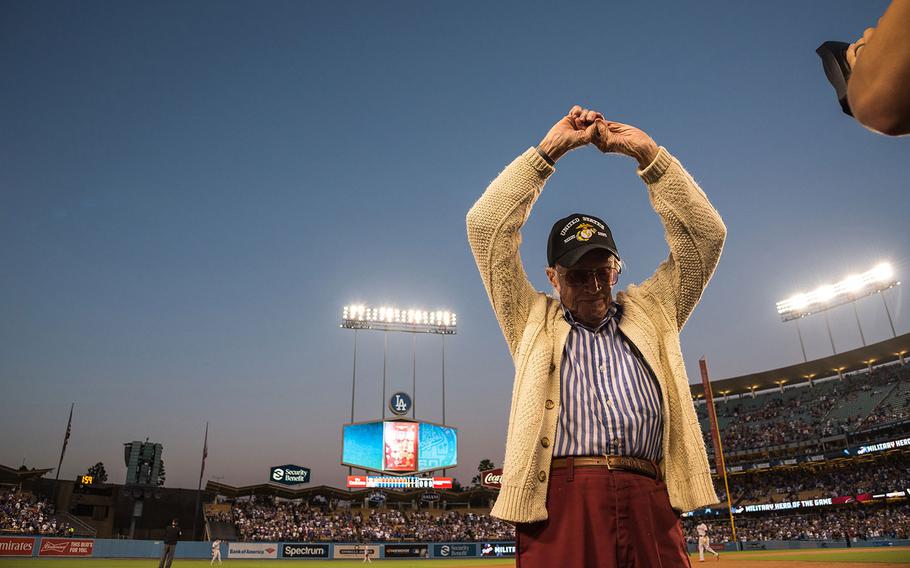 Buy Photo
Marine veteran Sam Folsom, 98, who flew fighters at Guadalcanal in World War II, where he shot down three Japanese aircraft, and served later in the Korean War is honored on the field at Dodger Stadium on Aug. 14, 2018. (Corey Dickstein/Stars and Stripes) 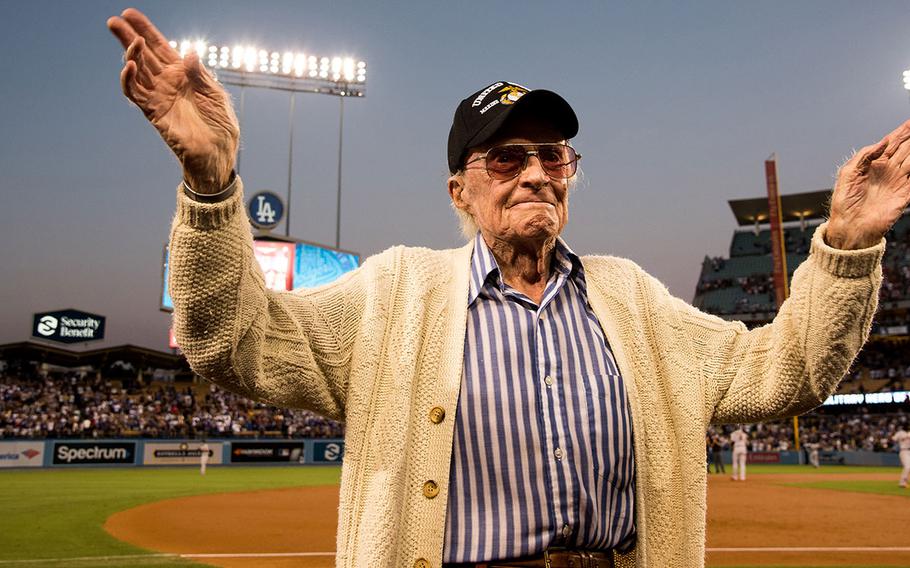 Buy Photo
Marine veteran Sam Folsom, 98, who flew fighters at Guadalcanal in World War II, where he shot down three Japanese aircraft, and served later in the Korean War is honored on the field at Dodger Stadium Aug. 14, 2018. (Corey Dickstein/Stars and Stripes) 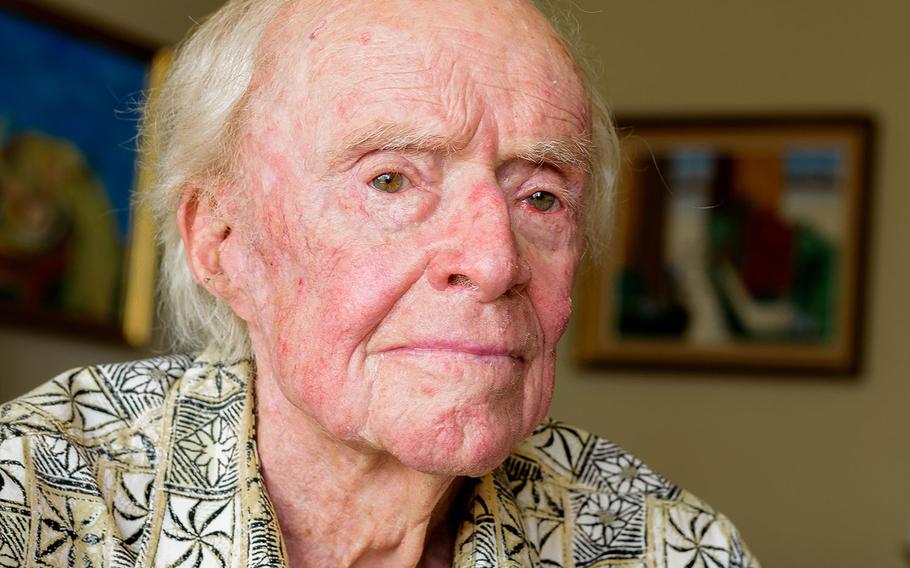 Buy Photo
Sam Folsom, 98, a Marine Corps veteran who flew fighters in World War II and in the Korean War, poses for a portrait in his home in Santa Monica, Calif. Aug. 13, 2018. He was credited with shooting down three Japanese aircraft during the Battle of Guadalcanal in 1942 (Corey Dickstein/Stars and Stripes) 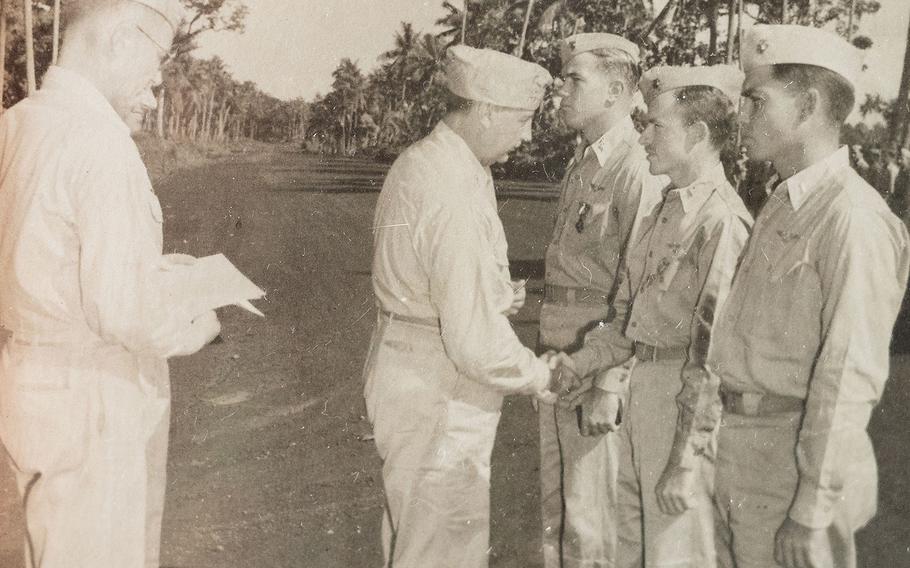 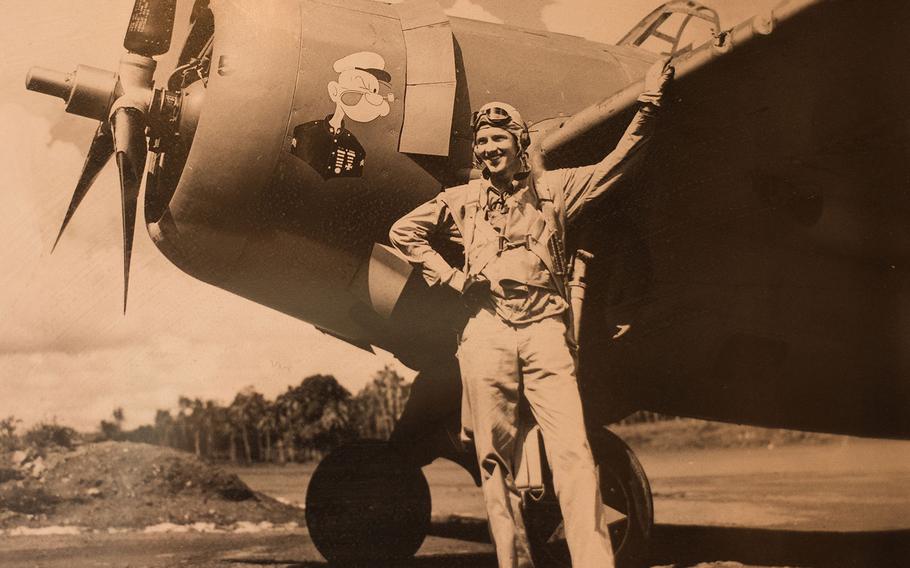 Sam Folsom poses in Samoa with his F4F Wildcat with Popeye art in 1942, after he left the Battle of Guadalcanal in World War II. He was credited with shooting down three Japanese aircraft -- two G4M Betty Bombers and a D3A Val dive bomber-- at Guadalcanal. (Photo courtesy of Sam Folsom) 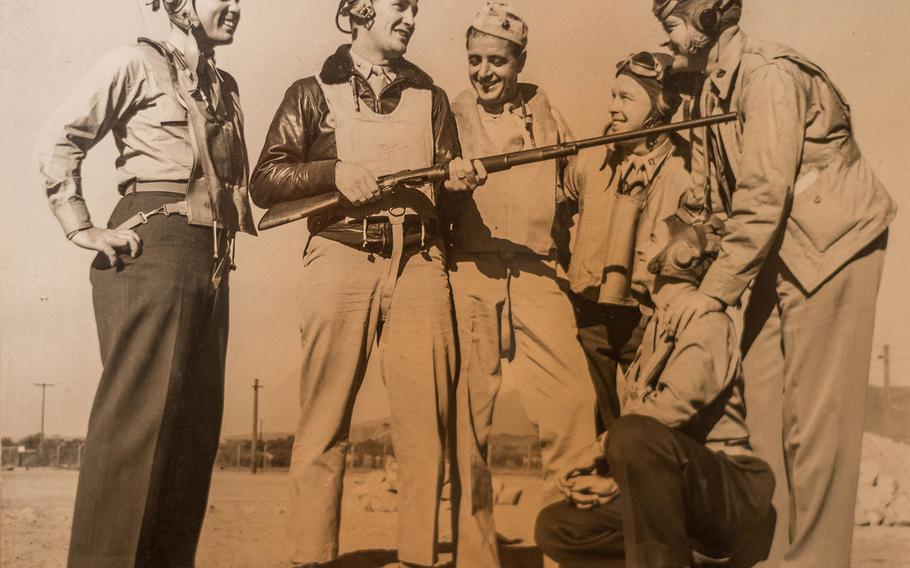 Sam Folsom, kneeling right, is photographed in 1944 with other servicemembers who had served in his Marine fighter squadron, VMF 121, at Guadalcanal in World War II two years earlier. The unit's executive officer Joe Foss, second from left holding the rifle, was a renowned fighter pilot who earned ace status, shooting down 26 Japanese aircraft at Guadalcanal, and earned the Medal of Honor for his actions in that battle. He went on to become a brigadier general in the South Dakota National Guard and served as that state's governor. (Photo courtesy of Sam Folsom)

LOS ANGELES — Sam Folsom had never flown an airplane above 10,000 feet or fired the weapons on the F4F Wildcat fighter he would soon pilot into combat when he arrived on Guadalcanal in September 1942.

The battle for the strategic, jungle-covered South Pacific island was raging, as Folsom and the bulk of his inexperienced fighter squadron VMF-121 joined the operation. They were tasked with finding and destroying Japanese G4M medium bombers – known as “Betty Bombers” – that had been wreaking havoc on American troops on their first major offensive in the Pacific theater during World War II.

“We were in combat immediately with no experience,” Folsom, 98, recently told Stars and Stripes. “Green as can be – very few of us had any real flight experience. I guess I had 12 or 14 hours in the F4F when I got into combat.”

It showed from the outset, he recalled.

Just days after reaching Guadalcanal, Folsom found himself piloting his Wildcat upward of 25,000 feet when a formation of Japanese A6M Zero fighters and Betty Bombers approached. For the first time, Folsom maneuvered his fighter into position, moving onto the tail of an enemy plane to line up the sights for the six M2 .50-caliber machine guns mounted on his Wildcat’s wings. He pulled the trigger.

Folsom’s squadron had covered its guns in lubricant before he took off, but at altitude the coating froze, rendering the machine guns useless.

“I don’t remember anything except thinking, ‘Jesus, are these damn guns going to fire?’ ” Folsom said. “Very frustrating. Causes bad words to come from your mouth.”

It would happen twice more to Folsom – and dozens of additional times to his squadron mates – before the unit realized the cause. Folsom would leave Guadalcanal with three air-to-air kills – after downing a pair of Betty Bombers and a D3A Type 99 “Val,” a carrier-based Japanese dive bomber.

To the best of his knowledge, Folsom said, he is the only living member of his fighter squadron.

In honor of his 98th birthday, Folsom took the field Aug. 14 at Los Angeles’ Dodger Stadium, where the Major League Baseball team celebrated him as its Hero of the Game.

It was a moment, like so many others in his life, he said he would treasure.

‘I didn’t dream it’ Seventy-six years after Guadalcanal, Folsom admits he does not remember his days swooping through the clouds over the South Pacific as well as he once did. Those memories, he said, sometimes feel like dreams.

“It’s like I’m sitting here telling you an awful big lie,” Folsom said during an interview in the living room of his apartment in a Santa Monica, Calif., high-rise that looks north toward Beverly Hills. “You no longer have any touch with really something that went on 70, 80 years ago. It’s gone. I must have dreamed that. But I didn’t. I didn’t dream it.”

He regularly shares his experiences, sitting for hours recently for interviews by a neighbor, Los Angeles-area filmmaker Steven C. Barber, who plans to turn the footage into a documentary.

“I saw he was wearing a Marine hat and asked him about it,” Barber said. “Talking to him, I thought, ‘I’ve got to share this man’s story.’ ”

With a hint of an accent from his native Massachusetts, Folsom rattles off dates, locations and the numbers identifying the units he flew with in World War II, during the American occupation of Japan, in the Korean War and as an instructor and test pilot in the United States. He retired from the service in 1960 as a lieutenant colonel to take an executive position at Pan American World Airways and eventually settled into a long real estate career in New York City.

Marine Corps “through and through,” as a neighbor described him, Folsom eschews accepting more help than he deems necessary. He declines to use a cane or walker and often refuses the aid of a friend or family member’s arm.

When he took the field at Dodger Stadium, he shrugged off offerings of support as he raised his arms high over his Marine Corps ball cap-covered head, waving to the crowd of nearly 47,000, which roared its approval.

The veteran of two wars -- just two years shy of reaching a century on earth -- accepted handshakes and “thank yous” from fans and from Dodger third baseman Justin Turner and outfielder Matt Kemp as he made his way up the legendary stadium’s concrete steps.

“I enjoyed every moment of it,” he said, smiling broadly as he looked down at the field where the Dodgers and San Francisco Giants were battling.

Flying at Guadalcanal Folsom is among the last surviving men to have piloted a Marine aircraft in the Battle of Guadalcanal, a decisive victory for the Allied forces in the Pacific and widely considered a turning point in the campaign against the Japanese. To the best of his knowledge, Folsom said, he is the only living member of his fighter squadron, a team of 40 pilots that lost 17 in the three months it spent on the island. Overall, Allied forces lost 7,100 men; Japan casualties were 31,000.

The fight was difficult. His squadron lived in tents near Henderson Field, the key airstrip that was built by the Japanese and completed by U.S. Navy Seabees after Marines stormed the island in the offensive that caught the enemy by surprise. Though Folsom insists the conditions could have been much worse, he acknowledged that aviators often went without hot food and basic supplies were in heavy demand. Uniforms and clothing, he said, were so scarce that Marines would raid the quarters of their comrades who were shot down or went missing.

Despite the losses, Folsom’s squadron gained recognition, earning the moniker “Foss’s Flying Circus.” The unit’s executive officer, then-Maj. Joe Foss, became renowned for his exceptional flying skills, earning 26 enemy air-to-air kills, making him the Marine Corps’ top ace at the time. For his actions at Guadalcanal, Foss was awarded the Medal of Honor in 1943. He reached the rank of brigadier general in the South Dakota Air National Guard and served as that state’s 20th governor.

Folsom does not hold another renowned Marine Corps flyer and Medal of Honor recipient in such regard. Folsom recalls being underwhelmed after meeting Gregory “Pappy” Boyington, the commander of VMA-214 and an ace with a penchant for drinking and fighting his own men.

For Folsom, more than the heroic moments – the air-to-air kills, the action that earned him a Distinguished Flying Cross – it was the close calls at Guadalcanal that largely stick out in his mind.

He recalled at least three incidents in which his Wildcat was shot up badly by Japanese Zeros, enemy fighters that were faster and more agile than his F4F.

In one such incident, Folsom was chased by three or four of the enemy fighters. He maneuvered in and out of cloud cover hoping unsuccessfully to lose his Japanese pursuers.

Then the bullets started to fly.

Dozens of them pierced the metal shell of his Wildcat. One struck him in the leg, another hit the plane’s throttle level, separating it from the panel connecting it to the flight deck.

“They shot the hell out of me,” Folsom said. Somehow he managed to land his fighter, leaving him shaken. “I was lucky. Don’t misunderstand me – it’s not a question of bravery, of anything like that. You just automatically say, ‘I’ve got to land the damn airplane. I’m going to do it.’ And then you do it. That’s all.”

He recalls the successes just as matter-of-factly. Of his first air-to-air kills, in which he dove from some 20,000 feet to near the ocean’s surface and shot down two Betty Bombers within minutes of each other, he does not recall any fanfare.

“It’s nothing, you just do it,” he said. “All this baloney in movies about people torturing themselves, and wondering should I shoot this guy and all that — you automatically, at that point in life, shoot because you know that guy is going to shoot at you.

“I don’t really remember any emotion. Truthfully, I don’t. I was there, fired the guns. It happened.”

The formative years Folsom never intended to join the Marines.

He was commissioned a Navy ensign upon graduation from the Massachusetts Maritime Academy in 1940, but was denied a request to enter flight training – the entire reason he had wanted to join the military.

He elected to vacate his commission, choosing to join the Marines, who agreed to send him into aviation training. He would spend the next 17 years on active duty.

“You don’t give it too much thought at the time, but in retrospect the Marine Corps meant a lot to me,” he said. “It gave me experiences I never could have gotten anyplace else.”

At 98, Folsom said he would not trade his experiences for anyone else’s life – including those close calls over Guadalcanal. His military experience, he added, shaped the rest of his life.