Known for winter sports, Garmisch is much more than just a ski town On the Zugspitze glaciers provide a little bit of snow, which means sledding and snowball fights even in the summer. (John Vandiver/Stars and Stripes)

On the Zugspitze glaciers provide a little bit of snow, which means sledding and snowball fights even in the summer. (John Vandiver/Stars and Stripes) The view from Leutasch Gorge during a trip in August. The gorge, which includes a scenic walking trail near the town of Mittenwald, is about a 30 minute drive from Garmisch-Partenkirchen, Germany. (John Vandiver/Stars and Stripes) The trails near Leutasch Gorge near the ﻿town of Mittenwald include a walkway that leads to a waterfall. (John Vandiver/Stars and Stripes) 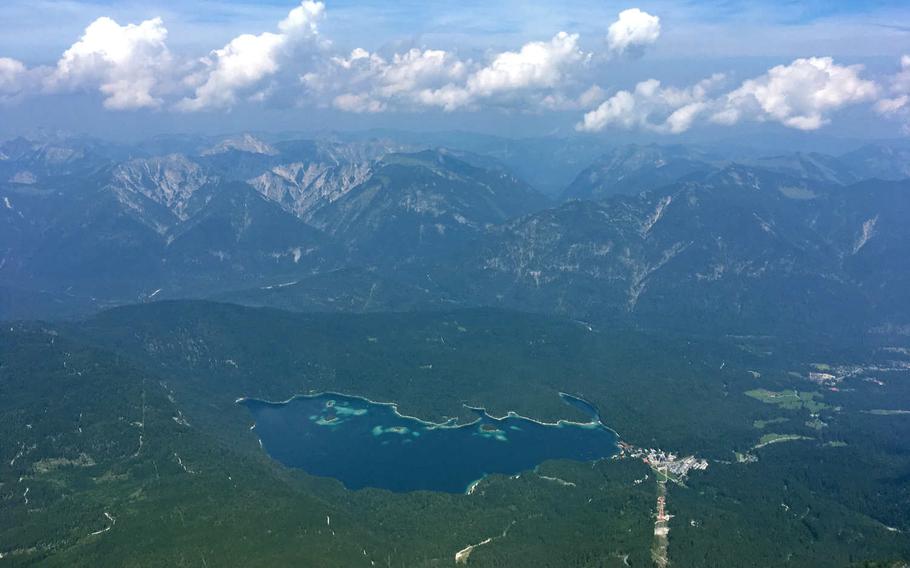 The view from the top of the Zugspitze, Germany's highest mountain. The lake at the base of the mountain is the Eibsee. (John Vandiver/Stars and Stripes) 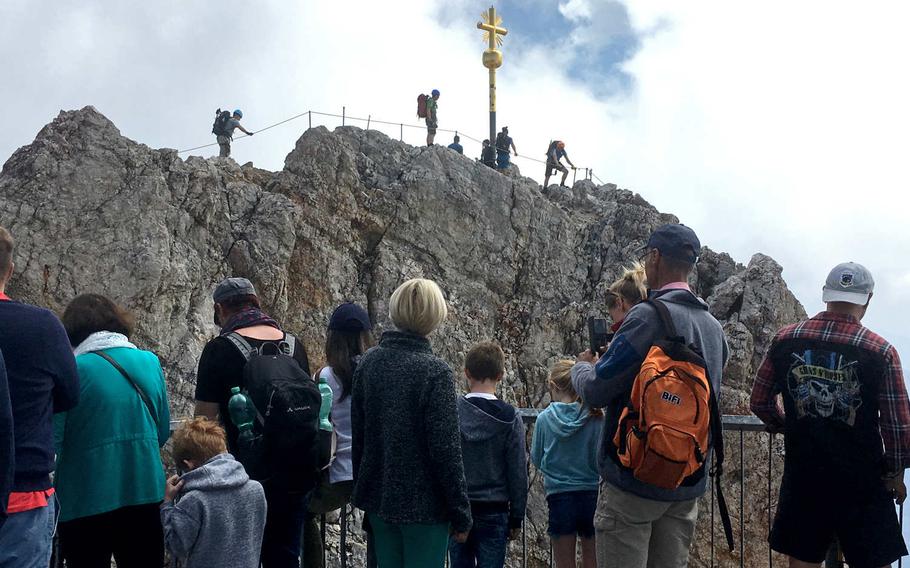 Visitors to the Zugspitze, Germany’s tallest mountain near Garmisch-Partenkirchen, can climb to the very peak of the mountain, but it is a little risky. (John Vandiver/Stars and Stripes) Ehrwad Alm offers lots of hiking trails in the Tyrol mountains. The Austrian range is only about a 30-minute drive from Garmisch-Partenkirchen, Germany. (John Vandiver/Stars and Stripes)

In the Bavarian Alps, it’s not all about the skiing.

While the mountain town of Garmisch-Partenkirchen, Germany, is a prime destination for winter sports, there is more to the area than just sliding down snow-packed slopes. Garmisch and the mountain villages around it make for great off-season long weekends. The views are spellbinding, and the hikes a refreshing escape from the daily grind.

Garmisch is a good base for exploring the Bavarian Alps and beyond. It also is home to the military’s Edelweiss Lodge and Resort, an attractive boarding option for holders of military ID cards. On a recent visit, my family and I wandered the town, taking in the view. The next morning we were off to nearby Mittenwald, a small town about 10 miles south of Garmisch that is close to an excellent hiking trail.

Here are some sights you can easily reach from Garmisch:

Leutasch Gorge On the outskirts of Mittenwald, the hilly wooded trails that lead to the Leutasch Gorge are a great place for a day of hiking.

The walk isn’t too arduous — no special equipment is needed — but there’s a little bit of huffing and puffing involved. Young children can manage the walk, though there may be some griping along the way.

As with most family-friendly trails in Germany, there are places to stop for a drink and get a bite to eat if you want to take a leisurely pace. The trail leads to a spectacular 160-foot gorge. A walking bridge connects one cliff side to the other — safe yet still somehow nerve-wracking.

Access to the gorge and trails is free. A waterfall at the entrance costs a couple of dollars to see, and it’s worth it. The narrow-winding path is shielded from most sunlight. You just follow the sound of crashing water. The cavern is chilly even in summer.

Zugspitze No visit to the German Alps is complete without heading to the top of the Zugsptize, Germany’s tallest mountain, which is a 40-minute drive from downtown Garmisch. Some people choose to climb to the top solo, a dangerous daylong venture only for experienced climbers. I met one famished climber after I got to the peak via cable car (about $50 round trip). He was eating three plates of Weisswurst and drinking three Cokes after his exhausting ascent. I rewarded my own efforts with a beer.

It’s possible to go a little higher, up some craggy rocks. But the path is pretty narrow, and you’ll find yourself in a fatal descent if you take the wrong step.

We skipped that part and went to one of the mountain glaciers, where even on a hot summer day you can throw snowballs. At the bottom of the mountain there’s the lake known as Eibsee, which is great for swimming in the summer and hiking when it’s cooler.

Ehrwald A 30-minute drive southwest of Garmisch brings you to Ehrwald, an Austrian ski town in the Tyrol mountains. The Ehrwald Alm is also a good place for hiking and mountain-biking. A cable car ($20 for an adult ticket) gets you to a good walking point where you can explore an extensive trail network.

Along our jaunt, we stopped at Hochfeldern Alm, a little mountain restaurant where we feasted on Kaiserschmarrn — a chopped up pancake served with powdered sugar and applesauce that is a must-eat regional specialty. It was washed down with fresh milk from the local cows grazing nearby.

After eating, we carried on along the hillside past the cows and their clanging bells.

DIRECTIONS: Garmisch-Partenkirchen is 230 miles south of Stuttgart. Various routes are possible. The A8 and A7 carry you most of the way.

COSTS: Lodging costs vary greatly, but there are ample choices.

FOOD: Garmisch-Partenkirchen has numerous eateries of all types. At the Hochfeldern Alm in Ehrwald, the menu includes schnitzel, various meat dishes, fried potatoes, pasta and desserts. Meals are between 8-12 euros ($9-$14).

INFORMATION: More information can be found at these websites: www.gapa.de and www.zugspitze.at/en.