Journalist scours Kaiserslautern, a city dripping with possibilities, for the best ice cream 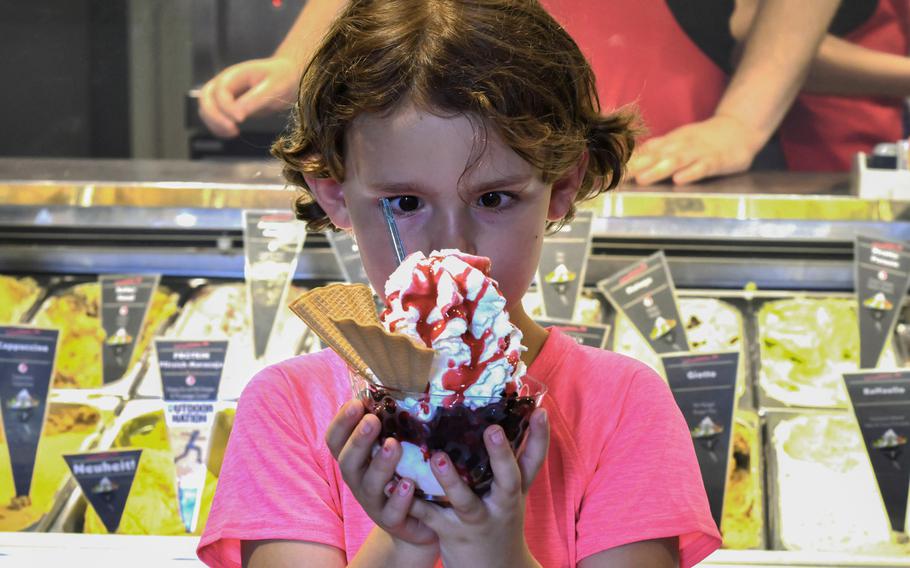 Cecelia Pinson, 7, stares at a mixed berry ice cream sundae she's holding in front of the display of more than 30 varieties of ice cream at Palazzo Sandro in Kaiserslautern, Germany, on July 22. Palazzo Sandro has a sundae happy hour after 7 p.m. (Karin Zeitvogel/Stars and Stripes)

Cecelia Pinson, 7, stares at a mixed berry ice cream sundae she's holding in front of the display of more than 30 varieties of ice cream at Palazzo Sandro in Kaiserslautern, Germany, on July 22. Palazzo Sandro has a sundae happy hour after 7 p.m. (Karin Zeitvogel/Stars and Stripes) 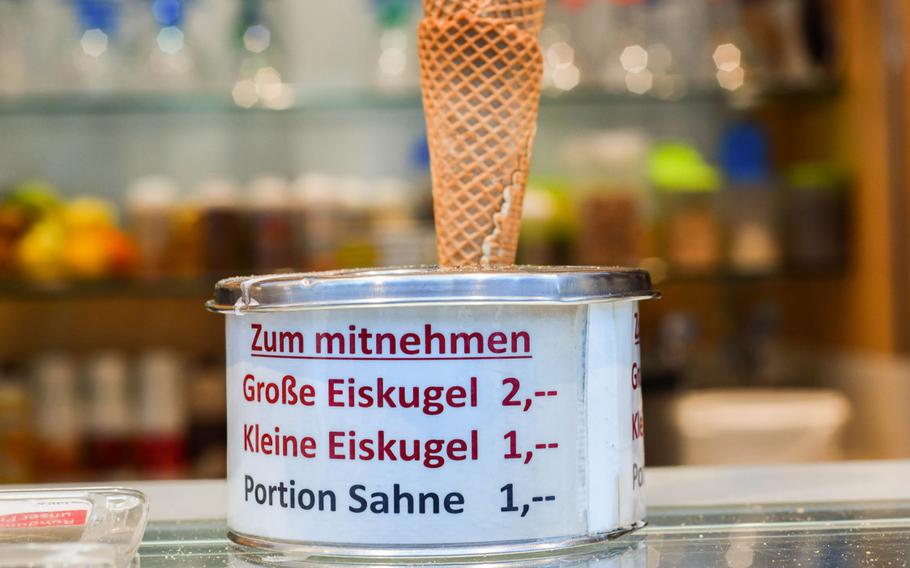 A stack of ice cream cones stand atop a can showing the prices of ice cream to go at Palazzo Sandro in Kaiserslautern, Germany, on July 22. Most ice cream shops and cafes in Kaiserslautern sell a single scoop for 1 euro, although some priced a one-scoop cone or cup at 1.20 euros. (Karin Zeitvogel/Stars and Stripes) 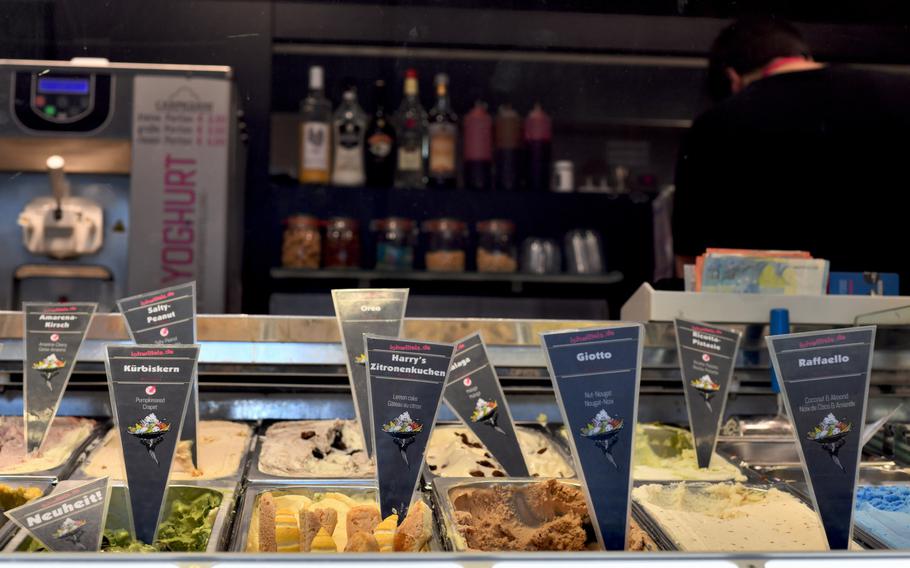 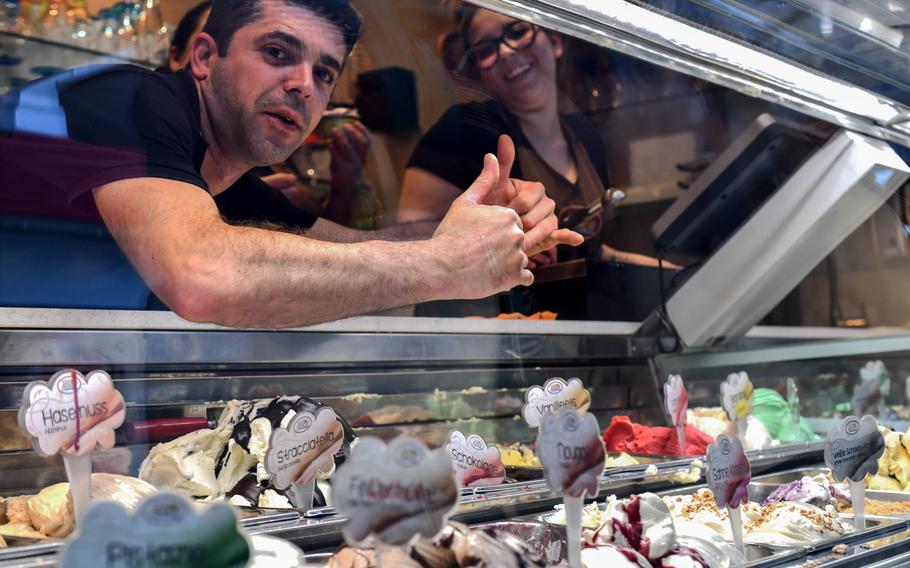 Daniel Moraes gives the thumbs-up through the glass freezer display at the San Marco Eiscafe in Kaiserslautern, Germany, on July 22. San Marco's 35 flavors of ice cream are home-made above the cafe. (Karin Zeitvogel/Stars and Stripes) 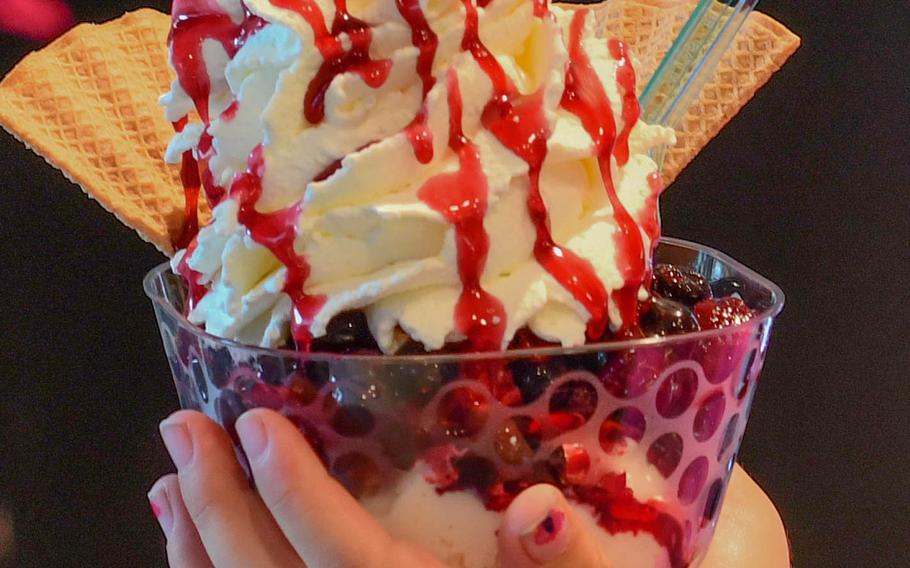 A mixed berry ice cream sundae is held up by ice cream enthusiast Cecelia Pinson, 7, at the Palazzo Sandro Eiscafe in Kaiserslautern, Germany, on July 22. (Karin Zeitvogel/Stars and Stripes) 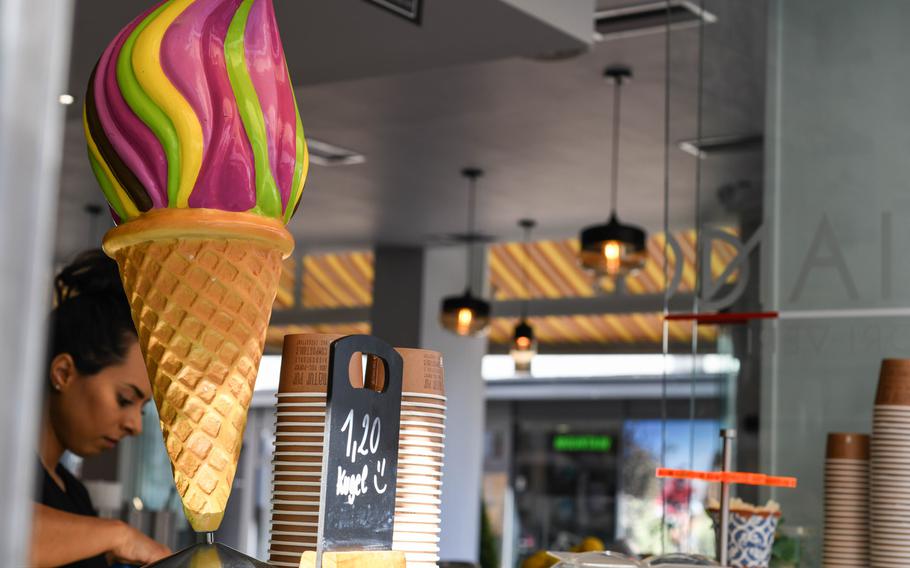 A server works behind a large plastic ice cream cone at Italiano Sapori Veri in Kaiserslautern, Germany, on July 23. Sapori Veri sells 18 flavors of homemade ice cream from a window adjacent to its sit-down restaurant and cafe. (Karin Zeitvogel/Stars and Stripes) 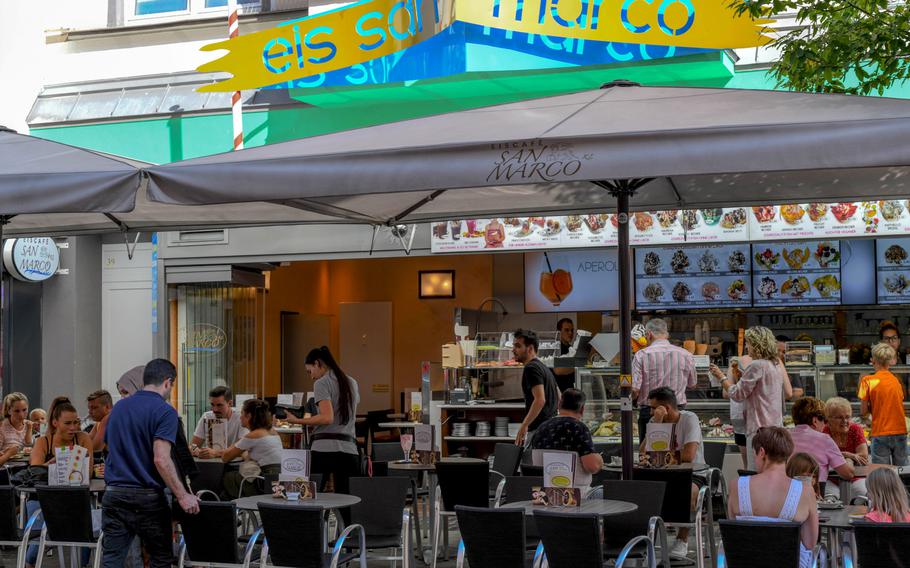 Customers sit under umbrellas outside the San Marco ice cream cafe in Kaiserslautern, Germany, on July 23. (Karin Zeitvogel/Stars and Stripes) 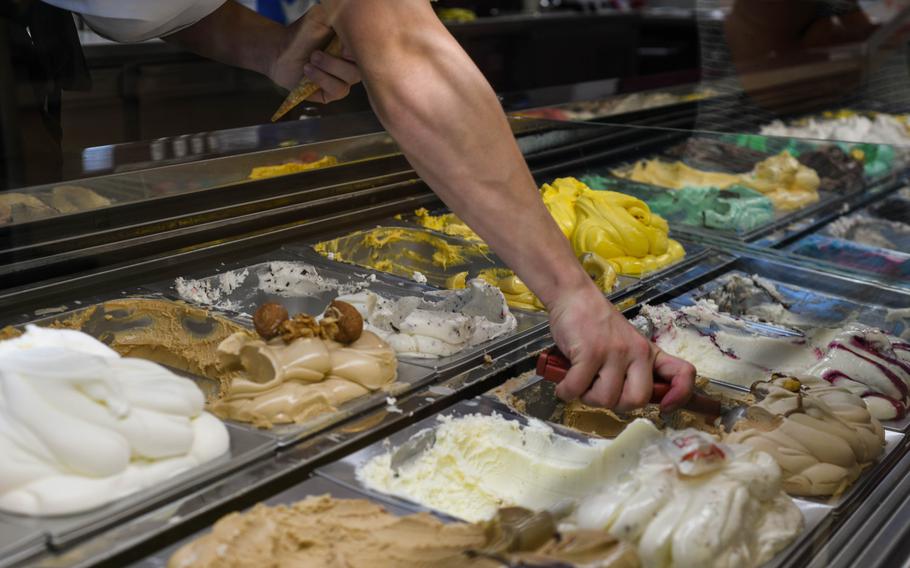 A server at La Luna, located in the K in Lautern shopping mall in Kaiserslautern, Germany, scoops ice cream for a customer on July 23. (Karin Zeitvogel/Stars and Stripes) 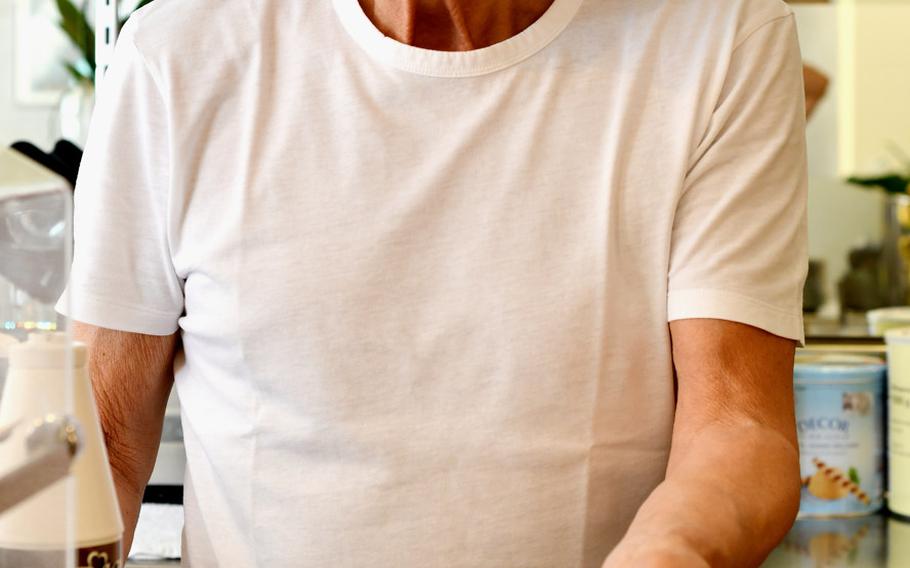 Dolomiten Eiscafe owner Werner Braun holds up a cup of coffee-flavored spaghetti ice cream inside the cafe in Kaiserslautern, Geramny, on July 23. The Dolomiten makes its own ice cream, and the coffee variety is made with real coffee. (Karin Zeitvogel/Stars and Stripes)

Taylor Swift says curling up with pints of it makes her happy. Arizona Governor Doug Ducey says it brings people together. Actor James Dean once likened it to love.

“It” is ice cream, and one of the first things I noticed when I moved to Kaiserslautern at the start of the summer was the number of people walking around with cups or cones of it. So I set out to find K-Town’s best scoop.

For 72 hours, I had ice cream for breakfast, lunch, dinner and dessert. To make my quest more interesting, I tried the most unusual flavor that each place offered. Establishments were rated based on ice cream variety, taste and quality of service.

Here, in the order of testing, are the ice cream places I tried.

At Eiscafe Venezia, Eisenbahnstrasse 46, the woman scooping on Sunday afternoon seemed impatient as I contemplated my choices, and at one point left to do something else. When she handed me my cup of cinnamon ice cream, a flavor I don’t remember seeing back in the U.S., I noticed the remnants of someone else’s frozen treat on the edge of my scoop. But I thought I’d eat it anyway because it looked like the traces of berry sorbet and I quite like berries.

The first spoonful had that been-in-the-freezer-too-long taste. I tried to discern even a hint of cinnamon in the ice cream but quickly gave up. When I found myself chewing on something gritty, I decided my best option would be to throw away what remained of my 1 euro cup, which was almost all of it. I started thinking my quest for the best ice cream might not be a great idea.

Continuing down Eisenbahnstrasse, I got to Italiano Sapori Veri. Their most unusual flavor was lemon-basil sorbet. High in basil and not too sweet, the lemony twang and the aromatic pop of the basil worked wonders on my still recovering palate. Sapori Veri has 18 flavors of ice cream, all of them homemade, according to the woman who served me. A scoop here is 1.20 euros.

On day 2, I visited Palazzo Sandro at Marktstrasse 37. They’ve been making ice cream in Landau, about 30 miles southeast of Kaiserslautern, since 1996. The Kaiserslautern branch opened four years ago and offers 35 flavors, including the very unusual pumpkin seed. I took a scoop of that, topped with a scoop of vanilla, while my guests shared a mixed berry sundae, which we got at the happy hour price of 4.50 euros.

Pumpkin seed ice cream, it turns out, tastes like hemp oil. When I shared this information with the server, he asked, “But did you like it? Because I had someone here earlier who cussed me out and said it was the worst ice cream ever, and I was worried I’d done something wrong.” Then he told me that if the person who serves you ice cream doesn’t thoroughly rinse the scoop and there are leftovers from someone else’s ice cream on it, the ice cream could have that been-in-the-freezer-too-long taste.

Palazzo Sandro adds new flavors every year, dropping ones that weren’t well received the previous summer. In addition to adventurous flavors, a helpful, friendly server, and a seven-day-a-week sundae happy hour after 7 p.m., Palazzo Sandro does gluten-free cones and ice cream delivery by motorcycle. And, yes, I like pumpkin seed ice cream.

Having just eaten ice cream that tasted like hemp oil, I should have been hard to impress when I went next door to Eiscafe San Marco. But they succeeded with excellent service, great variety of flavors and tasty ice cream. This Eiscafe has been in Kaiserslautern for 20 years and makes ice cream in a room above the shop. My tiramisu ice cream tasted just like tiramisu, only colder, and the enthusiastic staff insisted that I also try their lemon-basil sorbet. It could have done with a touch more basil, I thought. Owner Grazia Rizzo said they add and drop new flavors on a regular basis throughout the summer. Scoops here are 1 euro each.

At breakfast on day 3, I found myself at the Eiscafe Dolomiten, at Schillerstrasse 2. They didn’t have any unusual flavors, so I settled for coffee ice cream, served as “spaghetti.” Spaghetti ice cream is said to be a German invention that involves forcing what’s probably two to three scoops through a metal press with holes in the bottom.

Cafe owner Werner Braun insisted that I have sauce on my spaghetti ice cream (because who eats spaghetti without sauce?), so I took chocolate. Dolomiten’s ice cream is made in-house and mine contained real coffee, giving me my caffeine fix for the day. My breakfast spaghetti ice cream cost 5 euros, but a single scoop here goes for 1 euro.

For lunch, I had a bright green Waldmeister ice cream at La Luna in the K in Lautern mall. Called sweet woodruff in English, Waldmeister is an herb that Germans make a syrup out of and use in an alcoholic punch they drink in the summer. The service was friendly, there were 22 flavors to choose from, a list of which ones contain what allergens and additives, and the mall air conditioning was working better than usual. But I wasn’t bowled over by my 1-euro scoop and still can’t describe what Waldmeister tastes like.

Nearby, on Muehlstrasse, is the Rialto Eiscafe. Rialto has been in Kaiserslautern for 51 years. They offer 35 homemade flavors, including cinnamon, which I timorously tried again, and marzipan. Tasting the two flavors together was like having cool Christmas cookies in the middle of July. Rialto restored my faith in cinnamon ice cream, demonstrating why it consistently gets great reviews. Contrary to what the internet says, they’re not open 24 hours a day, though. A scoop is 1 euro.

Lastly, I tried IceRobot at Spittelstrasse 6. If you have kids, go here. You place your order on a large touch screen, which gives you a ticket with a barcode that you scan on a nearby cylindrical post. Then you wait until a machine that looks like a robot vacuum cleaner emerges through a tunnel, carrying your ice cream. All-you-can-eat toppings and whipped cream are included in the price, which starts at 3 euros for a single scoop. My bright purple sweet potato ice cream was too sweet for my taste, but IceRobot is worth it, if only for the automated gastronomic experience.

My final scoop on ice cream* in Kaiserslautern:

*Ice cream tastes expressed in this article are the author’s alone.