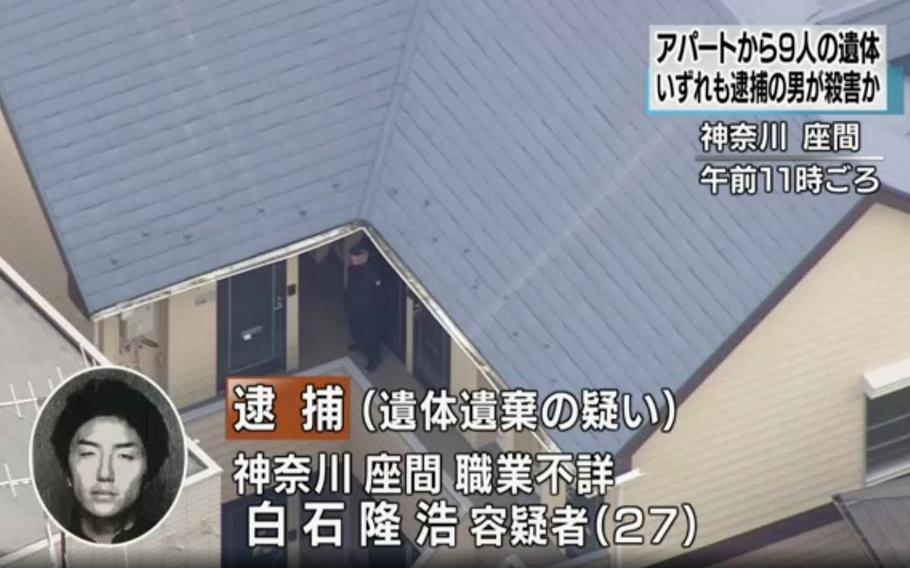 This screenshot from Japanese broadcaster NHK shows the apartment of Takahiro Shiraishi, inset, in which several dismembered bodies were found on Tuesday, Oct. 31, 2017. (Screenshot from NHK)

A police spokesman said Takahiro Shiraishi, 27, confessed to cutting up the bodies and hiding them in coolers covered with cat litter, according to The Associated Press.

Police believed the bodies of eight women and one man were hidden in the apartment, according to Japanese broadcaster NHK and other media.

Shiraishi was initially being investigated in the disappearance of a 23-year-old woman from Hachioji, a nearby city in western Tokyo. The woman, who was last seen by family on Oct. 21, met Shiraishi via Twitter after expressing a desire to commit suicide, according to the Mainichi newspaper. She was later spotted on security video footage walking with Shiraishi near Sobudai-mae Station near Camp Zama on Oct. 23.

Police said they uncovered the grisly scene at Shiraishi’s apartment while searching for the missing woman, whose body is believed to be among the several that were found.

Residents of the building said they noticed a strong odor emanating from the apartment shortly after Shiraishi moved in two months ago, the Asahi newspaper reported.