Soldiers examine a wrecked Japanese Kawanishi H8K near Makin, Gilbert Islands in November 1943. Two similar planes were used in a bombing raid on Oahu, Hawaii, on March 4, 1942. (Courtesy of the National Archives)

Soldiers examine a wrecked Japanese Kawanishi H8K near Makin, Gilbert Islands in November 1943. Two similar planes were used in a bombing raid on Oahu, Hawaii, on March 4, 1942. (Courtesy of the National Archives) 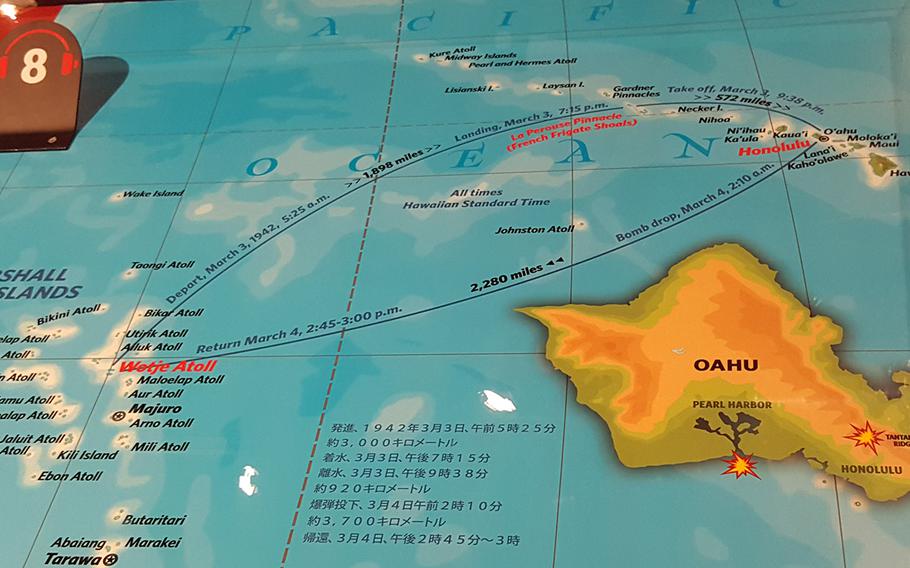 Buy Photo
A display at the Pacific Aviation Museum in Honolulu shows the route that two Japanese Kawanishi H8K bombers flew from the Marshall Islands to Hawaii during an attempted raid on Pearl Harbor on March 4, 1942. The enlarged inset of Oahu shows where the bombs landed. (Wyatt Olson/Stars and Stripes) Buy Photo
A model on display at the Pacific Aviation Museum in Honolulu shows a Kawanishi H8K bomber used by Japan in a second attack on Pearl Harbor on March 4, 1942. (Wyatt Olson/Stars and Stripes) Buy Photo
Soldiers inspect a crater left near Honolulu after a Japanese bombing raid on Hawaii, March 4, 1942, in this undated photo on display at the Pacific Aviation Museum in Honolulu. (Wyatt Olson/Stars and Stripes) 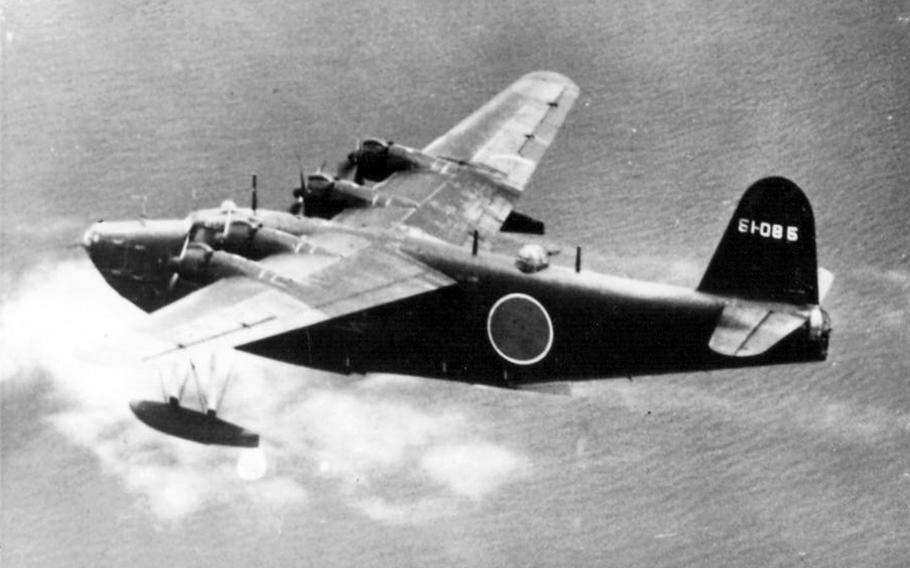 A Japanese Kawanishi H8K is seen seconds before being shot down by a Navy aircraft in July 1944. (Courtesy of the U.S. Navy)

FORT SHAFTER, Hawaii — The Japanese surprise air attack of Dec. 7, 1941, on Hawaii was a staggering military triumph that decimated the Pacific Fleet’s battleships in Pearl Harbor and wiped out most of Oahu’s air defenses.

While the two H8Ks successfully flew the 4,800-mile roundtrip from the Marshall Islands to Hawaii, the March 4, 1942, bombing raid was a tactical flop.

But its greatest failure was strategic, tipping the Japanese navy’s hand to U.S. military leaders who leveraged the intelligence to achieve victory in the Battle of Midway three months later.

Japan’s December attack, which had finally drawn a reluctant United States into World War II, had hit all eight Pacific battleships, sinking four of them. The USS Arizona and USS Oklahoma were unsalvageable. More than 2,400 Americans died in the attack.

Imperial Japan immediately set about attempting to occupy most of Asia with the assurance that the Pacific Fleet would be too crippled to stop them.

But Japanese war planners soon recognized that “crucial targets” such as the Pearl Harbor shipyards, maintenance shops and fuel-reserve facilities had been largely undamaged, according to an exhibit at the Pacific Aviation Museum in Honolulu. From those shipyards America mobilized an astoundingly speedy and effective effort to repair vessels damaged in the December attack.

The Japanese hoped to stymie that salvage work with Operation K, a bombing raid using the first two prototypes of the H8K amphibious plane.

“It was probably the best sea plane in the war, very heavily armed,” Burl Burlingame, historian at the Pacific Aviation Museum, said of the 167 four-prop H8Ks that Japan built during the war. “It would actually engage in combat with American fighters on occasion. It was huge, and for its size it was very maneuverable, very rugged.”

Despite being a better sea plane than anything produced by the U.S. or Great Britain during the war, the H8K is “one of those iconic aircraft of the Pacific war that’s pretty much forgotten,” Burlingame said.

Operation K While a significantly smaller attack than the one three months earlier, the March 1942 bombing raid was audacious — the longest-distance run of the war.

The H8Ks, with a 124-foot wingspan and a top speed of nearly 300 mph, took off from Wotje Atoll in the Marshall Islands on March 3 and set down in the calm waters of French Frigate Shoals about 560 miles northwest of Honolulu. There they were refueled by two waiting submarines.

They then flew in the dark toward Oahu, each plane carrying four 550-pound bombs. They were detected by U.S. radar about 200 miles out, and American fighter planes were scrambled to intercept them. Without airborne radar, the fighters could not find the H8Ks.

But the lion’s share of bad luck fell upon the Japanese raiders, who had been counting on a moonlit night to spot their targets. The H8Ks reached Oahu in the early hours of March 4, but a canopy of heavy rain and dense clouds covered the southern half of the island and obscured most landmarks.

There were virtually no artificial lights on the ground to guide the pilots. A complete nighttime blackout had been ordered after the December attack, and all civilian lights — whether from bulbs or flames — were extinguished at dusk. Car headlights were painted a dark color to dim them.

A Japanese submarine dispatched to Pearl Harbor with the task of aiding the planes to their targets on the docks never showed.

The pilots were more or less flying blind, calculating their targets simply by the direction and distance they’d traveled.

The bombs from one landed in the mountain foothills overlooking the city of Honolulu, shattering some windows on nearby Theodore Roosevelt High School.

“It woke everyone on Honolulu up,” Burlingame said.

The second plane likely dropped its bombs into the harbor water, as no trace of them was ever found. No one was injured or killed.

Potentially, 4,400 pounds of bombs landing on the intended target — the 1,010-foot dock on Pearl Harbor — would have been a seismic setback for America’s ability to wage war.

But Imperial Japan’s quixotic second raid instead triggered a chain of events that turned the tide of war in America’s favor in the Pacific.

The bombing raid was a wakeup call for U.S. military leaders concerning their vulnerability to long-distance bombing raids.

The Japanese propaganda ministry trumpeted the attack as a great victory and provided key information about the raid’s logistics, Burlingame said.

Based on radar plots, American intelligence analysts correctly deduced that the bombers had refueled using submarines at French Frigate Shoals.

“The Americans responded by putting a destroyer up at French Frigate Shoals for the rest of the war,” Burlingame said.

Doolittle Raiders The U.S. conducted its own daring long-distance bombing raid on April 18, 1942. Sixteen B-25s launched off the carrier USS Hornet in the Western Pacific. The Doolittle Raiders dropped bombs on Tokyo, Yokohama, Yokosuka, Nagoya and Kobe, delivering the intended message that the Japanese homeland was not invulnerable to Allied attack.

“It was probably the most effective bombing raid of World War II because it freaked out the Japanese so badly that they changed their war plans,” Burlingame said. To keep America truly out of the fight and away from the mainland, the Japanese concluded they had to seize the Hawaiian Islands, he said.

That would begin with an attack on the Midway Islands, about 1,300 miles west of Oahu, with the intention of crushing America’s carrier fleet.

Japan had intended to send H8Ks to collect crucial reconnaissance on U.S. carrier movements immediately before the battle, which commenced June 4, 1942. But the beefed-up patrols kept the refueling subs out of French Frigate Shoals, and the H8K missions had to be scratched.

The Japanese navy had no way of knowing that the U.S. — which had recently broken the enemy’s code — had set its own trap by dispatching the carriers USS Enterprise, USS Hornet and USS Yorktown north of Midway.

Had the Japanese kept secret the stealth and reach of the H8Ks, they might very well have learned of the positions of those U.S. carriers, which had left Pearl Harbor only days before June 4.

Instead, the Japanese carriers Akagi, Kaga, Soryu and Hiryu were caught by surprise and destroyed in the battle, which many historians regard as the most decisive of the war in the Pacific.