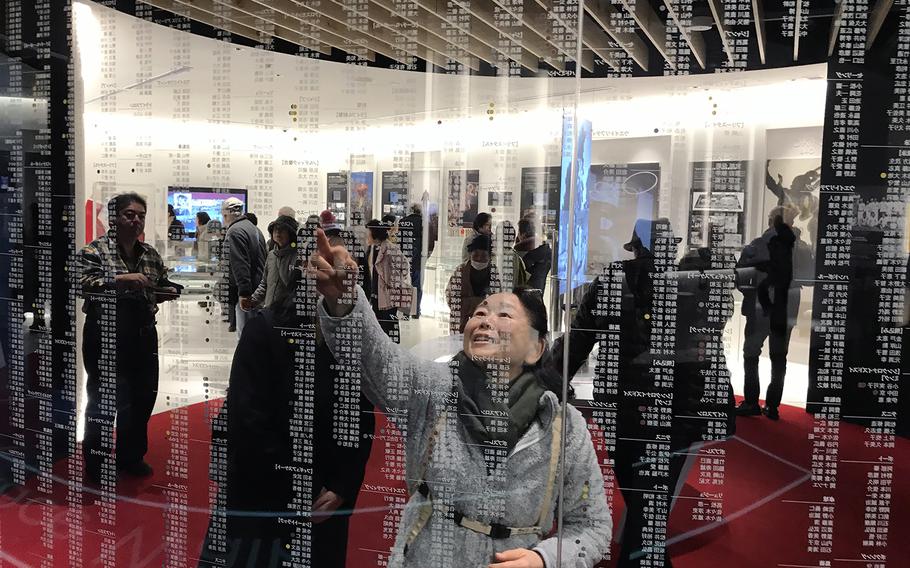 A woman points to the name of a past Japanese Olympian at the Japan Olympic Museum in Tokyo, Jan. 22, 2020. (Hana Kusumoto/Stars and Stripes)

A woman points to the name of a past Japanese Olympian at the Japan Olympic Museum in Tokyo, Jan. 22, 2020. (Hana Kusumoto/Stars and Stripes) 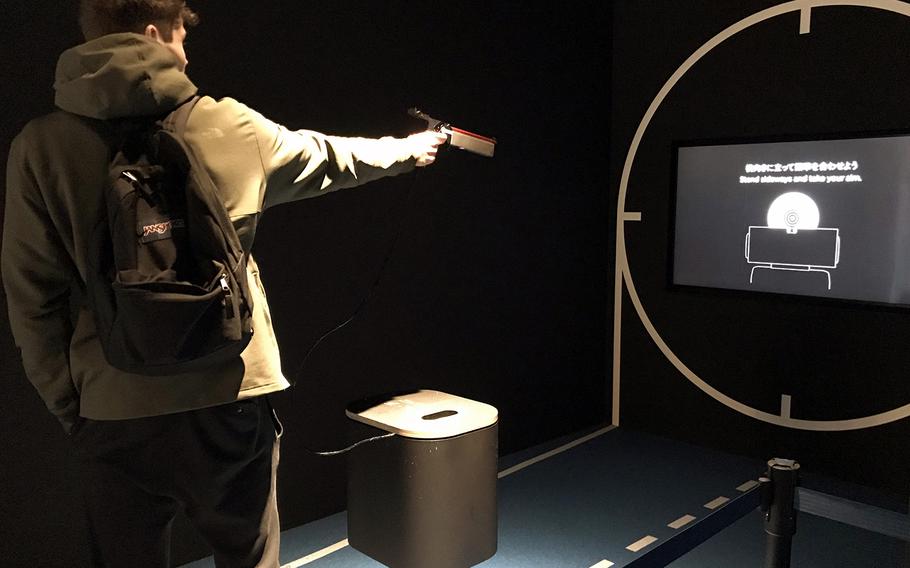 A visitor to the Japan Olympic Museum in Tokyo tries out a shooting simulator that allows people to compare their aim to an Olympic athlete, Jan. 22, 2020. (Hana Kusumoto/Stars and Stripes) 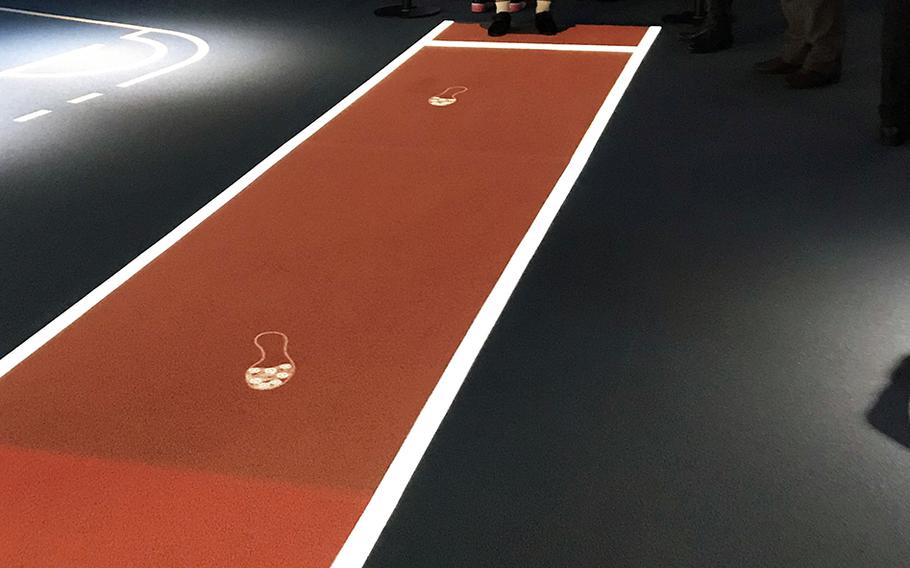 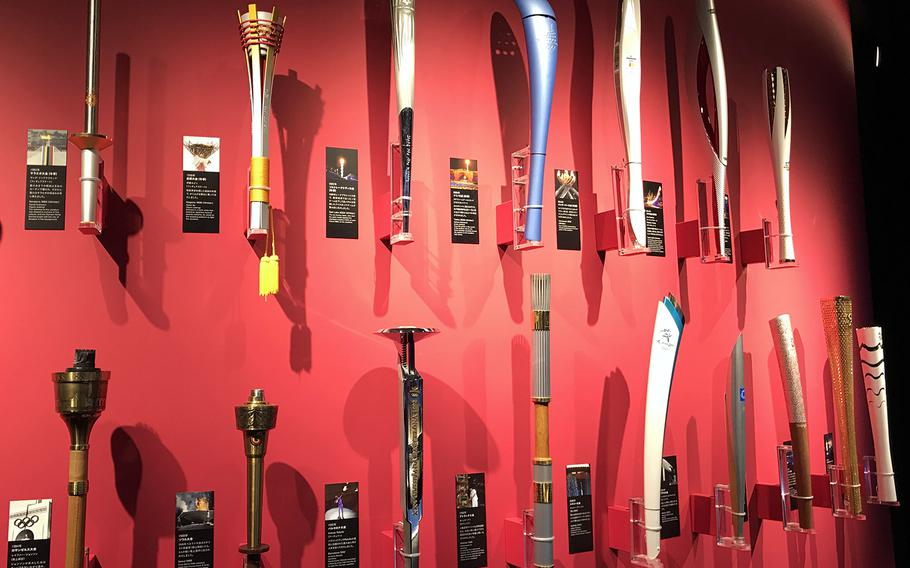 Torches used during past Summer and Winter Games are dispayed at the Japan Olympic Museum in Tokyo, Jan. 22, 2020. (Hana Kusumoto/Stars and Stripes) 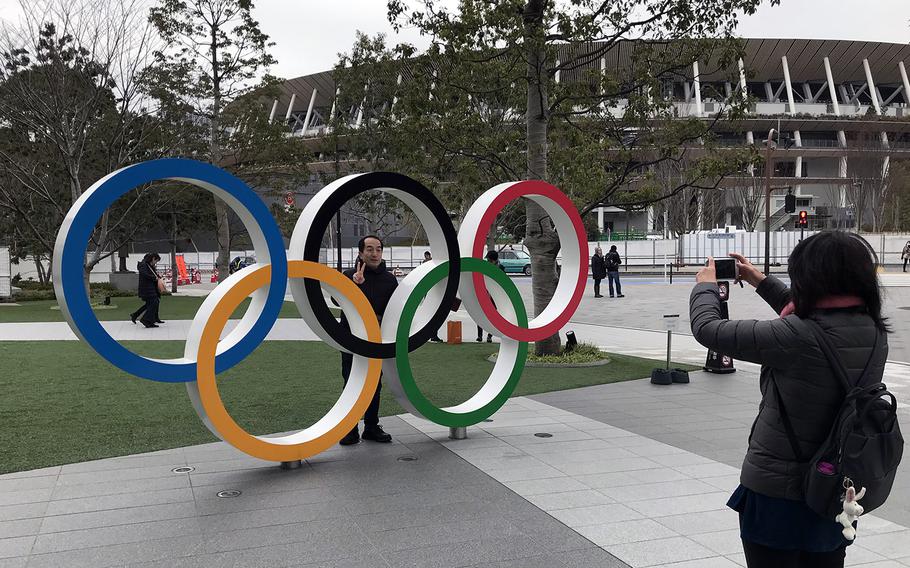 A visitor to the Japan Olympic Museum poses with the Olympic rings near the new National Stadium in Tokyo, Jan. 22, 2020. The stadium will host many events, including the opening and closing ceremonies, for the Summer Games. (Hana Kusumoto/Stars and Stripes)

With the Tokyo Olympics and Paralympics just around the corner, get psyched up for the games with a trip to the newly opened Japan Olympic Museum.

Just across the street from New National Stadium in central Tokyo’s Gaien area, this museum offers history and insight to the Olympics and Paralympics.

Visitors are first welcomed by a large Olympic rings statue outside of the museum. Even on a cold winter day, visitors lined up to take photos by the rings with the new stadium in the background.

The small, two-story museum opened in September to promote the Tokyo Olympics and Paralympics and illuminate the history and significance of the games.

The first floor is free to enter, with a small museum shop, cafe and a big-screen TV showing memorable moments of past Olympics. Visitors may browse a small library of books on the Olympics and settle on nearby sofas for a read.

At a table holding paper for origami, visitors are encouraged to fold the paper according to instructions and write messages for the Japanese athletes participating in the Summer Games.

On the day I visited, a small display highlighted the role of Pierre de Coubertin, father of the modern Olympics.

The second floor, which costs 500 yen for adults, offers a detailed history of the Olympics and of Japan’s participation in the games. The history starts with the ancient Greek Olympics and continues into the beginning of the modern Olympics and how wars had affected countries’ participation.

A discus made from stone to show what the Olympians in the ancient Olympics were using is on display. I was surprised how heavy it was as I was unable to lift it with one hand.

Also on display were torches used in past Olympic opening ceremonies going back to the 1936 Berlin Games, which inaugurated the torch relay. A costume worn by a performer during the closing ceremony at the 2016 Rio de Janeiro Olympics is part of the collection.

One section is devoted to Japan’s participation in the Olympics. In it, visitors will find posters and tickets from Olympics held in Tokyo, Sapporo and Nagano. There is also a display on the 1940 Tokyo Olympics, which was canceled due to war. The exhibit features posters and tickets meant for those events.

At one section, visitors imitate a ski jumper and jump onto a cushion to measure their balance and then compare the result to how an Olympic athlete would perform. There were also videos on the Paralympic Games and interviews of Olympic athletes.

Although the museum is small, it’s an in-depth learning experience that’s definitely worth a visit if you’re in the area.

DIRECTIONS: First and second floors of Japan Sport Olympic Square at 4-2 Kasumigaoka-machi, Shinjuku Ward, Tokyo; A 5-minute walk from exit 3 at Gaienmae Station on Tokyo Metro’s Ginza line; 10 minutes from exit 2 at Kokuritsu Kyogiyo Station on the Toei Oedo line; 12 minutes from Sendagaya or Shinanomachi stations on the Chuo and Sobu lines.

TIMES: Open daily (except Mondays), 10 a.m. to 5 p.m. Must enter before 4:30 p.m. If a Japanese holiday falls on a Monday, it is open on that day but will be closed on the following day. Also closed during the end of the year and New Year holidays. Could be closed on an irregular basis. Check the website for closing dates.

COSTS: Admission is free for the first-floor exhibits. 500 yen for adults and 400 yen for those 65 years or older for the second-floor exhibit. High school students and younger enter for free.

FOOD: A small cafe within the museum sells beverages. There are a variety of restaurants around the nearby train stations.