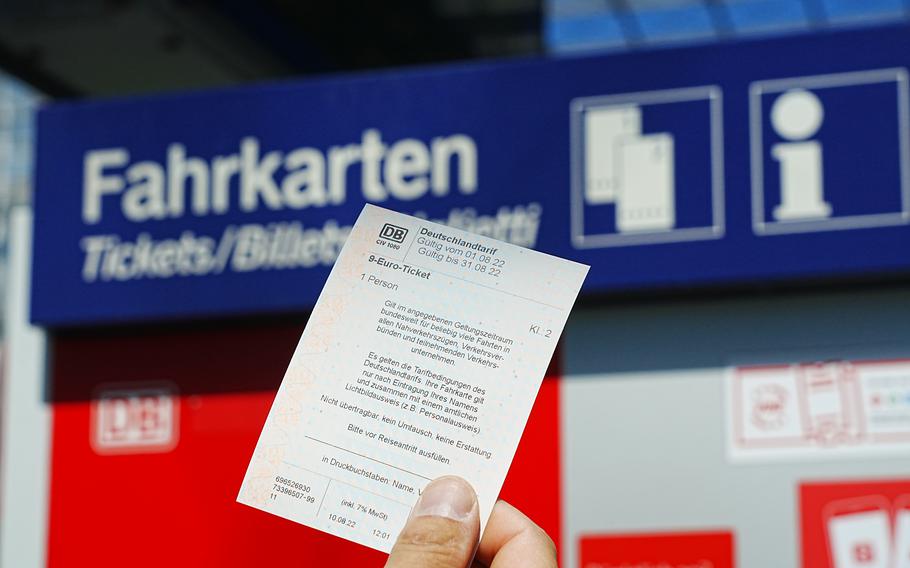 The first 9-euro monthly train ticket was released in Germany in June 2022. A follow-on version, this time priced at 49 euros per month, is slated to go on sale in January. (Volker Emersleben/German Railways)

Germany approved a plan for a new nationwide flat-rate ticket for local buses and trains next year on the heels of its popular experiment this summer with monthly tickets costing just 9 euros.

Federal and state transportation ministers agreed this week to a proposal for an offering priced at 49 euros per month. The tens of thousands of U.S service members, Defense Department personnel and their families living in Germany would be eligible to purchase the tickets.

The government has a tentative target date of Jan. 1 for introducing the new tickets.

Financing for the ambitious plan, however, is still delayed.

The Association of German Transport Companies said federal and state governments need to come to an agreement on financing before a 49-euro ticket can become a reality.

“We run the risk of having to discontinue massive public transport offers across the board because they can no longer be financed due to (energy) cost increases,” general manager Oliver Wolff said in a statement.

The summertime 9-euro tickets were a big hit with travelers. In only three months, more than 52 million of them were sold, according to a government report. The German government subsidized that program with 2.5 billion euros to make up for states’ lost revenue from ticket sales.

If agreed upon, the federal government is expected to contribute 1.5 billion euros, with German states shouldering a collective 3 billion euros toward the plan, according to a statement by the German Transportation Ministry.

In August, Chancellor Olaf Scholz called the 9-euro ticket “one of the best ideas” of his government, and he is expected to support a renewal of the idea in some form.

The 49-euro ticket is expected to be available as a digital pass or plastic wallet card valid for a month at a time. Travelers must buy it with a monthly subscription that automatically renews the ticket unless they cancel it.