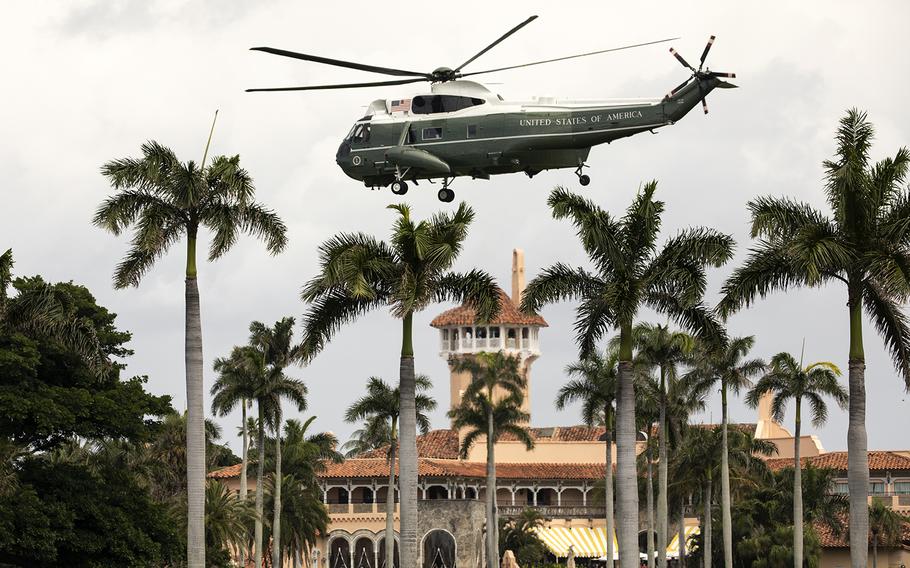 Marine One lifts off after returning President Donald J. Trump to Mar-a-Lago in Palm Beach, Fla., on March 29, 2019. (Wikimedia Commons)

A key witness in the ongoing Justice Department and FBI investigation of Donald Trump’s alleged mishandling of classified documents is a Navy veteran who followed the former president to Florida after serving as a valet in the Trump White House, people familiar with the matter said.

Walt Nauta is the witness in question, according to these people, who spoke on the condition of anonymity to discuss an ongoing investigation. The 39-year-old worked as a valet for Trump in the Oval Office suite, according to former White House staffers, and served as a personal aide at Mar-a-Lago, Trump’s residence and private club in Florida.

The Washington Post reported Wednesday that an unnamed Trump employee had provided critical evidence to investigators — telling them that he moved boxes at the former president’s request at a time when the government was seeking the return of classified material, including some highly sensitive items, from Mar-a-Lago.

The witness account was corroborated by security-camera footage, the people familiar with the case said, giving investigators key evidence of Trump’s behavior as they probe potential crimes including obstruction, destruction of government records or mishandling classified information.

The information Nauta provided to FBI agents, and the footage described to The Post, offer the most direct account to date of Trump’s actions and instructions leading up to the FBI’s Aug. 8 search of his Florida property.

The search came after the Justice Department demanded the return of all classified documents from Mar-a-Lago. Aides to Trump handed over 38 documents in June in response to a grand jury subpoena, but FBI agents found 103 more when they returned to Mar-a-Lago in August.

When FBI agents first interviewed Nauta, he denied any role in moving boxes or sensitive documents, the people familiar with the situation said in interviews before Nauta’s name became public. But as investigators gathered more evidence, they questioned him a second time and he told a starkly different story — that Trump instructed him to move the boxes, these people said.

Trump spokesman Taylor Budowich declined to answer specific questions about those assertions on Wednesday, instead charging that the Biden administration “has weaponized law enforcement and fabricated a Document Hoax in a desperate attempt to retain political power.”

Asked about Nauta’s account on Thursday, Budowich questioned the legality of the court-approved search of Mar-a-Lago and accused the Biden administration of “colluding with the media through targeted leaks in an overt and illegal act of intimidation and tampering.”

The people familiar with the Mar-a-Lago investigation said agents have gathered evidence indicating that Trump told people to move boxes to his residence after his advisers received the subpoena. That description of events was corroborated by the security-camera footage showing people moving the boxes, the people said.

Separately, FBI agents interviewed another key figure in the documents case last week: Christina Bobb, a lawyer who signed a June letter saying that a “diligent search” had been conducted for classified records at Mar-a-Lago and that all such documents had been given back to the government.

Bobb, whose interview with the FBI was first reported by NBC News, told agents that she signed the letter at the request of other lawyers and was not aware of the details of the search, a person familiar with the matter said. The person, who spoke on the condition of anonymity to disclose private conversations, said Bobb told the FBI she was skeptical of signing the letter and insisted on adding a disclaimer clause saying it was based on the information provided to her by others.

Bobb has told other Trump advisers that she has done nothing wrong and acted based on what she was told by Trump attorney Evan Corcoran, who handled the search for documents in response to the subpoena.

A person familiar with Bobb’s account said she was called by Trump adviser Boris Epshteyn a day before the June 3 meeting with the Justice Department and asked to attend the session with Corcoran, whom she had never met. The person, who also spoke on the condition of anonymity to relay Bobb’s account, said Bobb told agents Corcoran informed her that the storage room had been thoroughly searched — and indicated it was the only area of the club that needed to be searched.

Corcoran’s search for classified documents in response to the subpoena did not include the president’s private residence, a person with knowledge of the situation said.

Nauta is originally from Guam, according to public records. He enlisted in the Navy and eventually became a cook in the White House mess, a small dining facility run by the Navy in the basement of the West Wing. In 2013, he entered a military culinary competition, part of a team representing “presidential food service.”

Not long after Trump took office, Nauta left the mess to become one of Trump’s valets, spending some of his workday in a small passageway that connects the West Wing to a private dining room. From there, he had access to a small refrigerator stocked with Diet Cokes, which he brought to the president in the Oval Office when Trump pressed a call button on his desk, said a former White House staffer who spoke on the condition of anonymity to discuss activities inside the White House.

Nauta frequently served as a kind of gofer, fetching any items the president might need throughout the day and tidying up the room, the former staffer said. When Trump left the Oval Office for the night, it was Nauta who brought his coat. Their daily proximity meant that the two developed a close professional relationship, and Trump “trusted him completely,” this person added.

As part of his valet responsibilities, Nauta also moved boxes containing papers for Trump between the Oval Office and a private study, as well as a private dining room that Trump used as an informal office, the former staffer said. Trump routinely took classified documents to that dining room, mingled with newspaper articles and other papers, according to multiple former White House officials who have said Trump never strictly followed the rules and customs for handling sensitive government material.

The boxes that Nauta is said to have moved at Trump’s direction at Mar-a-Lago also contained classified documents mixed with newspaper articles, according to people familiar with the case.

The former staffer described Nauta as friendly and pleasant to Oval Office visitors. In September 2020, Nauta was promoted to senior chief petty officer, a significant career advancement. When Trump left the White House, Nauta decided to join him at Mar-a-Lago.

Campaign finance records show that Nauta was placed on the payroll of a Trump political action committee, Save America, in 2021. He was on payroll as recently as August, making $5,227.81 a paycheck, or about $135,000 a year, according to Federal Election Commission filings.

The Washington Post’s Lori Rozsa in West Palm Beach, Fla., and Alice Crites and Rosalind S. Helderman in Washington contributed to this report.