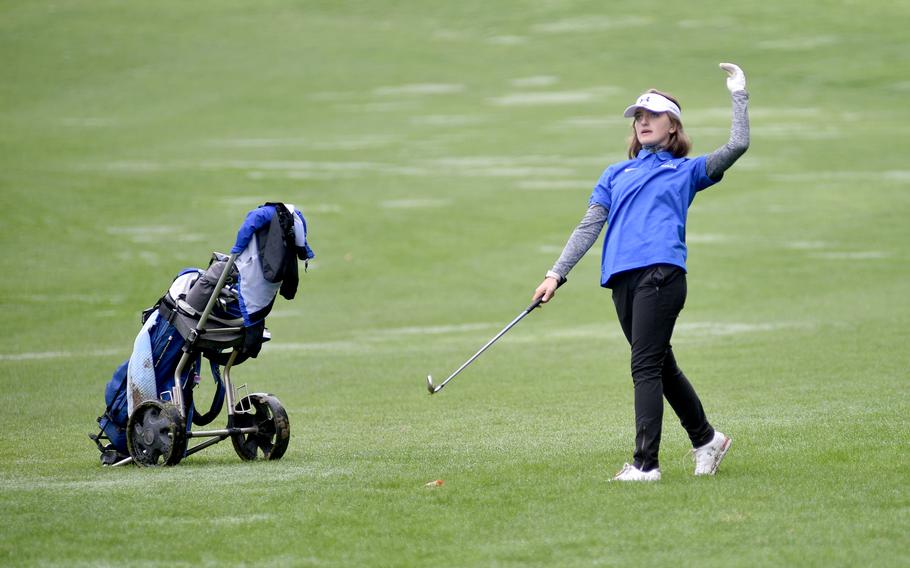 Victoria Bonavita of Rota finishes her swing at the No. 6 hole during the DODEA European championships at Rheinblick Golf Course in Wiesbaden, Germany. (Matt Wagner/Stars and Stripes)

You would think the duo were old friends. However, Grieve and Rothas had not met before being placed in the same group at the Rheinblick Golf Course in Wiesbaden on Wednesday.

“This is my first time meeting him,” Grieve said. “I feel like we have bonded since me and him are around the same skill level, so we weren’t really ahead of each other. So, we were trying to surpass each other and beat each other every hole. So, I think that’s where we bonded.”

Grieve and Rothas played the course with Stuttgart’s Mark Heinz, taking about four hours to complete the round. It was enough time to make a bond.

It could be seen on the 17th hole, when someone on another hole noticed a club was left behind. Grieve went back to retrieve it, while Rothas pushed Grieve’s bag along until he returned.

For Grieve, not talking to your fellow competitors actually adds pressure, of which the magnitude of the competition and the difficulty of the course create plenty. 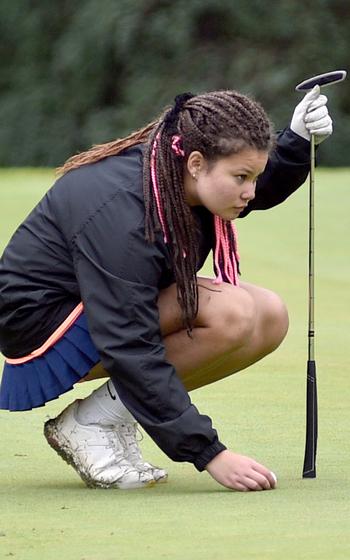 Taylor Kreimeier of Stuttgart places her ball down on the No. 6 green Wednesday during the first day of the DODEA European golf championships at the Rheinblick Golf Course in Wiesbaden, Germany. (Matt Wagner/Stars and Stripes) Shealee Moneymaker of Kaiserslautern tees off at hole No. 5 Wednesday during the first day of the DODEA European golf championships at Rheinblick Golf Course in Wiesbaden, Germany. (Matt Wagner/Stars and Stripes) Casper Waldeck of Naples swings Wednesday during the first day of the DODEA European golf championships at the Rheinblick Golf Course in Wiesbaden, Germany. (Matt Wagner/Stars and Stripes)

“I feel like if you go through the whole 18 holes not saying anything or talking to anyone, it definitely will get to you,” Grieve said. “I’ve played 18 holes by myself, nine holes, and it’s not really the best because you don’t have the same connection.”

The two weren’t the only ones talking and getting to know one another along the course.

The girls group of Kaiserslautern’s Asia Andrews, Rota’s Victoria Bonavita and Stuttgart’s Taylor Kreimeier shared a laugh as they headed to the 18th green and once the round was complete.

The three finished the day in the top three spots, with Andrews leading with 15 points and Kreimeier and Bonavita both at 9 points on the modified Stableford scoring system that gives those with the fewest strokes the most points. Despite being rivals, however, it wasn’t just about winning for at least one of the golfers.

“For me, it’s not all business,” Bonavita said. “I’m told by my parents and my coach, it’s important to have fun and know that you’re doing the best you can even if you don’t win. It’s important to keep that in mind and bond with the people because it’s always good to have good people to golf with.”

This bond between competitors isn’t all that uncommon, according to Kaiserslautern coach Andy Dager.

He pointed to the length of time it takes to complete 18 rounds as one major reason why.

“I think they definitely make some connections,” Dager said. “You’ll often hear of players still contacting each other after the tournaments are over because they switched phone numbers or whatever and they get to know each other. It’s a long time to walk and talk.”

As for the play, Heinz leads on the boys competition by eight points with a total of 36. Christian Waldeck is in second with 28 while Jonah Harvey and Tristin Kim are tied for third with 26.

In the team competition, Wiesbaden has amassed 90 points and leads Ramstein by 10.

As for Rothas and Grieve, they sit in eighth and 10th with 21 and 19 points, respectively. Both said they struggled on the course Wednesday, but they expect to have a better time of it on the second day.

“I did OK,” Rothas said. “I wish I had done a little bit better, but I’m not super disappointed with my performance today.

“I think I’ll do better tomorrow (Thursday). I’m fully warmed up and in the groove.”