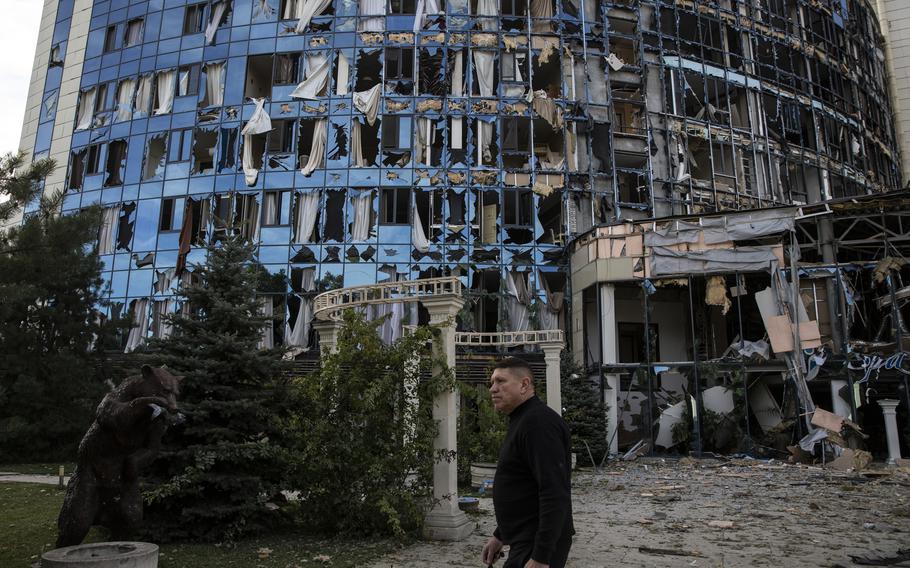 The Misto Hotel and Spa after it was blasted by a Russian attack in Kharkiv, Ukraine, on Sept. 9. (Heidi Levine/The Washington Post)

KHARKIV, Ukraine — Ukrainian forces have clawed back significant territory in the northeast of the country, officials announced this week, in what could amount to one of their most significant successes in pushing back the invading Russians since the war began.

On Thursday, nearly seven months into the war, Ukrainian officials claimed that troops had regained control of hundreds of square miles of land in the Kharkiv and Kherson regions, which border Russia, and liberated more than 20 settlements in little more than a week. By Friday, Ukrainian President Volodymyr Zelensky said more than 30 settlements in Kharkiv had been liberated.

After announcing an attack on the Russian-occupied city of Balakliia earlier this week, videos circulated on social media showing Ukrainian soldiers raising the blue and yellow flag and emotional civilians greeting them.

Taking control of Balakliia could offer the Ukrainians a strategic opportunity to push farther toward the occupied town of Izyum, which Russian forces have been using as a staging ground for their attacks throughout the eastern Donbas region.

On Friday, Russian state television made a rare acknowledgment of the Ukrainian advances when Vitaly Ganchev, the head of Russia’s administration in the occupied parts of Kharkiv, described them as occurring at a “very sharp and rapid” pace. Footage also showed what appeared to be Russian tanks heading toward Kharkiv in a bid to reinforce the area.

Pro-Kremlin military analysts on Friday also shared a map of Ukraine’s advances into the occupied territories, showing significant gains after Kyiv’s forces raised their flag again in Balakliia, a critical juncture in the Kharkiv area.

The surprise advance in Kharkiv is occurring alongside a Ukrainian offensive near the southern city of Kherson, where Ukrainian forces have recently launched an aggressive push to reclaim the strategic port city. The larger Kherson region helps form Russian President Vladimir Putin’s coveted land bridge to Crimea, the peninsula invaded and annexed by Russia in 2014.

The recent advances are offering a boost of optimism to Ukrainians, who hope the operations will put Moscow on the back foot and force them out of many occupied areas before winter. Zelensky repeatedly has articulated his hope of such gains, and in a visit to Kyiv on Thursday, U.S. Secretary of State Antony Blinken pledged enduring support for Ukraine.

Still, Russia continues to control significant territory inside Ukraine and continues to showcase its capacity to launch strikes across the country.

Despite some Ukrainian successes in the region, Russian forces still struck Kharkiv, Ukraine’s second-largest city, on Friday, blasting away one side of the Misto Hotel and Spa with a salvo of rockets. The strike also hit a nearby school and residential buildings, wounding 14 in all, including three children.

The city, which has come under repeated attack since February, is now split between a sense of normalcy and war. Rose beds are still carefully tended in the median of some streets near the city’s center, not far from where the buildings were badly damaged.

Traffic was light but moving freely across the city on Friday. Many store windows were boarded up or banked with sandbags, but some stores were open and electric street cars operated along many main boulevards. Several camouflaged tanks were positioned on the road into the city.

Kharkiv residents know that the offensive pushing eastward could bring more attacks. Yura Miroshnikov, for example, came to see what was left of the building where he worked for 20 years before it shut down at the beginning of the invasion.

“Don’t come any closer,” a man shouted from a gaping window on a high floor, where he had already begun the hopeless task of knocking shards down.

“It’s getting bigger,” Miroshnikov said of the fighting around the city. “My apartment is in the 14th floor, I can see it all around.”

Still, he is excited by what he hears of Ukrainian progress in the region. “I think we should fight all the way to Belgorod,” he said, citing a Russian city 50 miles to the north.

Blinken visited Kyiv on Thursday in a show of support for Ukraine as the White House announced an additional $675 million worth of military supplies to Kyiv.

The weapons in that package include high-speed antiradiation missiles, remote-detonated antitank mines, 105mm howitzer cannons and rounds for rocket artillery systems. The United States is also providing about $2 billion in security assistance to Ukraine and 18 of its neighbors.

Blinken’s visit was largely focused on Ukraine’s recent counteroffensive operations, which he described as “underway and proving effective.”

Ukraine’s counteroffensive also forced Russian officials to postpone staging a referendum in the Kherson region, a precursor to annexing the occupied territory with a veneer of procedural legitimacy. Occupations officials had hoped to stage the “vote” in September.

But this week, the head of Russia’s governing party, United Russia, said it would be “right to hold a referendum on unification” with Russia on November 4. The regional head of Crimea, Sergei Aksyonov, suggested on Telegram that Russia should just take the Ukrainian territory without any vote at all, as such an annexation vote “won’t be recognized by the West anyway.”

“We continue to say that this is mainly a question that has to do with the will of those people who live in these territories,” the Kremlin spokesperson Dmitry Peskov said Friday.