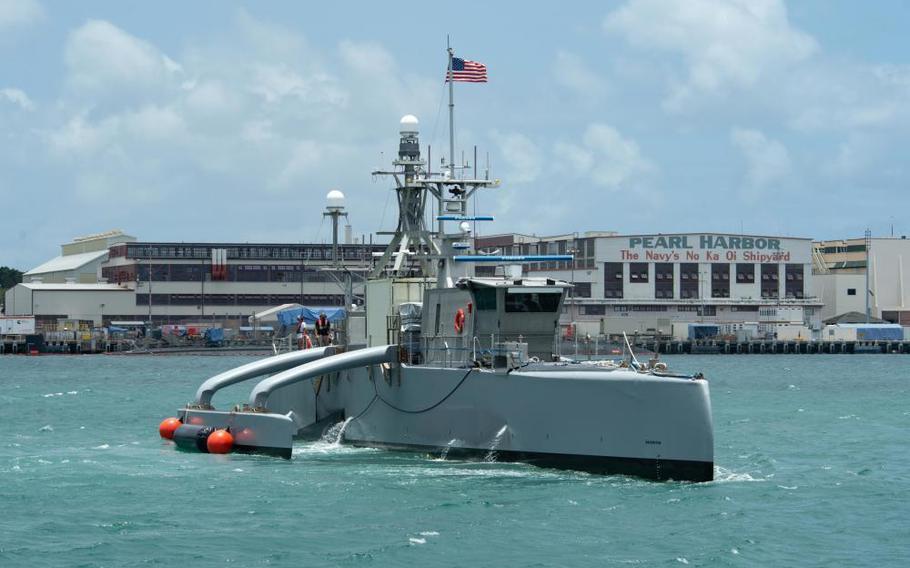 In this image provided by the U.S. Navy, a Sea Hunter, a crewless vessel, arrives at Pearl Harbor, Hawaii, to participate in the Rim of Pacific (RIMPAC) 2022, on June 29, 2022. The Navy is expediting development of drone ships aimed at expanding the reach of offensive firepower while keeping sailors on traditional warships farther from harm's way. (U.S. Navy photo by Mass Communication Specialist 2nd Class Aiko Bongolan, via AP) (Aiko Bongolan)

The US Navy is working to develop drone ships as it faces a growing threat from China. The Navy envisions robotic vessels keeping an electronic eye on enemy forces across the vast Pacific Ocean, extending the reach of firepower and keeping sailors out of harm's way. They also could be built for a fraction of the cost of conventional warships. The four largest crewless ships are all being used together for the first time this summer during war games in the Pacific Ocean. Smaller waterborne drones are being deployed by the Navy's 5th Fleet in the Middle East.

Facing a growing threat from China, the Navy envisions drone ships keeping an electronic eye on enemy forces across the vast Pacific Ocean, extending the reach of firepower, and keeping sailors out of harm's way.

The Navy is speeding development of those robotic ships as an affordable way to keep pace with China's growing fleet while vowing not to repeat costly shipbuilding blunders from recent years.

The four largest drone ships are being used together this summer during a multination naval exercise in the Pacific Ocean.

Other smaller waterborne drones are already being deployed by the Navy's 5th Fleet in the waters off the Middle East.

The goal in coming years is to see how these research vessels' radar and sensors can be combined with artificial intelligence, and integrated with traditional cruisers, destroyers, submarine and aircraft carriers, to create a networked fleet that's resilient because it's spread over greater distances and more difficult for enemies to destroy, the Navy says.

"It's about moving the technology forward, and having confidence in the capability. Everything takes time," said Cmdr. Jeremiah Daley, commanding officer of Unmanned Surface Vessel Division One in California.

The Navy believes the technology can help with the three keys for military success — weapons range, scouting, and command and control — at a lower cost and risk to personnel, said James Holmes, a professor at the Naval War College in Newport, Rhode Island.

But all of those benefits must be proven, along with long-term durability in a harsh saltwater environment, he said.

"We're sort of in Jerry Maguire 'show me the money' territory with the tech. It will undoubtedly be useful, but whether it will be a game-changer is far less clear," said Holmes, who doesn't speak for the Navy.

Before moving forward, the Navy must first to win over a skeptical Congress after a series of shipbuilding debacles.

Its speedy littoral combat ships have had propulsion problems, leading to early retirements. The "Advanced Gun System" on its stealth destroyer was a bust because of expensive ammo. And its newest aircraft carrier had problems with elevators and a new system to launch aircraft.

Critics said the Navy rushed to cram too much new technology onto those ships, leading to failures and growing costs.

"We can't just throw all the resources at (robotic ships) with the track record of 20 years of failed ship programs," said Democratic Rep. Elaine Luria of Virginia, who is a retired Navy officer.

The Navy's Unmanned Task Force is taking a new approach, using a military equivalent of a venture capital model to expedite new ideas, and moving forward only after technologies are proven, said Michael Stewart, the director of the task force.

Those include the Sea Hunter and Sea Hawk, diesel-powered ships equipped with outriggers for stability in rough seas. The other two are Ranger and Nomad, which are based on oil platform replenishment ships. They have large flat decks from which a missile was successfully fired last year.

While those larger vessels are tested in the Pacific, the Navy is already seeing promising results with smaller, commercially available vessels that are being assessed by Task Force 59, which is part of the 5th Fleet in Bahrain, said Cmdr. Timothy Hawkins, 5th Fleet spokesperson.

One of the vessels that received attention is the Saildrone, a sail-powered vessel with solar-powered systems. Equipped with radar and cameras, Saildrones are touted as being able to operate autonomously for months at a time without maintenance or resupply.

Based on the success of multinational exercises last winter, the 5th Fleet said the U.S. Navy and international partners intend to deploy 100 crewless vessels by next summer.

The Navy's spending proposal for the new fiscal year includes $433 million for crewless surface vessels and $284 million for underwater vessels.

Those vessels coupled with artificial intelligence have the potential to make the Navy's fleet much more effective, said Gilday, the Navy's top officer. But the Navy is going about research and development "in an evolutionary, deliberate, informed kind of way," he said.

The biggest advantage of robotic ships is that they could be built at a fraction of the cost of conventional warships as the Navy struggles to keep pace with China and Russia, said Loren Thompson, defense analyst at the Lexington Institute. The U.S. already lags behind China in ship numbers, and the gap is growing each year.

But Congress isn't rushing into funding new programs, said Bryan Clark, a defense analyst at the Hudson institute. "Congress wants the Navy to have a good plan — and then pursue it aggressively," Clark said.

On Capitol Hill, Luria said there may be a place for crewless ships, perhaps in replacing missile capability for ships the Navy wants to retire. But there's a lot of research and development necessary to convince Congress to heavily invest in ships without any sailors.

Sen. Mazie Hirono, chair of the seapower subcommittee, said Gilday has assured her that the Navy is "conscious of not moving too quickly on unproven technology."

"The Navy must get this right the first time and support rigorous testing with prototypes before committing to buying a fleet," said Hirono, D-Hawaii.