Sanctions forcing Russia to use appliance parts in military gear, US says 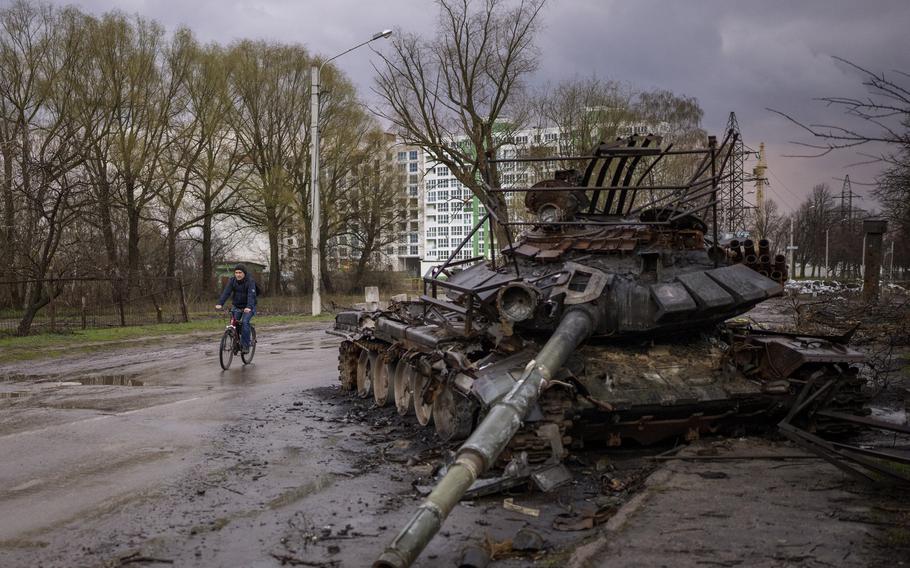 A man rides his bicycle next to a destroyed Russian tank in Chernihiv, Ukraine, on Thursday, April 21, 2022. (Emilio Morenatti/AP)

U.S.-led sanctions are forcing Russia to use computer chips from dishwashers and refrigerators in some military equipment, Commerce Secretary Gina Raimondo said Wednesday.

"We have reports from Ukrainians that when they find Russian military equipment on the ground, it's filled with semiconductors that they took out of dishwashers and refrigerators," Raimondo told a Senate hearing, noting that she recently met with Ukraine's prime minister.

U.S. technology exports to Russia have fallen by nearly 70% since sanctions began in late February, according to Raimondo, whose department oversees the export controls that form a big part of the sanctions package. Three dozen other countries have adopted similar export bans, which also apply to Belarus.

"Our approach was to deny Russia technology — technology that would cripple their ability to continue a military operation. And that is exactly what we are doing," she said in a response to a question from Sen. Jeanne Shaheen, D-N.H., about the impact of the export controls.

The semiconductor anecdote came from Ukrainian officials, who told the secretary that when they've opened up captured Russian tanks, they've found parts from refrigerators and commercial and industrial machinery that appear to be making up for other unavailable components, Commerce Department spokeswoman Robyn Patterson said.

The number of U.S. shipments to Russia of items subject to the new rules — semiconductors, telecommunications equipment, lasers, avionics, and maritime technology — has decreased 85% and their value has decreased 97%, compared with the same time period in 2021, Patterson said.

In her Senate remarks, Raimondo also pointed to recent reports that two Russian tank manufacturers have had to idle production due to a lack of components. The White House, too, has previously highlighted those reports, saying that Uralvagonzavod Corporation and Chelyabinsk Tractor Plant have halted production.

Computer chips, also known as semiconductors, are the brains that operate most modern electronics, from appliances to fighter jets. Russia manufacturers few of its own chips, historically relying on imports from Asian and Western companies.

The world's biggest computer chip companies began cutting off deliveries to Russia in late February, after the U.S.-led restrictions kicked in.

The United States and other Western nations already had regulated sales to Russia of chips and other electronic components specifically designed for military use. Those sales required a government license to proceed even before Russia's recent invasion of Ukraine.

The new rules tightened those restrictions and also blocked the sale of most dual-use chips, which have both military and commercial applications, to nonmilitary users in Russia, including those in high-tech industries.

The Biden administration said the ban would cut off more than half of Russia's high-tech imports and kneecap the country's ability to diversify its economy and support its military. The ban was not designed to block deliveries of consumer electronics.

In a novel move that the United States has used only once before — against China's Huawei — it is also requiring companies worldwide to abide by the rules and block such sales to Russia if they use U.S. manufacturing equipment or software to produce chips. Most chip factories around the world use software or equipment designed in the United States, analysts say.

Previous research has shown Russia's military has long relied on western electronics. Russian military drones shot down over Ukraine in recent years have been full of Western electronics and components, according to investigators from the London-based Conflict Armament Research (CAR) group, who dissected the drones.