USPS just delivered a letter from an American soldier in Germany. It was 76 years late. 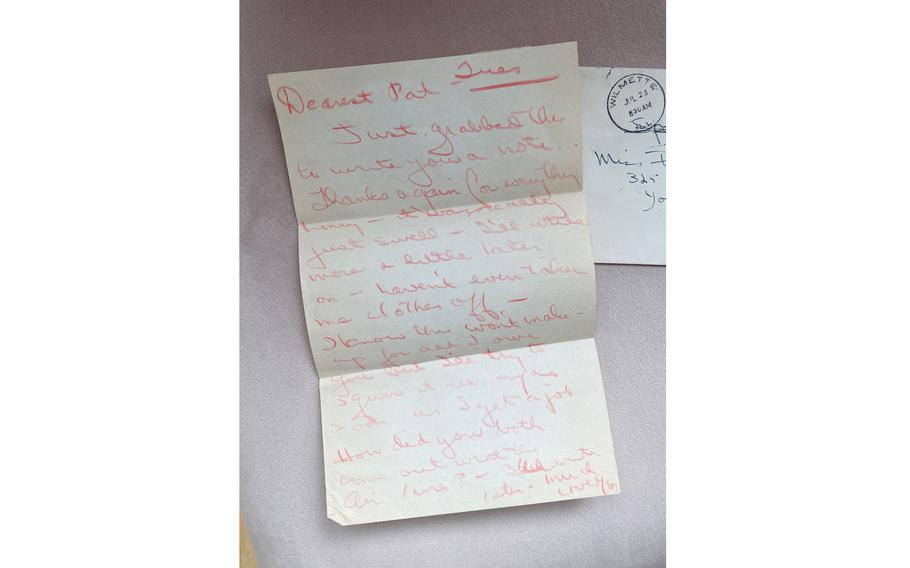 Angelina “Jean” Gonsalves, 89, was astonished to hold the airmail envelope in her hand after her mail carrier dropped it off at her home in Woburn, Mass., just outside Boston. (Courtesy of Chelsey Brown)

American soldier John Gonsalves was serving in Germany in the aftermath of World War II when he wrote a letter to his mother in Massachusetts in 1945. Last month, the U.S. Postal Service finally delivered the letter to his family — 76 years late.

Angelina “Jean” Gonsalves, 89, was astonished to hold the airmail envelope in her hand after her mail carrier dropped it off at her home in Woburn, Mass., just outside Boston.

The letter, which had a 6-cent stamp, had been forwarded from a Pittsburgh mail facility, and was addressed to John Gonsalves’s mother, also named Angelina and long deceased, she said.

Her husband died in 2015 at age 92, so seeing his tidy handwriting again was like taking a trip back in time, said Gonsalves.

“Way, way back in time,” she said of the letter, which she received on Dec. 9. “Seventy-six years! I could hardly believe it when I looked at the date. For a letter from Johnny to suddenly show up out of nowhere was amazing.”

The letter was penned on long white paper and dated Dec. 6, 1945. John Gonsalves was a 22-year-old Army sergeant when he wrote it from Bad Orb, Germany, near a Nazi prisoner-of-war camp that had been liberated by American troops.

“Dear Mom — Received another letter from you today and was happy to hear that everything is okay,” it began. “As for myself, I’m fine and getting along okay. But as far as the food, it’s pretty lousy most of the time.”

Gonsalves wrote about the dismal weather in Germany and how he thought he’d be able to return to the United States in late January or early February. He ended with “Love and XXXXX — Your Son, Johnny,” and included a postscript: “I’ll be seeing you - soon, — I hope.”

“It sounded just like Johnny,” said Jean Gonsalves, noting that her husband enlisted in the Army in 1943 and served overseas for about three years.

When she sat down at her kitchen table to finish reading the letter, she almost felt like her late husband was in the room with her, she said.

“It was a weird feeling — like he was standing there, reading it to me,” said Gonsalves, who was married to John Gonsalves for 61 years.

“I smiled when I saw his beautiful handwriting,” she said. “I always loved how he wrote his E’s.”

Her regular mail carrier was excited when he rang her doorbell last month and delivered the letter, said Gonsalves.

“The mailman asked if my husband had been in the service, and I told him yes, but I didn’t know him then,” she said. “He said he thought the letter was something personal for me and he was really happy to give me the letter as priority mail.”

Inside the registered envelope, Gonsalves also found a letter from Stephen D. Stowell, who works at the U.S. Postal Service’s processing and distribution center in Pittsburgh.

“Enclosed please find a letter from your husband, John Gonsalves, to his mother dated December 6, 1945,” Stowell wrote. “We are aware of the passing of your husband in 2015 (our condolences). As his next of kin, this letter now passes to you.”

“We are uncertain where this letter has been for the past seven-plus decades, but it arrived at our facility approximately six weeks ago,” Stowell continued. “By virtue of some dedicated sleuth work by postal workers at this facility, we were able to determine your address, hence this letter delivery to you, albeit 76 years late.”

“Due to the age and significance to your family history delivering this letter was of utmost importance to us,” added Stowell, who did not respond to an interview request from The Washington Post.

Gonsalves said that when she phoned Stowell to thank him for forwarding the unopened letter, she was told that the U.S. Postal Service had no idea how it ended up in Pittsburgh after more than seven decades.

“They’re just not sure what happened, and I guess it really doesn’t matter,” she said. “I’m just so happy to have it. I would have been 13 when John wrote it.”

Gonsalves said she met her husband in 1949 — about five years after he dropped his letter in the mail. They worked together making sandals at the Marilyn Sandal Co. in Stoneham, Mass., she said.

“I was 17 and had just graduated from high school,” said Gonsalves, who grew up in Woburn, about 10 miles northwest of Boston. “John was nine years older than me. One day, I was waiting with my girlfriend to catch the bus after work and he drove by and asked if we’d like a ride home.”

About a month later, they went on their first date, then they married several years later on Oct. 25, 1953. John earned a degree in engineering and went to work for GTE Corporation, said Gonsalves, and the couple raised five sons together.

One of them, Brian Gonsalves, 54, said he and his brothers were delighted to read the letter from their father a few weeks before the holidays.

“I can picture my dad writing that letter to his mom, hoping he would soon be coming home to see her,” said Brian Gonsalves. “Although it never made it to his mom, it made it to mine. And we’ve all been on an amazing little journey because of it.”

Jean Gonsalves said her husband didn’t talk much about his military service, though she knew he’d seen some terrible things.

“He was a quiet man, and I believe he just wanted to put it behind him when he came home,” she said.

John Gonsalves was in his element when he was with his family, she said.

“There was nothing he loved more than taking the boys camping and hiking and fixing things up around the house for all of us,” she said. “I miss him every day.”

“It’s wonderful to now have this little piece of history from his life,” added Gonsalves. “Honestly and truly, it’s such a nice surprise to see a glimpse into his past.”