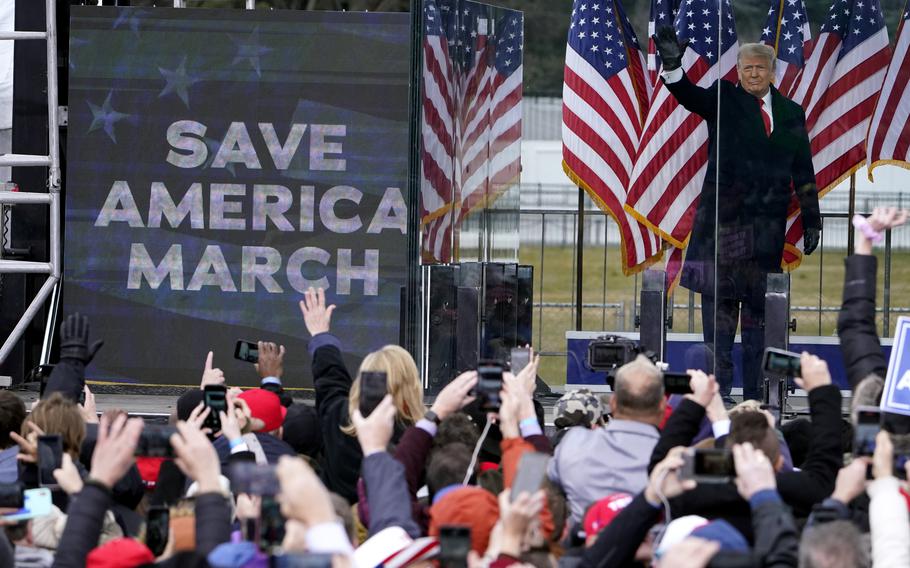 FILE - President Donald Trump arrives to speak at a rally in Washington on Jan. 6, 2021. On Monday, Jan. 10, 2022, attorneys for former President Trump and his associates argued in court that incendiary statements by Trump and others last Jan. 6 prior to the Capitol riot were protected speech and in line with their official duties. (AP Photo/Jacquelyn Martin, File) (Jacquelyn Martin/AP)

WASHINGTON — House panel investigating the U.S. Capitol insurrection issued subpoenas on Tuesday to two Republican strategists and a Trump administration official regarding their involvement in the planning and preparation of one of the rallies that preceded the attack.

"We have reason to believe the individuals we've subpoenaed today have relevant information and we expect them to join the more than 340 individuals who have spoken with the Select Committee as we push ahead to investigate this attack on our democracy and ensure nothing like this ever happens again," Thompson said in a letter Tuesday.

Worthington is a former Trump White House and campaign aide who served as a speechwriter and policy adviser. He had previously worked for former Republican House Speaker Newt Gingrich, a Trump ally.

Schwartz had no comment when reached by The Associated Press on Tuesday, and Surabian and Worthington did not immediately respond to requests for comment.

The panel has already interviewed more than 300 people as it seeks to create a comprehensive record of the Jan. 6 attack and the events leading up to it.

Trump at the time was pushing false claims of widespread voter fraud and lobbying Vice President Mike Pence and Republican members of Congress to try to overturn the count at the Jan. 6 congressional certification. Election officials across the country, along with the courts, had repeatedly dismissed Trump's claims.