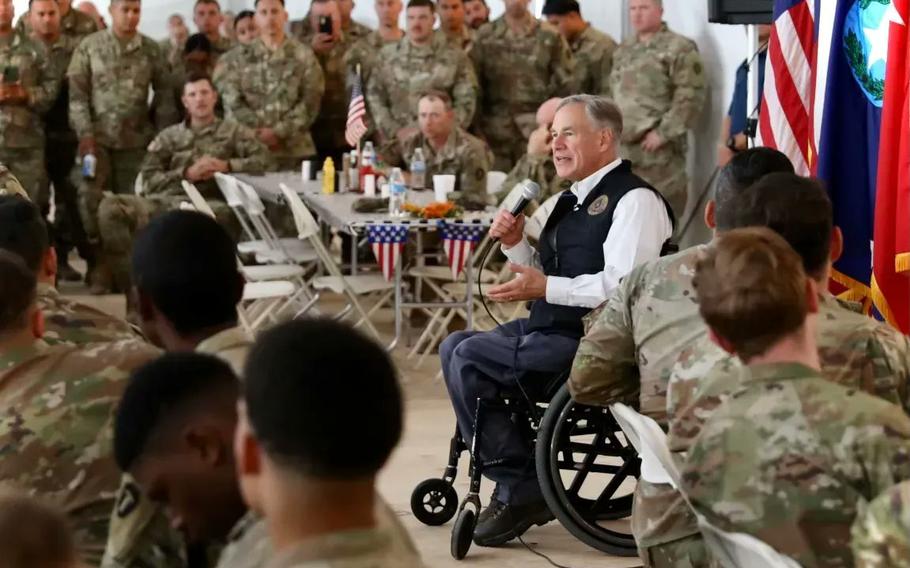 Texas Gov. Gregg Abbott meets in November with Texas National Guard troops deployed to the border with Mexico for a state mission. Abbott has pushed back against the Pentagon on a mandate for all troops to be vaccinated against the coronavirus and he said Tuesday that he intends to file a lawsuit to stop it. (Photo from Texas Military Department)

Texas Gov. Greg Abbott filed a lawsuit Tuesday against the federal government over the Defense Department’s mandate that all troops, including the National Guard, receive the coronavirus vaccine or face discharge from military service.

Abbott, along with fellow Republican governors of six other states, has said President Joe Biden and the Pentagon cannot order troops to be vaccinated unless they are deployed by the federal government. Otherwise, the troops are under the command of the governor.

The case is not about “a position of pro- or anti-vaccine,” according the lawsuit. “Instead, this case seeks protection from the federal government’s unconstitutional action to force Texas, through its governor, to submit to federal orders and impose federally dictated disciplinary action on its National Guardsmen,” according to the court documents filed in U.S. District Court for the Eastern District of Texas, Tyler Division.

The Air Force set a Dec. 2 deadline for all airmen to receive the vaccine. In Texas, about 90% of Air National Guard troops are fully vaccinated, according to the Texas Military Department. The remaining airmen are going through the exemption process.

The department could not provide data on Army National Guard troops because the deadline for them to receive the vaccine isn’t until June. However, the lawsuit states about 40% of soldiers and 220 airmen are refusing the vaccine for religious accommodations or other reasons.

The Texas lawsuit states the military’s vaccine mandate will “eliminate a substantial number of Air and Army National Guardsmen from the state’s military forces.” This loss will harm Texans during natural disasters when the Guard is frequently called upon to help, according to the lawsuit.

The lawsuit requests the court declare the mandate violates the U.S. Constitution and federal law and halt its enforcement on troops not deployed on federal orders.

Oklahoma Gov. Kevin Stitt also filed a lawsuit over the mandate, but a federal judge ruled last week against the state’s request for a preliminary injunction on the mandate, citing federal law allows for it. In his ruling, U.S. District Judge Stephen Friot noted the Defense Department mandates nine other vaccines for all service members.

Pentagon officials and Defense Secretary Lloyd Austin have said repeatedly that Austin has the authority to set medical readiness requirements.

Texas Attorney General Ken Paxton did not immediately respond to questions about how the Texas lawsuit is different from Stitt’s suit, but the court documents quote a federal judge’s decision released one day earlier that ruled in favor of sailors opposed to the vaccine mandate.

U.S. District Judge Reed O’Connor in Texas ruled the Navy cannot discipline 35 sailors involved in a lawsuit challenging the Pentagon’s coronavirus vaccine mandate. He said the Navy’s blanket denial of all religious waivers was a violation of sailors’ rights under the First Amendment and the Religious Freedom Restoration Act.

Meanwhile, the Marine Corps and Army have begun to discipline or discharge troops for refusing the vaccine.

In Texas, there are about 10,000 Guard troops deployed on state orders for a mission along the border with Mexico. Guard members deployed to the border have access to receive vaccines for the coronavirus and the flu through their unit, according to a statement from the Texas Military Department.

“The decision whether or not to receive a vaccination is a personal matter each service member must weigh. The Texas Military Department provides the resources necessary for each member to make informed decisions,” according to the statement.