US seeks balance as fears grow Russia may invade Ukraine 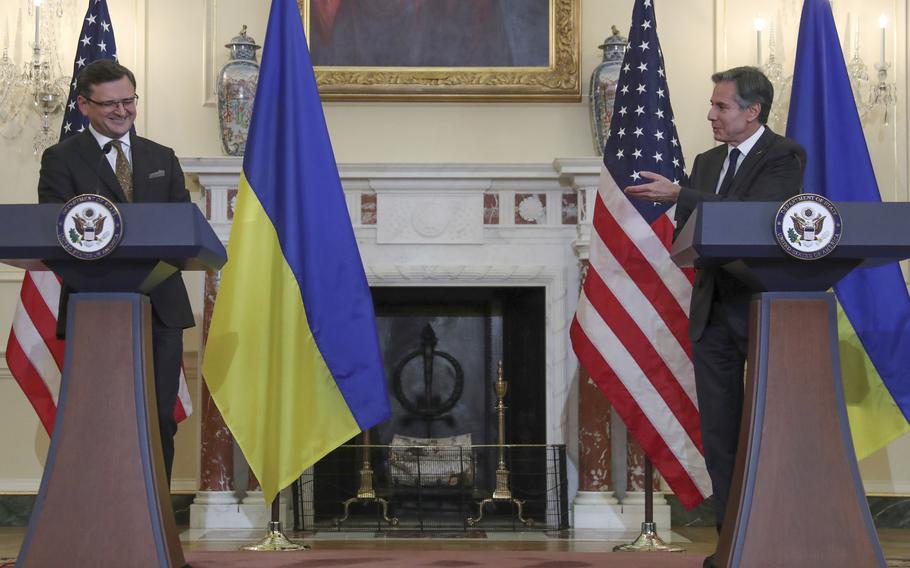 In this Nov. 10, photo, Secretary of State Antony Blinken and Ukraine’s Foreign Minister Dmytro Kuleba hold a news conference following the U.S.-Ukraine Strategic Dialogue talks at the State Department in Washington. The buildup of Russian troops near Ukraine has left U.S. officials perplexed, muddying the Biden administration’s response. Officials acknowledge they don’t have a good understanding of what Russian President Vladimir Putin is trying to accomplish. (Leah Millis/AP)

Some Republican lawmakers have been pressing the U.S. to step up military support for Ukraine. But that risks turning what may be mere muscle-flexing by Russian President Vladimir Putin into a full-blown confrontation that only adds to the peril for Ukraine and could trigger an energy crisis in Europe.

But a weak U.S. response carries its own risks. It could embolden Putin to take more aggressive steps against Ukraine as fears grow he could try to seize more of its territory. And it could cause more political damage for President Joe Biden at a time his popularity is dropping.

Knowing how to strike the right balance would be easier if the U.S. had a better understanding of what Putin was trying to accomplish. But top officials admit they don't know.

"We're not sure exactly what Mr. Putin is up to," Defense Secretary Lloyd Austin said Wednesday. A week earlier, Secretary of State Antony Blinken said, "We don't have clarity into Moscow's intentions, but we do know its playbook."

Rep. Mike Quigley, an Illinois Democrat and member of the House Intelligence Committee, said better understanding Putin's intentions was critical "to avoid the mistakes that have started great wars."

Any U.S. response must be calibrated to avoid being "an appeaser or a provocateur," he said.

"This is a tough, tough area to try to gain information," he said. "It's a challenge that's as tough or tougher than it's ever been. It has a pretty serious impact on our ability to make the correct decisions."

Russia seized Ukraine's Crimean Peninsula in 2014 and an ongoing conflict in eastern Ukraine between Kyiv and Russian-backed rebels in the region known as Donbas has left an estimated 14,000 dead. Now, Ukraine says an estimated 90,000 Russian troops have massed near the border.

The buildup could be a prelude to another Russian invasion. Speaking to Ukraine's foreign minister this month, Blinken said Putin's "playbook" was for Russia to build up forces near the border and then invade, "claiming falsely that it was provoked."

NATO Secretary-General Jens Stoltenberg said Friday that the alliance is seeing an "unusual concentration" of Russian forces along Ukraine's border, warning that the same type of forces was used by Moscow in the past to intervene in neighboring countries.

Though U.S. officials don't believe an invasion is imminent, Putin also has ramped up his dismissal of an independent Ukraine. A lengthy essay the Kremlin published in July asserts that Ukrainians and Russians are "one people" and the "true sovereignty of Ukraine is possible only in partnership with Russia."

But the moves could also be saber-rattling to prevent Ukraine from growing closer to the West or being admitted into the North Atlantic Treaty Organization, which Putin strongly opposes. It's not clear if Russia would risk invading Ukraine, setting off a far more difficult war, or want to occupy hostile territory.

A similar Russian military buildup in the spring did not lead to an invasion, though lawmakers and officials say they are more concerned now, citing U.S. intelligence that has not been made public.

Russia denies it has aggressive motives, insisting it is responding to increased NATO activity near its borders and the strengthening of Ukraine's military.

Speaking on Thursday, Putin said, "It should be taken into consideration that Western partners are exacerbating the situation by supplying lethal modern arms to Kyiv and carrying out provocative military maneuvers in the Black Sea — and not only in the Black Sea but also in other regions close to our borders."

The U.S. has sent ships into the Black Sea as part of NATO activity alongside Ukraine and in recent weeks has delivered military equipment as part of a $60 million package announced in September. Since 2014, the U.S. has committed to spending more than $2.5 billion to help Ukraine strengthen its defense.

The White House said it hopes to de-escalate tensions. "As we have made clear in the past, escalatory or aggressive actions by Russia would be of great concern to the United States," a spokesperson for the National Security Council said in a statement.

There has been a flurry of diplomacy in recent weeks. U.S. leaders have met with their Russian and Ukrainian counterparts, including a visit by CIA Director William Burns to Moscow during which he spoke to Putin by phone. Germany and France have issued a joint statement affirming support for Ukraine.

Ultimately, the U.S. has few good apparent options to stop Putin were he to press forward.

The Biden administration in April imposed new sanctions on Russia for what it said was Russia's role in the Ukraine conflict as well as allegations that it has abetted cyberattacks on U.S. infrastructure and interference in American elections.

Imposing more sanctions is unlikely to influence Putin's behavior, lawmakers and experts said. The Biden administration in May did waive sanctions related to the Nord Stream 2 pipeline, which will carry Russian natural gas directly to Germany, bypassing Ukraine.

A group of Republican lawmakers this month called on the U.S. to provide more lethal aid to Ukraine's military, ramp up intelligence sharing, or deploy a larger presence of its own to the Black Sea. But Russia could quickly counter with more forces.

And Putin could respond to any Western action by limiting energy exports to Europe, which is heavily dependent on Russian natural gas.

"The traditional tools that nation-states use to govern behavior of other nation-states are not available," said Douglas Wise, a former deputy director of the Defense Intelligence Agency. "The Russians have very little at risk."

Writing for the Carnegie Endowment for International Peace, two analysts said Putin may want to send a message to Washington that it must treat Russia "as a major power that cannot be marginalized on the U.S. agenda." But the analysts also described Ukraine as Putin's "unfinished business."

"That piece of unfinished business is the restoration of Russia's dominion over key parts of its historic empire," Eugene Rumer and Andrew Weiss wrote. "No item on that agenda is more important — or more pivotal — than the return of Ukraine to the fold."

Trying to seize more of Ukraine — or even pushing to Kyiv — would be much tougher than taking Crimea or parts of eastern Ukraine, said Paul Kolbe, a former CIA officer who leads the Intelligence Project at Harvard University's Belfer Center.

Putin can achieve many of his objectives without an invasion, Kolbe said, by putting pressure on Ukraine and NATO and driving a wedge between allies about how to respond.

"It's fitting in with a larger pattern of ensuring from their perception that they don't face threats on their close borders," he said.