Should National Guard troops be permitted to form unions? A new lawsuit asks a judge to say yes 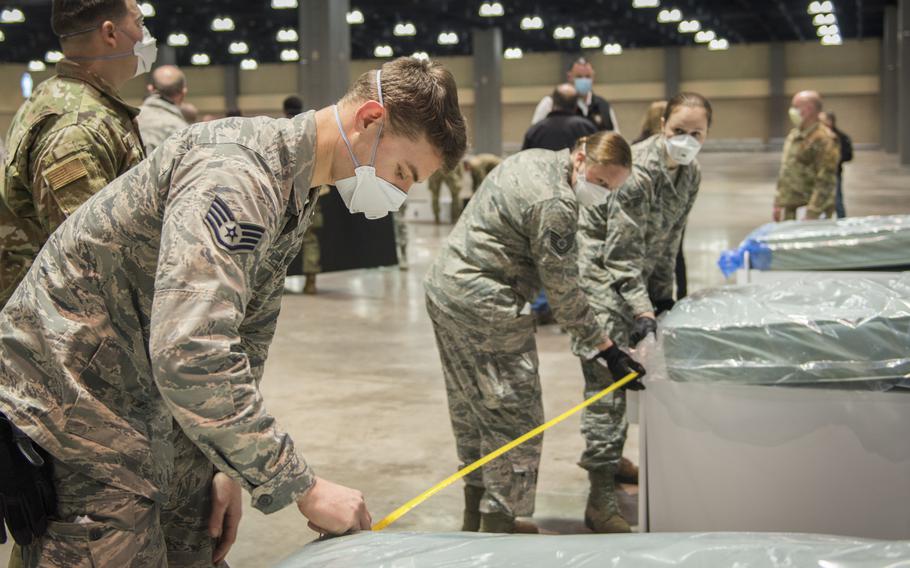 Staff Sgt. Sean Ofiara (left), 103rd Logistics Readiness Squadron, measures spacing between field hospital beds at the Connecticut Convention Center in Hartford on April 11, 2020. Soldiers and airmen from the Connecticut National Guard were setting up more than 600 beds at the site as potential hospital surge capacity for patients recovering from the coronavirus. (Steven Tucker/Air National Guard)

Four Connecticut labor unions filed a federal lawsuit this week asking a judge to rule that a law barring federal military troops from forming unions does not apply to National Guard troops working on state duty for governors.

The lawsuit filed Monday by the unions charges Guard troops should have the right to union representation in negotiations with state officials over working conditions while they are on state active-duty status. A 1978 federal law makes it a felony for military troops to join a union or even attempt to organize to negotiate with federal civilian officials.

But attorneys with the Yale Law School Veterans Legal Services Clinic, representing the unions in their lawsuit against U.S. Attorney General Merrick Garland and the Justice Department, argue the law as written only applies to members of the National Guard when they are activated on federal orders, such as when they deploy overseas or on domestic missions funded by the federal government. Guard members on state duty, they argue, should be able to organize much in the same way as the civilian state employees with whom they often work when activated by their governors.

“In Connecticut, the Guard is often activated under a chain of command that goes through the governor to respond to natural disasters in Connecticut, and they're working alongside state employees doing the same kind of work,” said Josh Britt, a Yale law student and intern with Veterans Legal Services Clinic working on the case. “They're just extra workers who are assigned to these missions, and so it makes a lot of sense for them to have some kind of organization representative to talk with the governor in the way that state unions already do for the state workers who are doing that work.”

It appears to be the first court challenge seeking union representation rights for National Guard members on state duty, said Britt, who is a Marine Corps veteran.

The lawyers did not consult Connecticut Guard members before filing the lawsuit, but Britt said some individuals who they consulted and who are familiar with the thinking of at least some Guard troops supported the lawsuit.

A spokesman for the Connecticut National Guard, Army Maj. David Pytlik, said the organization only became aware of the lawsuit on Monday when he was contacted by Stars and Stripes for a comment. He declined further comment but noted in an email that the Guard had no “bearing on the court’s interpretation of federal law.”

Spokespersons at the Pentagon and the National Guard Bureau also declined to comment.

While it was unclear Tuesday what appetite might exists for unions among National Guard troops, the unions that filed the lawsuit said they believe troops would benefit from representation. These include the American Federation of State, County and Municipal Employees Council 4, the Connecticut Police and Fire Union, the National Association of Government Employees Inc., and the CSEA Service Employees International Union Local 2001.

Jody Barr, the executive director of the AFSCME Council 4, cited the Connecticut Guard’s extensive work responding to the coronavirus pandemic during the last two years.

“Connecticut National Guard members on state orders have worked alongside the public service workers we represent to distribute protective equipment and assist with testing at the height of the … pandemic,” said Barr, who served in the Connecticut National Guard from 1996 to 2003. “Yet Guard members were not able to bargain over [coronavirus] safety precautions, even though the state employees they worked directly alongside were able to have a voice in … testing, shift safety, and other necessary precautions.”

Christopher Albani, who served in the Connecticut Air National Guard’s 103rd Civil Engineer Squadron from 2007 to 2018, said in a statement that Guard members are proud to serve their home states, but they “just wish we had the same opportunity to join together as do the civilian state employees alongside whom we work.”

The lawsuit alleges the “plain language” of the 1978 federal law — passed by Congress in response to an attempt by the American Federation of Government Employees to unionize the military in the wake of the Vietnam War — makes clear the ban on unionizing does not include National Guard members on state duty. However, the attorneys wrote, the stiff penalties for unionizing federal forces has long “chilled” unions from approaching National Guard members. Those found guilty of violating the law face up to five years imprisonment, and organizations found to have violated it face a fine of at least $25,000.

“If you are even just prosecuted under this law you still have to pay for defense,” Britt said. “And then, you know, being threatened with prison kind of scares the union's organizers and also Guard members. So the idea here is just to clear aside that fear, so that everyone can proceed in the fashion that they would if there wasn't fear of prosecution.”

“I applaud the legal team and state unions that are seeking clarification of law to extend the right to organize to our state's National Guard,” she said in a statement. “I have complete faith in the men and women serving our state, and believe that should they choose to unionize they would use these rights to better protect and serve all.”