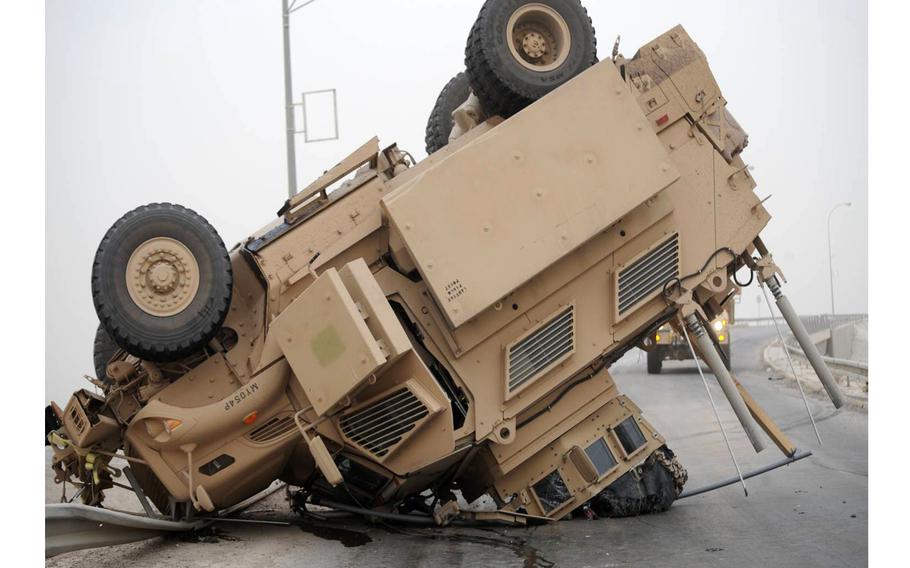 A Mine-Resistant Ambush-Protected vehicle rests on its turret and hood after a rollover. (Class Ron Burke/Department of Defense)

(Tribune News Service) — A pilot program to make the big, heavy military vehicles safer for Marines and soldiers to ride in was recently introduced in Congress; it is named for 1st Lt. Conor McDowell, who died when the vehicle he was in overturned during training at Camp Pendleton.

The program, if approved by lawmakers, would install data recorders in armored vehicles used for troop transport, reconnaissance and combat. The black boxes would record the driver’s movement and proficiency, as well as near-miss accidents and potential hazards the vehicles face.

All that information would be used to improve training standards, officials said. Examination of a high rate of non-combat training accidents involving tanks and trucks used by the Army and Marine Corps in recent years spurred the proposal.

“Ensuring the safety of the members of our armed forces must be a top priority — both at home or abroad,” Maryland Senator Van Hollen said in a statement. He’s one of the sponsors. “These provisions will improve Army and Marine Corps training safety to better protect our soldiers and Marines and prevent avoidable fatal accidents. I will continue working in the Senate to pass this common-sense legislation.”

The proposal, which has cleared the House of Representatives, requires the pilot program to be carried out within two years of enactment.

McDowell, the only child of Michael McDowell and Susan Flanigan and fiancee of Kathleen Isabel Bourque, died when the eight-wheeled amphibious armored reconnaissance vehicle he commanded rolled over in the Las Pulgas area of Camp Pendleton on May 9, 2019. Six other Marines suffered moderate injuries. McDowell, a platoon leader with the 1st Light Armored Battalion, saved the life of his gunner by pushing him down into the vehicle as it began to roll.

An investigation by the 1st Marine Division at Camp Pendleton found no human error in the accident but that dangerous terrain and an abundance of high grasses in the coastal canyons of the seaside training range made the area unsafe.

Since that day, McDowell’s parents and his fiancee have fought for safety reforms, especially for the highly armored, top-heavy military vehicles used. The family has lobbied Congress and helped push the House Armed Services Committee to commission the U.S. Government Accountability Office to do an independent study of increases in training accidents.

The GAO looked at the spike seen over the last decade — 124 people died in 3,753 non-combat accidents. Published in July, the report included the use of the data recorders among its recommendations.

While the legislation is still pending, Marine Corps officials said they won’t comment on the possible use of data recorders, but confirmed again that 1st Lt. McDowell did his job well and that as an organization they are focused on safety.

“First Lt. Conor McDowell was by all accounts an excellent Marine and teammate whose death continues to be felt by those who knew him,” said Capt. Andrew Wood, a Marine spokesman. “His family and friends continue to have our heartfelt condolences.”

Military experts have offered several reasons for the increase in training accidents, including stepped-up deployment schedules, older equipment and delayed maintenance because spare parts are scarce.

Retired Marine Col. Walt Yates, who worked on training safety programs before leaving the service in 2018, said he felt a focus on war fighting and modernization made getting traction on many of the programs difficult. “But in the long run,” he said, “if the force is injured and vehicles are damaged, we have a serious problem. It takes making safety a directive priority.”

He said he proposed a similar recording system to “gather data on driver skill and performance every time a Marine got behind the wheel” that could be use to monitor proficiency.

But the effort was never funded beyond a prototype, he said. “It is a mature technology that sits on the shelf waiting for the Department of Defense to adopt it,” he said, adding it could be a model used for the pilot program now proposed.

“They can use it to tell a driver to slow down or stop hitting the brakes hard,” Yates said of the proposed data recorders, “but the real value is collecting the data and analyzing which individual drivers and units have poor skills.”

Wood said the Marine Corp “is committed to ensuring safe, realistic training and to improving our processes.”

Yates and McDowell both believe recent media attention on military training — especially in the wake of an amphibious assault vehicle sinking during training off San Clemente Island in 2020 — helped get traction on the pilot program recommendation.

Only by holding military commanders accountable for those they lead will safety become a greater focus, they both said.

Yates gave a lot of the credit to McDowell, saying he has been exceptionally effective in drawing public awareness to safety issues.

“He stepped out of his own grief to realize you don’t correct this problem overnight — it’s the long game,” Yates said. “He’s trying to honor his son’s memory by protecting others in uniform.”