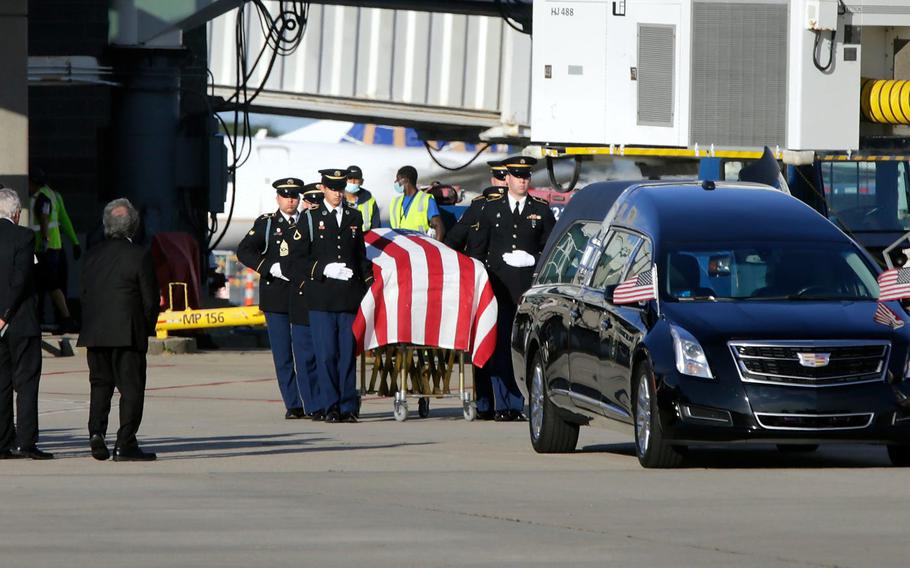 The remains of Army 1st Lt. Anthony Mazzulla, who was killed during the Korean War, are returned to Rhode Island on Tuesday, October 12, 2021. (Kris Craig, The Providence Journal/TNS)

PROVIDENCE, R.I. (Tribune News Service) — The remains of a former altar boy and Providence College student came home to Rhode Island on Tuesday, more than 70 years since he disappeared in one of the most consequential battles of the Korean War.

An airliner carried the remains of U.S. Army 1st Lt. Anthony R Mazzulla to Rhode Island T. F. Green International Airport late in the afternoon, nearly completing a path that first took them from North Korea to the United States and a DNA testing facility in Delaware.

A military honor guard and family members, including Mazzulla's 66-year-old niece, who was close to his mother, and a military honor guard received the remains on the tarmac. A motorcade then moved the soldier's flag-draped casket to the Nardolillo Funeral Home in Cranston, Rhode Island.

"I'm very proud to say he was my uncle and he served his country," said Mazzulla's niece, Lois Marandola, of Johnston. "He gave the ultimate sacrifice. I never really thought we would see this day." 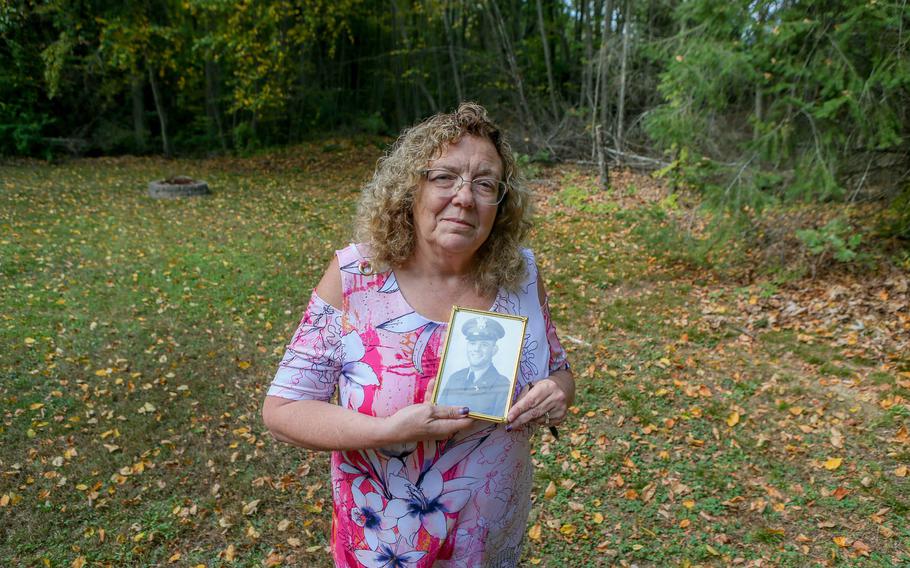 Mazulla served with the U.S. Army's 1st Battalion of the 32nd Infantry Regiment, 7th Infantry Division, in late 1950 — when waves of Communist Chinese troops poured from China into Korea, foiling U.S. plans for an decisive action to end the conflict.

The battalion was deployed deep into northern Korea as part of a task force that was nearly annihilated, according to a history compiled by the chief historian of the Army Historical Foundation, Matthew Seelinger.

About 3,200 U.S. soldiers and Marines and about 700 Republic of Korea soldiers made up the task force, says Seelinger's report.

Initially, the task force, operating in extreme cold, had the job of relieving U.S. Marines serving near a large reservoir. Led by U.S. Col. Allan D. "Mac" MacLean, the force also had the responsibility of protecting areas to the east of the Chosin Reservoir. Meanwhile, troops on the western side of the water would assault enemy supply lines to the west.

Mazzulla's battalion took positions farthest to the north on the eastern side. But on the night of Nov. 27, says the report, Chinese Communist Forces encircled units of the task force and attacked, "blowing bugles and screaming wildly," according to the report.

Mazzulla's battalion was hit first, it says, taking 100 casualties. Other U.S. infantry battalions to the south took heavy casualties as well. Enemy attacks and deep mud stymied a column of tanks that was sent north to help.

On Nov. 28, says the report, the commander of X Corps, Maj. General Edward M. Almond, flew into the battalion's perimeter, "seemingly unaware" of the crisis and announcing the task force's role in a pending U.S. attack, saying "Don't let a bunch of Chinese laundrymen stop you."

The Chinese forces struck again on Nov. 29 and the combat was "often hand to hand," says the report. As snow fell, Mazzulla's battalion moved south to join up with another battalion in anticipation of mounting the pending attack ordered by Almond.

They found that battalion under enemy fire. At one point, says the history. the task force commander, MacLean, confused certain enemy troops with friendly forces. MacLean himself was captured(and another American POW would later tell investigators that he died from his wounds four days into his captivity).

The commander of Mazzulla's battalion, Lt. Col. Don C. Faith, took over the hobbled task force, which, with almost 500 wounded, could not mount the attack ordered by Almond. Communications with U.S. Marines and the 7th Infantry Division's headquarters were severed.

Another enemy attack that night inflicted 100 more casualties, says the report. With orders to withdraw, the force rolled south encountering enemy roadblocks and drawing fire. During a fight at one of them, Faith was killed by grenade fragments, according to the history.

Some wounded soldiers were killed inside the motorized transports. Other troops left their trucks to dodge enemy fire or to attempt escape across the frozen reservoir. Many died from wounds or exposure, says the history. Others were captured.

In all, only about 1,000 members of the task force made it to U.S. Marine positions to the south, says the historical foundation's report.

In the immediate aftermath, it says, many critics felt that the demise of the task force was shameful. But since then historians have agreed that the task force blocked the Chinese drive on the eastern side of the reservoir over a period of five days, which allowed the withdrawal of U.S. Marines on the reservoir's west side. The task force was awarded a Presidential Unit Citation in September 1999. 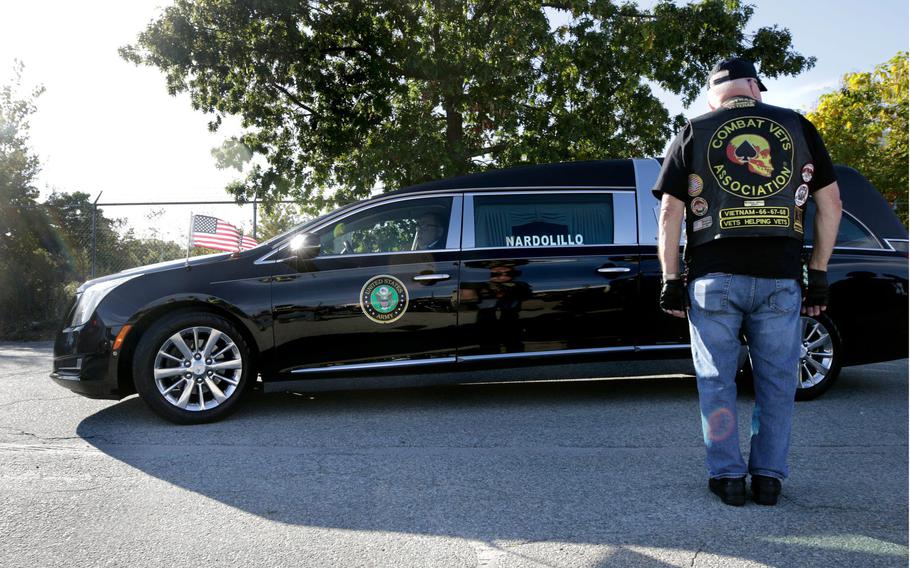 Members of the Patriot Guard Riders and RI state chapter of the Legion Riders were on hand as the hearse carrying the remains of U.S. Army 1st Lt. Anthony R Mazzulla entered the airfield through a service entrance. The remains of a former altar boy and Providence College student came home to Rhode Island on Tuesday, more than 70 years since he disappeared in one of the most consequential battles of the Korean War. (Kris Craig, The Providence Journal/TNS)

Neither Mazzulla's niece, Marandola, nor Mabel Langlais, a casualty assistance officer for the Rhode Island Army National Guard, were able to specify the circumstances of Mazzulla's death.

The 26-year-old was listed missing on Dec. 2, 1950. The return of his remains to the U.S. was an offshoot of diplomacy between former President Donald Trump and North Korea Leader Kim Jong-un.

He was lost and then he was found, says Paul K. Kim, the national chaplain of the Korean War Veterans Association, who sees a spiritual metaphor.

When Mazzulla is remembered Saturday prior to his burial in St. Ann's Cemetery, a wreath from the association will be on hand, adorned with a message.

"Rest in eternal peace, brother," it says. "You were not forgotten."