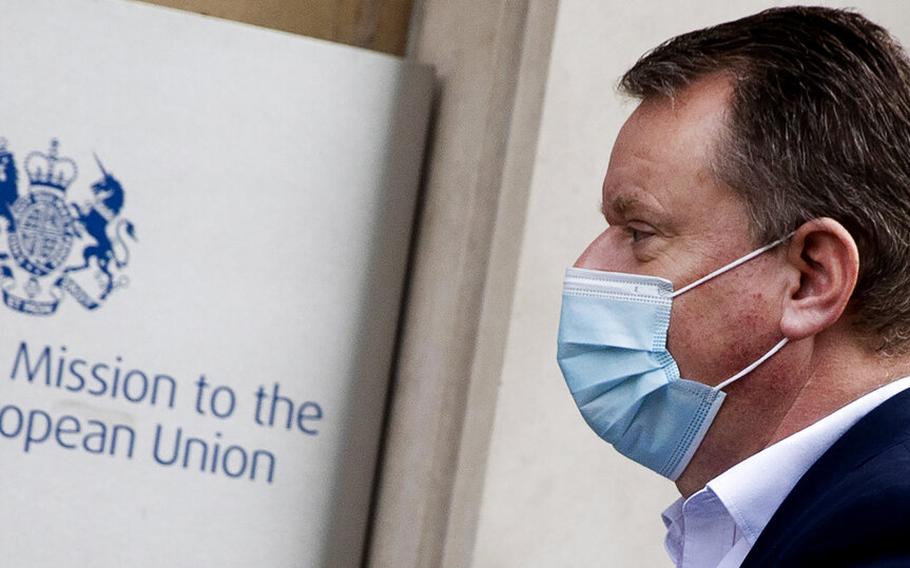 In this Saturday, Dec. 19, 2020 file photo, Britain’s chief negotiator David Frost arrives at the UK delegation office for Brexit talks in Brussels. It was late on Christmas Eve last year when the European Union and Britain finally clinched a Brexit trade deal after years of wrangling, threats and missed deadlines to seal their divorce.There was hope that now-separated Britain and the 27-nation bloc would sail their relationship toward calmer waters. Don’t even think about it. Such was the bile and bad blood stirred up by the diplomatic brinkmanship and bitter divorce that, two months from another Christmas, insults of treachery and duplicitousness are flying again. (Virginia Mayo/AP)

BRUSSELS — It was late last Christmas Eve when the European Union and Britain finally clinched a Brexit trade deal after years of wrangling, threats and missed deadlines to seal their divorce.

There was hope that now-separated Britain and the 27-nation bloc would sail their relationship toward calmer waters.

With Christmas closing in again one thing is clear — it wasn’t to be.

Britain’s Brexit minister on Tuesday accused the EU of wishing failure on its former member and of badmouthing the U.K. as a country that can’t be trusted.

David Frost said during a speech in Lisbon that the EU “doesn’t always look like it wants us to succeed” or “get back to constructive working together.”

He said a fundamental rewrite of the mutually agreed divorce deal was the only way to fix the exes’ “fractious relationship.” And he warned that Britain could push an emergency override button on the deal if it didn’t get its way.

“We constantly face generalized accusations that we can’t be trusted and that we aren’t a reasonable international actor,” Frost added — a response to EU claims that the U.K. is seeking to renege on the legally binding treaty that it negotiated and signed.

That means customs and border checks must be conducted on some goods going to Northern Ireland from the rest of the U.K., despite the fact they are part of the same country.

The regulations are intended to prevent goods from Britain entering the EU’s tariff-free single market while keeping an open border on the island of Ireland — a key pillar of Northern Ireland’s peace process.

The U.K. government soon complained the arrangements weren’t working. It said the rules and restrictions impose burdensome red tape on businesses. Never short of a belligerent metaphor, 2021 has already brought a “sausage war,” with Britain asking the EU to drop a ban on processed British meat products such as sausages entering Northern Ireland.

The bloc has agreed to look at changes to the Protocol, and is due to present proposals on Wednesday. Before that move, Britain raised the stakes again, with Frost demanding sweeping changes to the way the agreement is governed.

In a speech in the Portuguese capital, Frost said the Protocol “is not working.”

“It has completely lost consent in one community in Northern Ireland,” he said. “It is not doing the thing it was set up to do – protect the Belfast (Good Friday) Agreement. In fact it is doing the opposite. It has to change.”

Most contentiously, he said the EU must also remove the European Court of Justice as the ultimate arbiter of disputes concerning trade in Northern Ireland and instead agree to international arbitration.

He said the role of the EU court “means the EU can make laws which apply in Northern Ireland without any kind of democratic scrutiny or discussion.”

The EU is highly unlikely to agree to the U.K. demand. The bloc’s highest court is seen as the pinnacle of the free trade single market, and Brussels has vowed not to undermine its own order.

Ireland’s Europe minister, Thomas Byrne, said the bloc’s members would “stay completely calm, we stay unified, but we stay firm in our objectives.”

He said the EU would try to make the trade arrangements work better, but dismissed the issue of the European court’s role as “completely theoretical.”

“It has no practical application and has not been raised by anybody,” he said.

If the U.K. went through with Frost’s threat to invoke Article 16, a clause allowing either side to suspend the agreement in exceptional circumstances, it would send already testy relations into a deep chill and could lead to a trade war between Britain and the bloc — one that would hurt the U.K. economy more than its much larger neighbor.

The economically minute but symbolically charged subject of fish, which held up a trade deal to the final minute last year, is also stoking division now.

This week France was rallying its EU partners for a joint stance and action if necessary if London wouldn’t grant more licenses for small French fishing boats to roam close to the U.K. crown dependencies of Jersey and Guernsey that hug France’s Normandy coast.

“We see in the clearest way possible that Great Britain does not respect its own signature,” he said.

In a relationship where both sides often fall back on cliches about the other, Castex was harking back to the centuries-old French insult of “Perfidious Albion,” a nation that can never be trusted.

Across the English Channel, U.K. Brexit supporters often depict a conniving EU, hurt by Britain’s departure, doing its utmost to make Brexit less than a success by throwing up bureaucratic impediments.

“The EU and we have got into a low equilibrium, (a) somewhat fractious relationship,” Frost conceded. He said it “need not always be like that, but ... it takes two to fix it.”