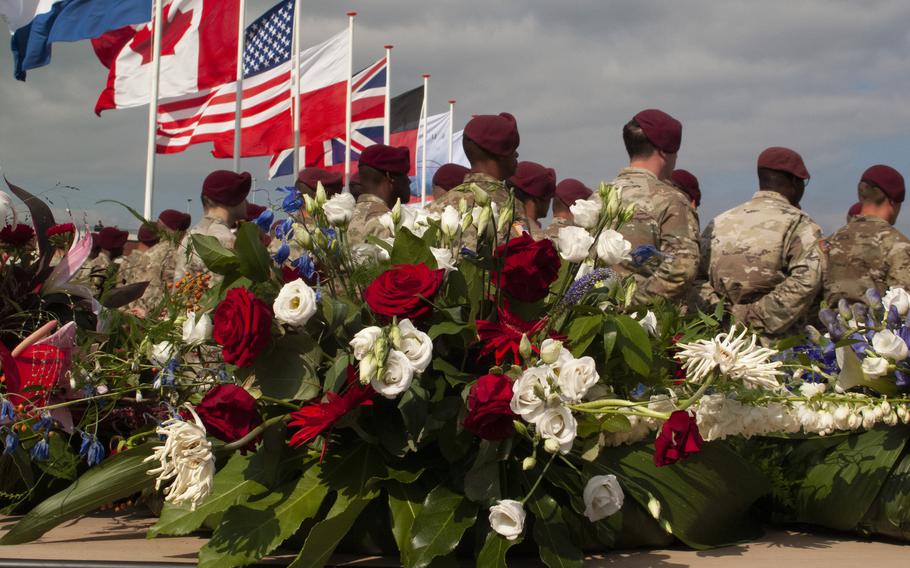 Buy Photo
Members of the 82nd Airborne Division stand in front of a wreath during a ceremony on Sept. 20, 2021, in Nijmegen, Netherlands, to remember the 48 U.S. soldiers who died crossing the Waal River 77 years ago during Operation Market Garden in World War II. (Karin Zeitvogel/Stars and Stripes)

NIJMEGEN, Netherlands — American soldiers paid tribute this week to the 48 paratroopers from the 82nd Airborne Division who died crossing the Waal River during Operation Market Garden in 1944.

“They gave their lives for the freedom of a land far from home. We know their actions will never be forgotten,” Col. Phil Kiniery, commander of the 2nd Brigade, 82nd Airborne Division, said in a speech at the ceremony held on a sandy riverbank in the Netherlands’ oldest city.

Schoolchildren reenacted the historic crossing in a dance, and Dutch and American officials laid wreaths at a stone memorial to the paratroopers who died on Sept. 20, 1944. 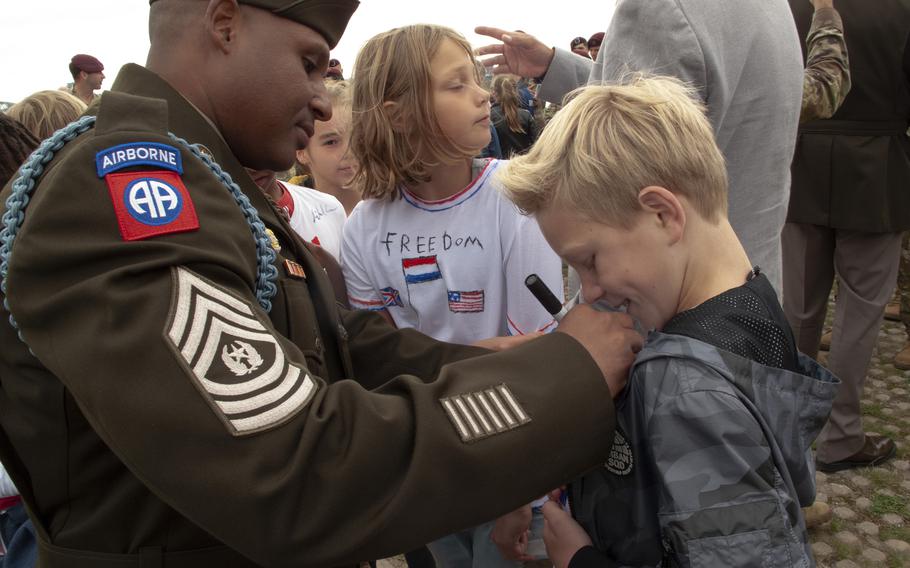 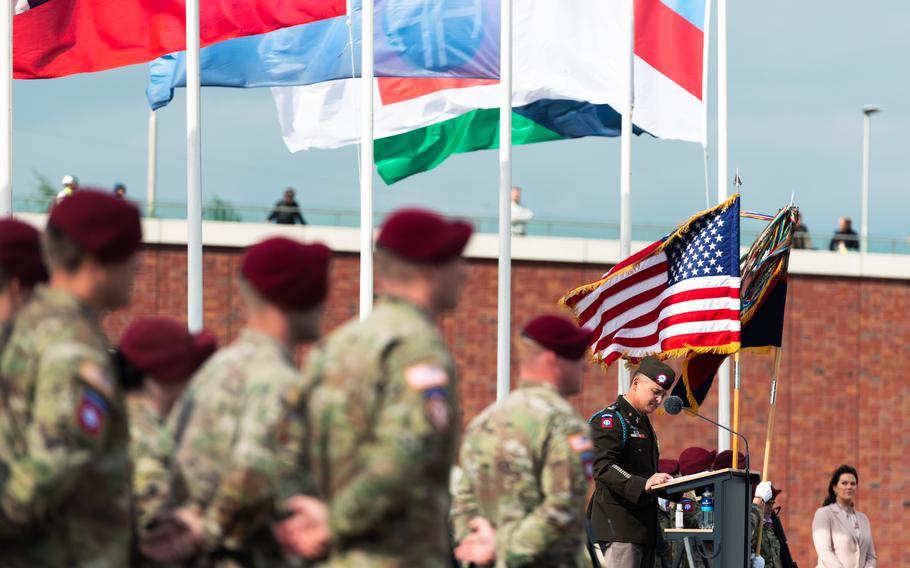 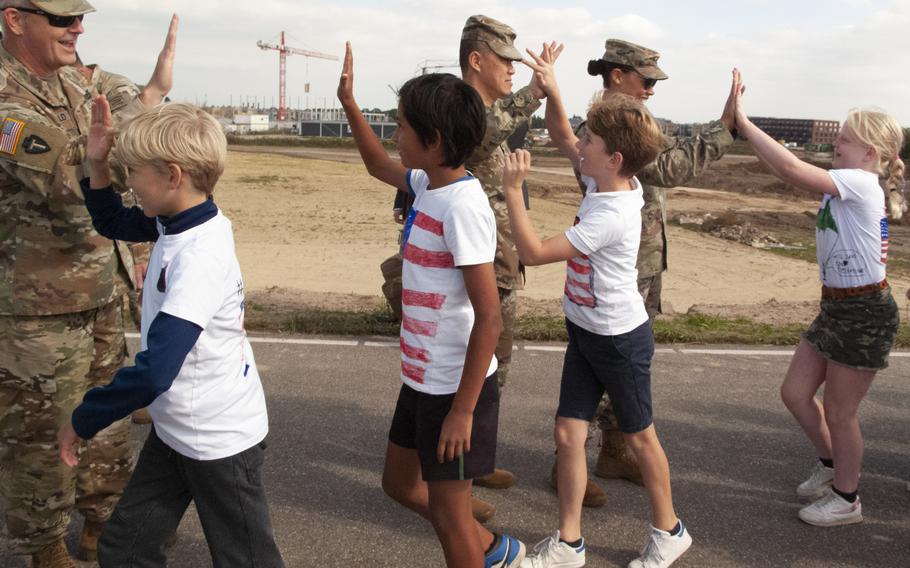 Buy Photo
From left to right, Maj. Mark Fitzgerald, Capt. Bau Phan and Lt. Col. Kimberly Baird of the Texas National Guard high-five Dutch children as they arrive to take part in a ceremony in Nijmegen, Netherlands, on Sept. 20, 2021, to remember the crossing of the Waal River by U.S. soldiers 77 years earlier. (Karin Zeitvogel/Stars and Stripes)

“The Dutch understand the importance of this because they grow up with this history,” Kiniery told Stars and Stripes. “What I have to make sure of as a commander is that the paratroopers understand what the 82nd Airborne Division did here — the Waal River crossing is one of the 82nd Airborne Division’s most historic moments. It’s a legacy that transcends friendship.”

Several of the soldiers at the ceremony attended by about 200 people said they were unaware of the significance of the crossing, which was featured in the movie “A Bridge Too Far.”

The Waal River crossing came three days after members of the 82nd Airborne Division had jumped on landing zones in villages south of Nijmegen, at the start of Operation Market Garden. Their mission was to take several bridges from the Germans, including two over the Waal at Nijmegen. 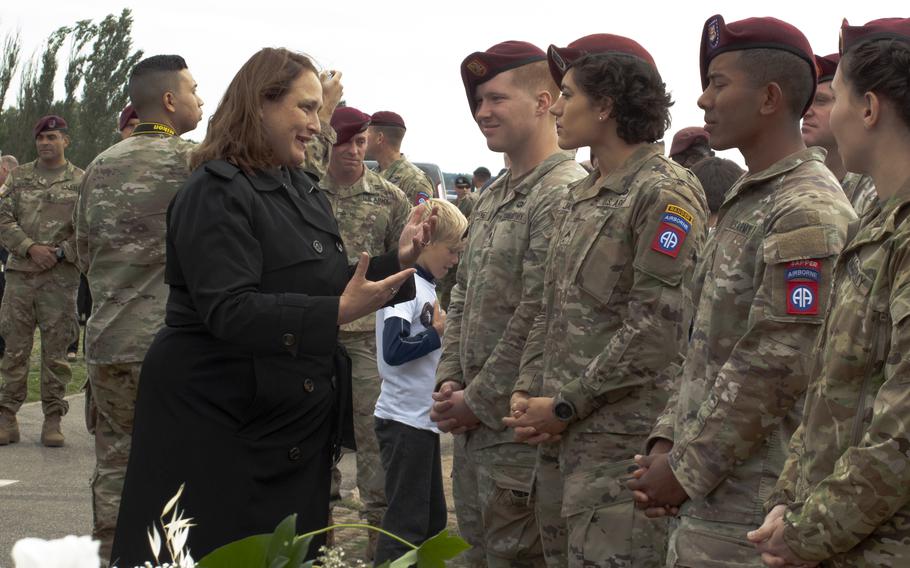 Buy Photo
Maj. Mark Fitzgerald of the Texas National Guard high-fives a Dutch girl as she and her classmates from De Oversteek school arrive on Sept. 20, 2021, for a ceremony to mark the 77th anniversary of the crossing the Waal River in Nijmegen, Netherlands, during Operation Market Garden in World War II. (Karin Zeitvogel/Stars and Stripes)

After days of fighting against unexpectedly strong resistance by German forces, division commander Brig. Gen. James Gavin devised a plan to cross the river in small boats and attack one of the bridges from two sides.

“Twenty-six boats made of canvas and wood started the crossing in the light of day under enemy fire,” Kiniery said.

Most of the paratroopers used the buttstocks of their rifles to paddle the rickety boats, and as the smokescreen that was supposed to shield them was blown away by the wind, they became sitting ducks for enemy fire. Only 11 of the 26 boats made it to the north bank of the Waal.

Dutch children still learn about the crossing in school, and the 48 paratroopers who died are remembered in a nightly march by military veterans across the Oversteek bridge, where 48 pairs of lights turn on one after the other as the sun goes down. The name of the bridge itself — Oversteek means ‘crossing’ — is a tribute to the soldiers.