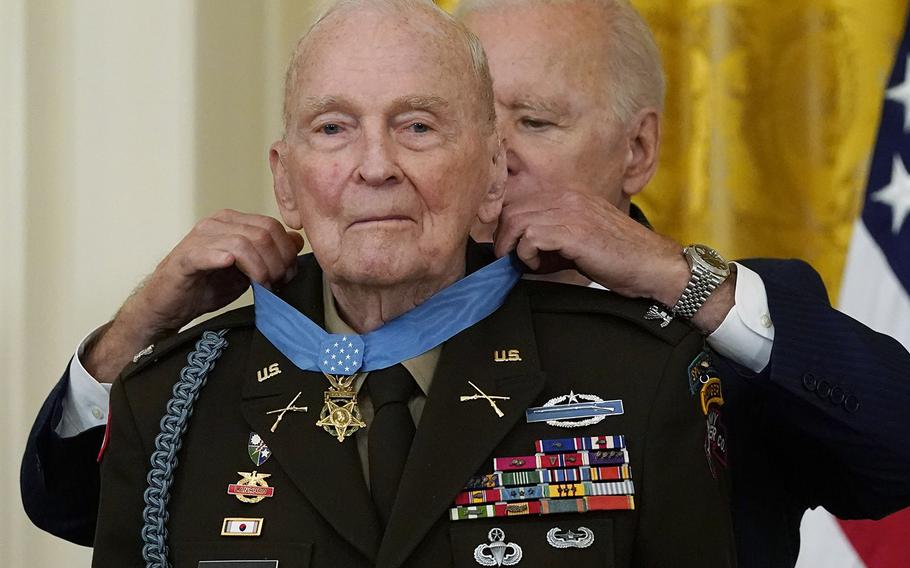 WASHINGTON – President Joe Biden and President Moon Jae-in of South Korea commended the actions Friday of Col. Ralph Puckett Jr., a Korean War veteran who was awarded the Medal of Honor in a ceremony at the White House.

Before awarding Puckett the medal Friday, Biden described him as “true American hero” for whom the recognition was long overdue.

“Korea is sometimes called the forgotten war, but those men who were there under then-lieutenant Puckett’s command never forgot his bravery,” Biden said. “They never forgot he was right by their side every minute of it.”

Puckett, 94, earned the medal for actions he took more than 70 years ago, in November 1950. As a young first lieutenant in the Korean War, Puckett commanded the Eighth Army Ranger Company during a mission to seize “Hill 205” and defend it against a series of assaults by the Chinese. He risked his life multiple times to draw enemy fire, call for artillery strikes, check the perimeter and deliver ammunition to his soldiers.

He was wounded three times during the attack by a hand grenade and mortar rounds. Two of his soldiers carried him off the hill as the company evacuated, despite Puckett’s orders for them to leave him behind.

Moon, who visited Washington this week to show the strength of the alliance between the two countries, thanked Puckett and all American veterans who fought in the Korean War for helping bring about democracy in South Korea.

“Earlier, Col. Puckett told me that when he was in Korea, it was absolutely destroyed. That was true,” Moon said. “But from the ashes of the Korean War, we rose. We came back, and that was thanks to the Korean War veterans who fought for Korea’s peace and freedom.”

Biden and Moon said they believed the event marked the first time a foreign leader had ever attended a Medal of Honor ceremony. As Moon approached Puckett to shake his hand, Puckett embraced the South Korean leader in a hug.

Puckett was brought into the East Room of the White House in a wheelchair, but as he stood to receive the Medal of Honor, he pushed aside the walker that was set in front of him. After the medal was placed around his neck, Biden welcomed Puckett’s family to the stage, as well as Master Sgt. Merle Simpson, a Ranger who had served under Puckett in the battle of Hill 205. 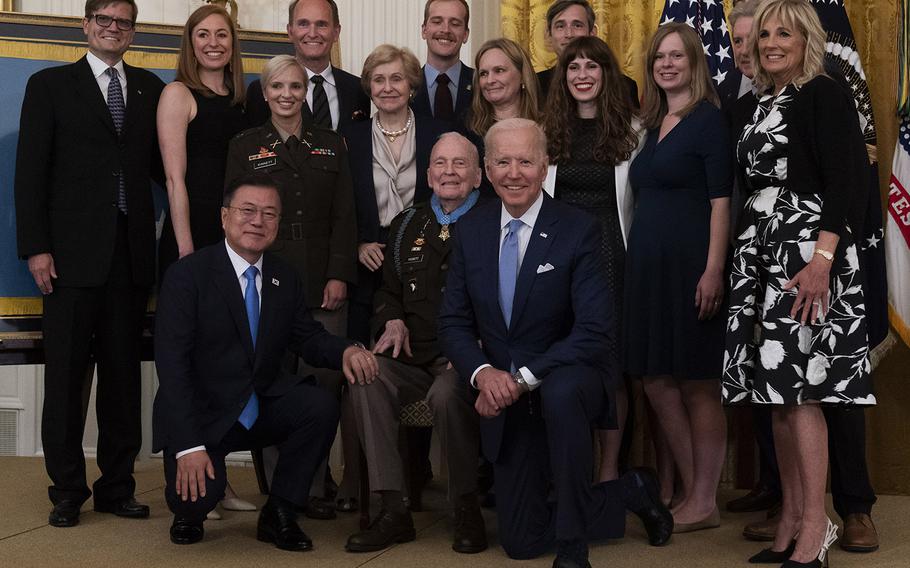 President Joe Biden takes a knee for a group photo with South Korean President Moon Jae-in, kneeling left, after presenting the Medal of Honor to U.S. Army Col. Ralph Puckett, center, in the East Room of the White House, Friday, May 21, 2021. (Alex Brandon/AP)

“I understand that your first response to us hosting this event was to ask, ‘Why all the fuss? Can’t they just mail it to me?’” Biden said. “Col. Puckett, your lifetime of service to our nation deserves a little bit of fuss.”

Locke came across information about the battle of Hill 205 while writing a book about the history of the Army Rangers. Locke believed that the number of times Puckett risked his life during the battle should’ve earned him the country’s highest military honor.

With the assistance of Sen. John McCain, R-Ariz., Locke succeeded in the pursuit after 18 years of appealing to Army boards. Puckett’s son, Thomas, said his dad was often reluctant throughout the years about whether to keep pursuing the medal.

“There was definitely resistance on my dad’s part,” Thomas Puckett said. “He’s extremely modest. He was only convinced to continue by the fact that it wasn’t just for him, it was for his men. He said, ‘Well, in that case let’s keep trying.’”

When speaking to reporters Thursday, Puckett credited his soldiers for earning the medal.

Puckett’s wife, Jean Martin, as well as their son, daughter and six grandchildren, attended the ceremony at the White House on Friday. Locke had kept the family updated over the past 18 years about his efforts to secure Puckett the Medal of Honor. During that time, they all hoped it would be decided while Puckett was still living.

“My mom kept saying, ‘I just want to get him there and have him feel that medal around his neck,’” said his daughter, Martha Puckett Wilcoxon. “We were concerned due to his age and health that it might not happen soon enough.”

On Thursday, Wilcoxon said she expected to be emotional at the ceremony, especially seeing her mother and father there together. The couple met just weeks after the battle of Hill 205 when Martin, a high school senior at the time, accompanied a friend to visit Puckett in the hospital at Fort Benning in Georgia. They were married exactly two years after the battle.

The ceremony Friday marked what Wilcoxon described as one of the “final chapters of their military love life.”

“I’ve watched my mother nurse my father back to health quite a few times,” Wilcoxson said. “I’ve seen her helping him get ready for this whole thing, and I think it’s very touching that they can share this together. It’s just a beautiful story.”

Puckett served in the Army for 22 years, including combat service in the Vietnam War. He retired in 1971 but continued to volunteer as a speaker and mentor to countless Rangers throughout the decades. Puckett and his wife live in Columbus, Ga., near Fort Benning, and he still attends nearly every Ranger graduation and other Army events.