'I don’t know if discipline is something you can teach' 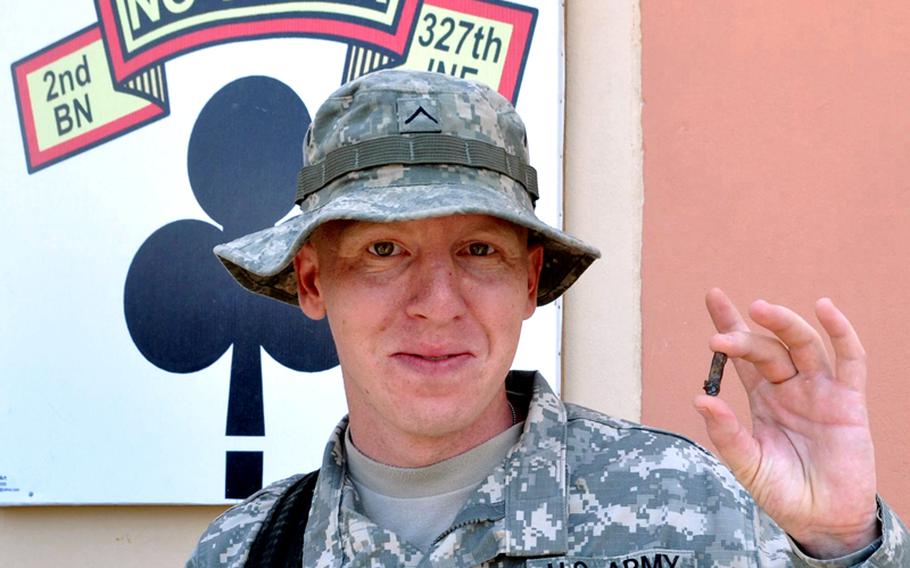 Pvt. Jeremy Impiccini shows the bullet that lodged in his magazine pouch during a big offensive in the Ghaki Valley in Kunar province in June. (Dianna Cahn/Stars and Stripes)

Pvt. Jeremy Impiccini shows the bullet that lodged in his magazine pouch during a big offensive in the Ghaki Valley in Kunar province in June. (Dianna Cahn/Stars and Stripes) 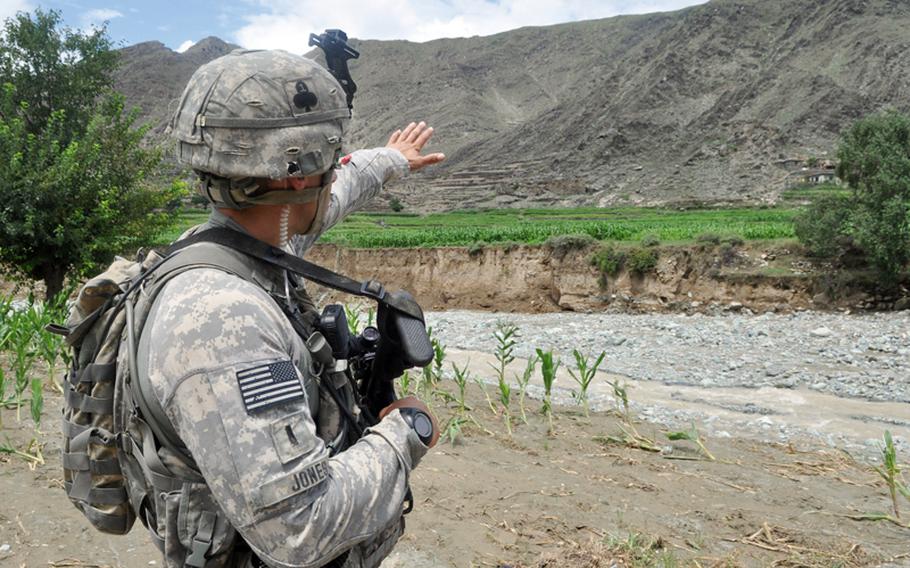 First Lt. Doug Jones points across Ghaki Valley Road in Kunar province on Aug. 9 to where he and his comrades were hit with a friendly bomb during a battle to rout insurgents on June 27. (Dianna Cahn/Stars and Stripes)

(Day two of a three-day serial)

The story so far: After months of watching insurgents mass in the Ghaki Valley, the 2nd Battalion, 327th Infantry Regiment launched Operation Strong Eagle on June 27 to take the village of Daridam. Under cover of night, units dropped onto mountains as the main element staged at the valley&rsquo;s entrance. They immediately encountered devastating fire. As the Americans evacuated the dead and wounded and prepared to advance, the Afghan army soldiers retreated.

SANGAM, Afghanistan -- The Ghaki Valley was on fire. Bullets, rocket-propelled grenades, mortars, bombs, artillery. All battered the valley floor, its steep mountain walls &mdash; and the men trapped within them.

Capt. Steven Weber&rsquo;s Headquarters and Headquarters Company inched up the narrow road, trying to maintain forward motion despite significant obstacles. His support units on the high ground were all in heavy fights and his front line road element was down to 14 men from the original 76, after two of his soldiers were shot &mdash; one fatally &mdash; and his Afghan National Army partners retreated.

&ldquo;I was pretty mad about it,&rdquo; said Pfc. Adam Schwichtenberg, 20, who was experiencing his first firefight.

His squad leader, Staff Sgt. Eric Shaw, had just been killed and the men were reeling. They&rsquo;d been walking up the same road and taking the same fire as the Afghan soldiers.

&ldquo;It&rsquo;s a discipline issue,&rdquo; Schwichtenberg said of the ANA. &ldquo;I don&rsquo;t know if discipline is something you can teach.&rdquo;

The fighting had been going on for hours on June 27, pinning down the men of the 2nd Battalion, 327th Infantry Regiment, 101st Airborne Division at a bend in the road near the start of their eastern advance on the insurgent-controlled village of Daridam.

They were dehydrated and exhausted. Route-clearance vehicles at the fore of the advance were hobbled and had to be pushed off the road.

Insurgents had massed along the Ghaki Valley in heavily fortified positions, enabling them to pummel the advancing forces. They had command of the best ridges, held their ground and absorbed their casualties stoically.

It was an eye-opener for the Americans who, no matter their superior training and valiant fighting, suddenly found themselves up against an able and equally determined enemy.

Afghan fighters had scrambled through these steep, rocky mazes for years. Their familiarity with the punishing terrain gave the insurgents a distinct and at times overwhelming advantage. It quickly became apparent to the American warriors why divisions of Russian soldiers had been defeated in this eastern mountain region of Afghanistan and why, more recently, U.S. troops withdrew from embattled outposts in Wanat, Keating and Korengal after enduring fierce, close fights.

The Taliban&rsquo;s &ldquo;will and his drive to try to overrun us or keep us from maneuvering was something I&rsquo;d never seen before,&rdquo; said Sgt. 1st Class Gabriel Monreal, 32, a platoon sergeant from Corpus Christi, Texas. &ldquo;I&rsquo;ve never taken the enemy for granted. But the training these guys had, it was definitely a wake-up call.&rdquo;

American units who had dropped onto surrounding peaks were under intense fire. All were taking serious casualties, and on a mountain ridge south of Weber&rsquo;s position Company B had lost one of their own, Sgt. David Thomas, in a hail of gunfire. Company B was fighting insurgent infiltration from the rear, while east of them, closer to the road, the scouts were on a ridge overlooking Daridam and the road. They were fully surrounded and fighting with everything they had, soldiers recalled.

Hoping to refocus some fire away from the scouts, Weber ordered his platoons to advance: First Lt. Stephen Tangen, leader of 1st Platoon, jumped into the lead vehicle and advanced up the road, while 2nd Platoon, under 1st Lt. Doug Jones, made a parallel push along the north ridge line.

Tangen&rsquo;s truck, an all-terrain bomb-resistant vehicle known as an M-ATV, moved several hundred yards forward, reaching the far outskirts of Daridam. From a walled compound above, halfway up a terraced mountainside and set back behind a fruit orchard, insurgents pounded the road with all means of fire.

RPGs rained down, exploding all around Tangen&rsquo;s truck, stopping it in its tracks, the men recalled. Three grenades hit one after the other. One landed in the engine bed, but didn&rsquo;t explode. Machine-gun rounds were cracking the windows. Then two more grenades struck.

Smoke started pouring in through the vents and in the suffocating heat, the men were forced to turn off the engine.

Inside, Pfc. Thomas Shelton, 24, of Dallas, struggled to keep the automated machine gun firing once they lost engine power.

Explosions rocked the truck. It was so hot, Shelton recalled, he could barely breathe.

Tangen was on the radio screaming for backup. A second truck pulled up behind them and it, too, was soon disabled. The men wondered how they could ever get out of this alive.

Up on the ridge lines, where soldiers had climbed up to overwatch positions, men looked on helplessly as the battle unfolded below them, too far away to effectively fire.

Across the road on the other ridge, Jones had divided his platoon into two groups to engage several enemy positions. One group took shelter in a small compound a few hundred yards from where the insurgents were dug in. The other group took position behind a wall in the roofless ruins of an old building about 50 yards away.

As fire rained down the vehicles, Jones&rsquo; men battled on the ridge, several men surviving by a hair&rsquo;s breadth. Pvt. Jeremy Impiccini, 26, of Phoenix, had a bullet come straight for him, but it hit the magazine casing in his bullet pouch instead.

&ldquo;We were crossing one of the terraces and Impiccini said &lsquo;Sergeant, I think I got shot!&rsquo; &rdquo; recalled Sgt. Cole McClain, 22, a squad leader from Fairbank, Iowa. &ldquo;But we were good.&rdquo;

With all his men in heavy contact, Weber was commanding from the rear, working to relay positions to the air assets so they could bomb the enemy positions.

On the ridge, Staff Sgt. Matthew Loheide heard the call for men to take cover ahead of the bombing. Loheide, of Long Island, N.Y., was more concerned with the men on the road below. &ldquo;We thought the bomb was going to hit 200 [yards] away [from us],&rdquo; Loheide said.

But something went terribly wrong.

Instead of striking the insurgents, the bomb fell on Loheide&rsquo;s position in the roofless ruins. The other half of 2nd Platoon watched in horror as a bomb landed near their brothers.

The wall collapsed into a pile of rocks. As the smoke rose, none of the 15 men in that position was visible. Their platoon mates ran over to dig them out, pulling them from the rubble one by one.

One suffered a punctured lung. Four others had concussions severe enough to require evacuation. Jones and his men made two trips down the mountain under heavy fire to evacuate the wounded.

They were all rattled and dazed. Miraculously, not a single man had been killed.