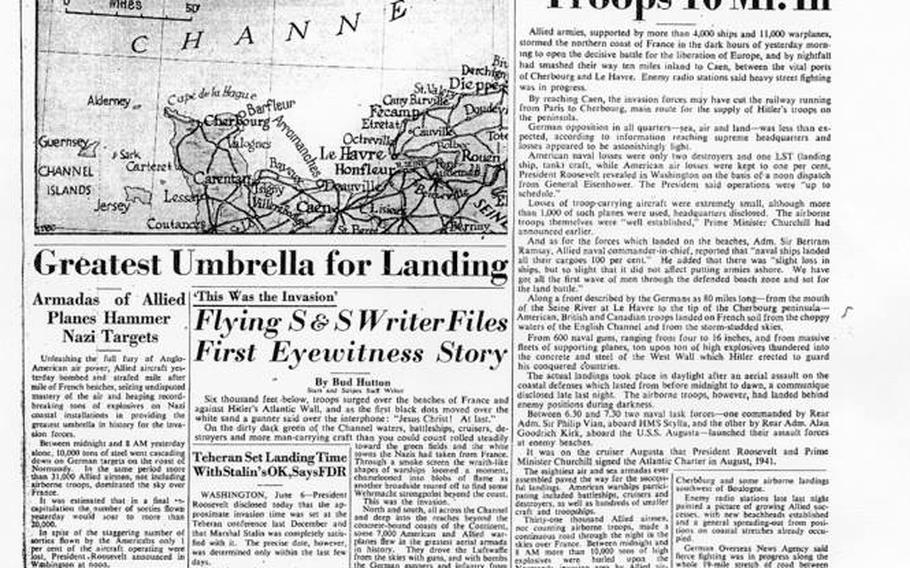 Six thousand feet below, troops surged over the beaches of France and against Hitler's Atlantic Wall, and as the first black dots moved over the white sand a gunner said over the interphone: "Jesus Christ! At last."

On the dirty dark green of the Channel waters. battleships, cruisers, destroyers and more mann-carrying craft than you could count rolled steadily toward the green fields and the white towns the Nazis had taken from France. Through a smoke screen the wraith-like shapes of warships loomed a moment, chameleoned into blobs of flame as another broadside roared off to find some Wehrmacht strongpoint beyond the coast.

This was the invasion.

North and south, all across the Channel and deep into the reaches beyond the concrete-bound coasts of the Continent, some 7,000 American and Allied warplanes flew in the greatest aerial armada in history. They drove the Luftwaffe from the skies with guns. and with bombs the German gunners and infantry from their camouflaged strongpoints beneath. Marauders and Havocs. Fortresses and Liberators. Mustangs, Thunderbolts, Lightnings and and all the myriad craft of the RAF filled the sky until there was no room for more.

From a Marauder medium bomber of Col. Wilson R. Wood's Ninth Air Force group, piloted by 1/Lt. Richard E. Robinson, of Pittsfield, Ill., I saw the first Americans go ashore. Just as they went into the low surf, our ship and with it thousands of other bombers and fighters carried out the job toward which Eighth and Ninth Air Force airmen have been aiming since the first Fortress opened its bomb bays above Rouen on Aug. 17, 1942. We poured onto every known German strongpoint in the Cherbourg peninsula area in front of the assault craft the heaviest concentrated bombing any spot in the world ever got.

Fountains of smoke and flame and Nazi-poured concrete leaped up along the ridges behind the beaches.

The airmen had been told that on them would rest the task of making the foot soldier's job less bloody. They accepted that task and in its execution bombed from half the altitude they knew could give them a fighting chance of getting home so that their explosives would not miss. To do that job they had gone through a nightmare of flak before they came to the targets.

For long months. the bombers and the fighters have woven a pattern of craters across the ramparts of the Atlantic Wall. The pattern was cut for invasion. On Monday. I flew in the co-pilot's spot of a Marauder piloted by Maj. Paul Stach of Rosenberg. Tex., to watch the last attack of the many which had come to be called "the pre-invasion blitz."

The bomber men went back to base. They ate and went to bed. At one o'clock in the morning they were called. Sleepy, worn with the strain of two hauls a day almost every day for two months, they walked through the wet night to the briefing. In a plain, undramatic Texas voice, Wilson Wood told them:

"Thirty-three seconds after your bombs hit the target. hundreds of thousands of American boys just as you are gain ashore in France. This is the invasion." He talked some more and ended: "Let's kick the hell out of everything Nazi that's left."

Then they cheered, and went out to work.

The clouds broke over the Channel, and suddenly there were more ships than you could see, with the white wakes of them streaming back to the English coast and the dark green of the Channel flat before them to the coast of Europe.

The flak began to come up, but for once the bomber men weren't watching it, because through the murk above the waters off the coast there burst the angry red of warship broadsides. and inland came the answering crimson a few moments later as the shells hit home.

At half the height they've used for bombing, the Marauders swept in.

The heavy flak burst around the formations, and tracer from machine guns streaked up past the wings; that's how low they flew.

We went away from the flak and began the long journey home and talked too much over the interphone. because this had been the day.