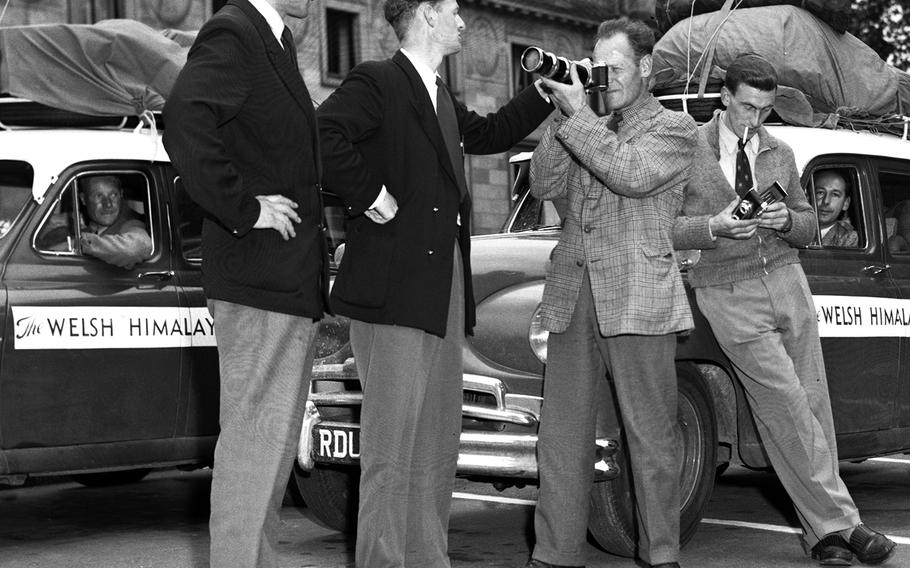 Bob Myers ©Stars and StripesWiesbaden, West Germany, July, 1955: The six members of a Welsh expedition to the Himalayas stop in Wiesbaden to pick up camera gear. Standing, from left to right, are John Harrop, Sydney Wignall, John Henson and Geoffrey Roberts. Seated in the car at left is Humfrey Berkeley, and in the car at right is Scotty Dwyer. The journey to climb 24,062-foot Nalkankart Peak turned into something more even complicated as Wignall, Harrop and a Nepalese liaison officer were captured and imprisoned by the Chinese as “Western Fascist Lackey Imperialist Running Dogs of the American CIA.” According to Wignall's 2012 obituary in The Telegraph, they were "held for two months in solitary confinement in freezing rat-infested cells on starvation rations. Although subjected to beatings, psychological torture and games of 'Chinese Roulette' (mock executions), they refused to sign confessions and steadfastly denied charges of spying" — which, as it turns out, was exactly what they were doing, not for the CIA but for India. "I avoided thinking of myself as a spy, although that in fact is what I was," said Wignall, who told his story in a 1996 book, "Spy on the Roof of the World."

RELATED MATERIAL:Stars and Stripes' 1955 story about the expedition's stop in Wiesbaden.Sydney Wignall's 2012 obituary in The Telegraph.