Ten years after the 9/11 attacks, Americans were reasonably positive about the state of their rights and liberties. Today, after 20 years, not as much.

That's according to a poll by The Associated Press-NORC Center for Public Affairs Research that builds on work conducted in 2011, one decade after the pivotal moment in U.S. history. Some questions were also asked on polls conducted in 2013 and 2015.

Americans were relatively united around the idea that the government did a good job protecting many basic rights a decade after the terrorist attacks, which produced a massive overhaul of the country's intelligence services and the creation of agencies such as the Department of Homeland Security. Along with those changes came a creeping concern about government overreach, although Americans as a whole remained fairly positive.

That attitude has eroded in the years since, with far fewer people now saying the government is doing a good job protecting rights including the freedom of speech, the right to vote, the right to bear arms and others. 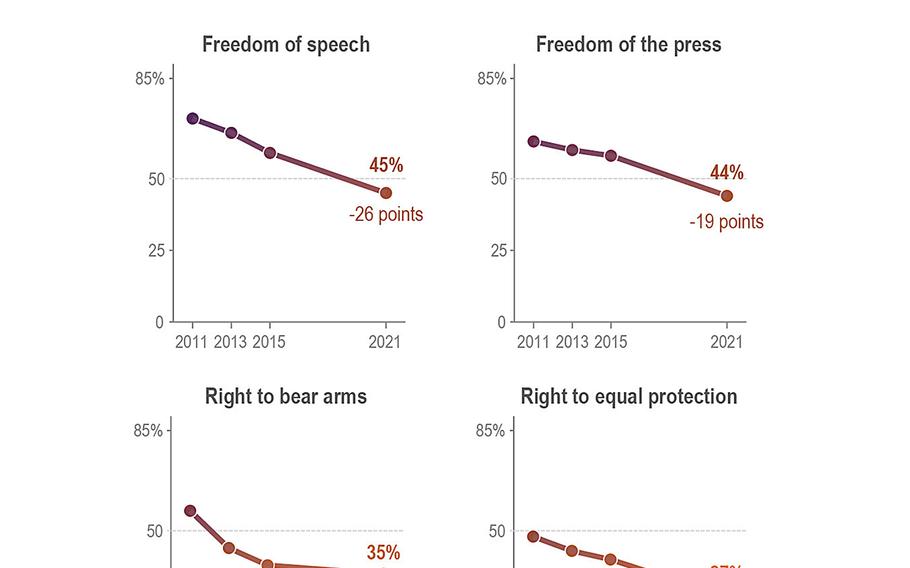 A new AP-NORC poll finds Americans are less likely than 10 years ago to think the government is doing a good job protecting rights guaranteed under U.S. law, including freedom of speech and the right to vote. (Kati Perry/AP)

Dee Geddes, 73, a retiree in Chamberlain, South Dakota, said she was frustrated at the government's apparent lack of ability to safeguard the amount of private information available, especially online.

"It bothers me when I can go on the internet and find pretty much anything about anybody. It makes me feel sort of naked," said Geddes, who identifies as a Republican. "It does bother me how much the government knows about us, but that goes back to the fact that there's so much out there period. It's discouraging."

About half now say the government is doing a good job protecting freedom of religion, compared with three-quarters who said the same in 2011.

More Americans now think the government is doing a poor job than a good one at protecting the right to equal protection under the law, 49% to 27%. In 2011, opinions were reversed, with more people saying the government was doing a good job than a poor one, 48% to 37%.

The poll also finds that 54% of Americans say it's "sometimes necessary for the government to sacrifice some rights and freedoms to fight terrorism," compared with 64% a decade ago. Now, 44% say that's never necessary at all.

Brandon Wilson, 23, a business and animation student at College of DePage in Glen Ellyn, Illinois who described himself as a conservative, said he understood that steps taken after Sept. 11 may have initially seemed to constrain Americans' rights, but that he ultimately felt the actions had been for the greater good.

"I think it's a good idea," Wilson said of measures such as increased airline passenger screening. "The government is helping the general public and, overall, trying to make people's lives better."

On the whole, though, Americans have grown more wary of government surveillance in the name of national security, the poll shows.

The poll asked about a variety of rights and liberties, including many of those outlined explicitly in the Constitution's Bill of Rights, as well as several protected by laws and court rulings.

Americans are about equally divided on how the government is doing at protecting the freedom from unreasonable search and seizure. About one-third say it's doing a good job and about one-third say it's doing a poor job. In 2011 and 2015, views were slightly more positive than negative, though less than half of Americans said the country was doing a good job.

Tony Gay, 60, a retiree who lives in Cincinnati, said that he generally supported the government's moves to protect civil liberties. He said his 10 years of Army service helped reinforce his opinion that sacrifice is sometimes necessary to safeguard freedoms.

"You can't have your freedom 24/7 if there's no one there to protect it," Gay said. "So when they put restrictions on travel, I'm all for that, because it's to make sure that I'm safe, and make sure that the person next to me is safe."

Forty-three percent of Americans think the U.S. government is doing a good job protecting the right to vote, while 37% say it's doing a poor job. By comparison, 70% said it was doing a good job in 2015 and 84% said the same in 2011.

Democrats are more likely than Republicans to say the government is doing a good job of protecting several rights and freedoms, including the freedom of religion, the freedom of speech, the freedom of the press and the right to keep and bear arms.

Even if he's relatively comfortable with the government's protection of basic civil liberties, Gay said he feels periodic review of the policies, and those making them, should be necessary.

"It's like when you're in politics, you have free rein," Gay said. "It gives me mixed feelings about who is watching over us."

The AP-NORC poll of 1,729 adults was conducted Aug. 12-16 using a sample drawn from NORC's probability-based AmeriSpeak Panel, which is designed to be representative of the U.S. population. The margin of sampling error for all respondents is plus or minus 3.2 percentage points.