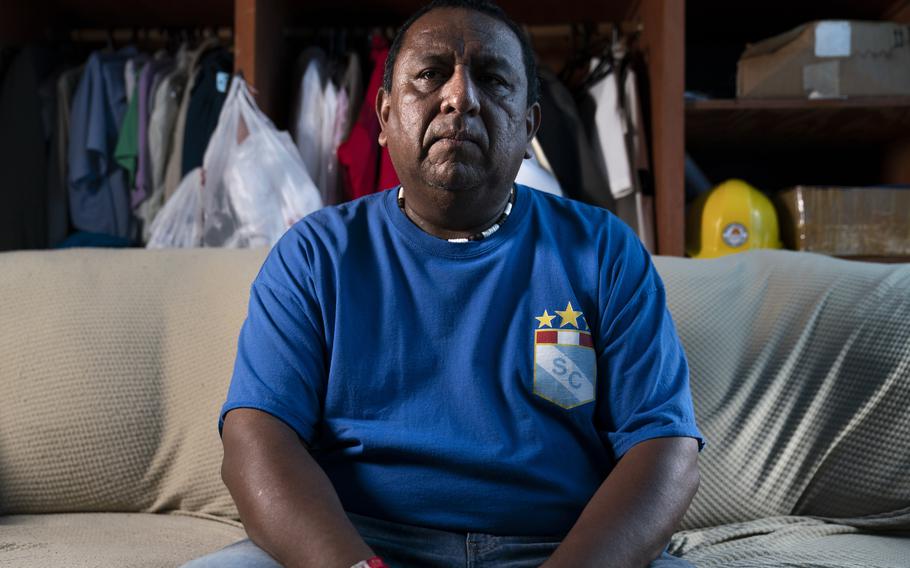 Franklin Anchahua-Herrera sits for a portrait in a room that he shares with his father, Tuesday, Aug. 17, 2021, in the Queens borough of New York. Anchahua-Herrera has several health conditions certified by the World Trade Center Health Program that are approved for treatment benefits for individuals who worked at the site in the aftermath of the 9/11 terrorist attacks. (John Minchillo/AP)

NEW YORK — Franklin Anchahua cleared thick layers of dust in offices, apartments and even in a chapel in lower Manhattan for weeks after the Sept. 11 attacks.

At first, he treated his heartburn and acid reflux with herbs his mother would send from Peru. He avoided available health programs because he lives illegally in the U.S. and feared deportation.

Until the discomfort was too much.

“It was awful. I needed medical treatment, a specialist. I also had breathing problems,” said Anchahua, 50, who sought care for the first time at Bellevue Hospital in 2011.

He and other immigrants, mostly Spanish-speaking clean up workers, have long asked to obtain legal immigration status in the U.S. as a way to compensate for the work and subsequent health problems they suffered after the attacks.

But 20 years after 9/11, only several dozens are still participating in protests and making the request, while others have abandoned that fight.

“It is hard to find a job here without immigration status,” Anchahua said. “Attorneys who helped us years ago told us we would get immigration papers but, look, 20 years have passed and we have nothing.”

Not as visible as those who worked on the World Trade Center rubble pile, some of these cleaners didn’t seek medical help immediately because they feared deportation, ignored how to navigate the application process or did not know help was available.

While some say they feel forgotten by the U.S. government, others returned to Latin America.

Hired informally by cleaning companies, they cleared debris, asbestos and dust inside lower Manhattan buildings for months without adequate protective gear. Some are struggling to cope with how the disaster transformed their lives, saying they are also treated for anxiety, depression and post traumatic disorder.

A few of them are organizing a small protest in October to push the government to establish a pathway for legal residency for immigrant cleanup workers.

They have done similar protests in the past. Former U.S. Rep. Joseph Crowley announced a bill in 2017 to put Sept. 11 responders and cleanup workers on a fast track to legal immigration status in the U.S. His office estimated then that 1,000 to 2,000 immigrants would be covered.

The bill did not go very far; it was not reintroduced by any of Congressman Crowley’s fellow cosponsors after he retired.

The office of Rep. Alexandria Ocasio-Cortez, who defeated Crowley in midterm election primaries in 2018, told AP it was “actively” exploring the possibility of reintroducing the bill.

“The Congresswoman is also supportive of greater immigration reform, co-sponsoring many pieces of legislation that would have provided a path to citizenship for these workers as well as others,” said Ocasio-Cortez spokesperson Lauren Hitt.

While many of the cleaners were from Latin America, others were from Poland and other European countries. They organized in different groups and shared information about medical help and forms of compensation.

Rosa Bramble Caballero, a licensed clinical social worker, has helped these workers for 15 years, first in partnership with state and local programs to assist them and afterward voluntarily, organizing meetings at the basement of her office in Queens.

Dozens of cleanup workers have shown up there to talk, eat chicken and cheese empanadas, and sip coffee together.

“This became a space so they could feel safe, talk about their lives, about their needs, but most of all, support each other, not feel alone,” said Bramble Caballero.

Lucelly Gil, a 65-year-old Colombian, is a regular at the Queens gatherings.

She received compensation from the federal victims fund after developing breast cancer and takes medication for rhinitis and gastritis. She is being treated for depression and uses an asthma inhaler.

Gil spent six months cleaning debris in lower Manhattan, at government offices, banks and restaurants. She made about $60 for every eight hours of work.

She said she had nightmares for a long time after seeing first responders retrieve body parts. She vividly remembers her cough while working and the rashes in her skin after tearing down fiberglass insulating paper from walls.

“Instead of giving us some compensation, they could have given us (immigration) papers,” she said. “All of us, all of the Hispanic workers, we saw the consequences of that cleanup work later on.”

More than 112,000 people have enrolled in the federal World Trade Center Health Program, which offers free medical care to people who can document that they were exposed to dust from the twin towers, regardless of their immigration status.

Many of those enrollees have mild or controllable conditions, like heartburn, chronic sinus problems or asthma, that are common in the general public and may or may not be linked to the attacks. Others are more seriously ill or developed conditions rare for their age group.

Joan Reibman, medical director at the World Trade Center Environmental Health Center, which has treated cleanup workers for years, said that many of them have developed a significant reduction in lung function, digestive disorders and PTSD.

“They were exposed to terrible sights in those days,” she said.

They faced barriers in seeking care, like economic vulnerabilities and not belonging to a union, she said.

About 800 cleanup workers are treated at the WTC Environmental Health Center, one of several places they could potentially get care.

The medical programs do not ask about immigration status.

About four years ago, Anchahua, the Peruvian immigrant, received $52,000 after filing a claim against the cleaning company he worked for in lower Manhattan after the attacks. Early last year he moved back to Peru to assist her elderly mother and a sick brother.

He decided, however, to return to New York this year after not finding work in his homeland and concluding that he needed to continue medical treatment. He asked the U.S. government for a humanitarian visa, which was denied. He crossed the border illegally through Mexico last month.

Luis Soriano, another cleanup worker, also left for Latin America but decided not to return to the U.S.

“My mother was getting old so I moved to Ecuador in 2016. But my health wasn’t great,” said the 59-year-old artisan mannequin maker in a phone interview.

Soriano cleared debris for three months around Fulton Street. He still sometimes feels fatigue or shortness of breath.. Medication for that, however, is expensive in Ecuador and he can’t afford it, he said.

“We need to be remembered. We were all immigrants who contributed to the U.S. We worked hard there, paid taxes, grew old there. Some cleanup workers I knew died of cancer,” he said. “We should all be remembered for what we did.”