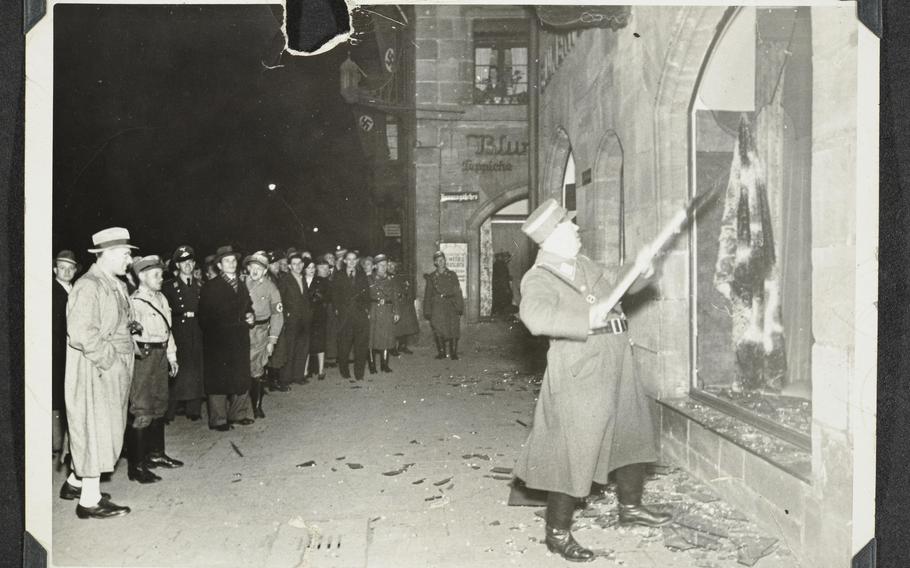 This photo released by Yad Vashem, World Holocaust Remembrance Center, shows German Nazis and civilians watching the ransacking of Jewish property during Kristallnacht intake most likely in the town of Fuerth, Germany, on Nov. 10, 1938. Israel’s Yad Vashem Holocaust memorial acknowledged Sunday that a series of photos from Nazi Germany’s 1938 pogroms against Jews have been seen and published before, revising a claim it made when releasing the photos last week. (Yad Vashem via AP)

JERUSALEM — Israel's Yad Vashem Holocaust memorial acknowledged Sunday that a series of photos from Nazi Germany's 1938 pogroms against Jews have been seen and published before, revising a claim it made when releasing the photos last week.

The photos, which were recently donated by a former U.S. serviceman's family to Yad Vashem in Jerusalem, show rare close-up images of Nazi officials carrying out looting and destruction of Jewish property in Nuremberg and a nearby town.

Yad Vashem said the photos were "never-before-seen," but many in the collection had in fact been published on Twitter, in a research publication, and a recent PBS documentary. The group acknowledged the error in reply to a query from The Associated Press.

After the pictures released by Yad Vashem last week were published in the media, including by the AP, the serviceman's granddaughter, Elisheva Avital, tweeted that Yad Vashem's announcement was "inaccurate."

She had posted several photos in a Twitter thread in 2018 that went viral, and multiple shots were published in a book, "New Perspectives on Kristallnacht" by Purdue University Press in 2019, and more than a dozen appeared in the PBS series "The U.S. and the Holocaust" by documentarian Ken Burns.

Yad Vashem said that despite its error, "the public remained mostly unaware of the collection's existence and value" and that the organization's announcement was "newsworthy regardless of previous partial exposure."

Yad Vashem released the photographs on the 84th anniversary of the November pogrom also known as Kristallnacht, or "The Night of Broken Glass." Mobs of Germans and Austrians attacked, looted and burned Jewish shops and homes, destroyed 1,400 synagogues, killed 92 Jews and sent another 30,000 to concentration camps.

The violence is widely considered a starting point for the Holocaust, in which Nazi Germany murdered 6 million Jews.