A vice president testified before Congress; it was a disaster 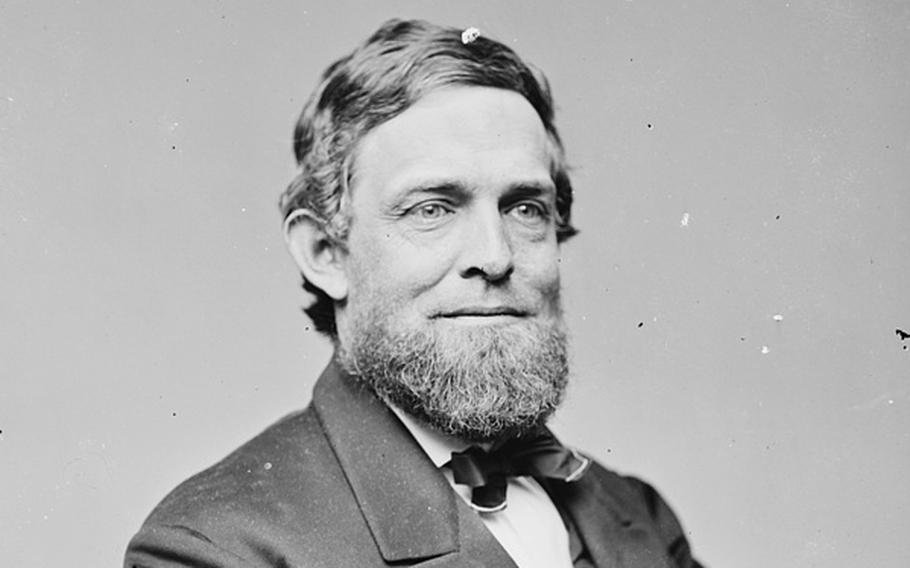 By any measure, 1872 was a lousy year for Vice President Schuyler Colfax, the Indiana Republican elected four years earlier on a ticket with Ulysses S. Grant.

Republicans dumped him in June as their candidate for vice president. His mother died in August. He lost the chance to take the helm of one of the nation's most influential newspapers at the end of the year. And on top of everything, he was implicated in September in a notorious influence-peddling scandal involving Credit Mobilier of America, the profitable construction company formed to build the Union Pacific Railroad.

When the opportunity came in the new year to clear his name, Colfax jumped at the chance. He appeared before the House committee investigating the sale of deeply discounted Credit Mobilier stock to members of Congress in the winter of 1867-1868 by Rep. Oakes Ames (R-Mass.), a railroad financier heavily invested in the Union Pacific Railroad and Credit Mobilier.

Almost 150 years later, former vice president Mike Pence — another Indiana Republican — incorrectly asserted last month that "it would be unprecedented in history for a vice president to be summoned to testify on Capitol Hill." In fact, Colfax was so eager for exoneration that he testified four times before the investigative committee led by Rep. Luke Potter Poland (R-Vt.) and on several occasions questioned witnesses.

A blockbuster scoop on Sept. 4, 1872, by the New York Sun named Colfax, who was speaker of the House at the time of the stock sales, and a handful of prominent Capitol Hill Republicans as beneficiaries of Ames' largesse. Ames admitted — first to a fellow investor and later to the committee — that he sold the Credit Mobilier shares to his colleagues well below market value because the Union Pacific needed friends in Congress. 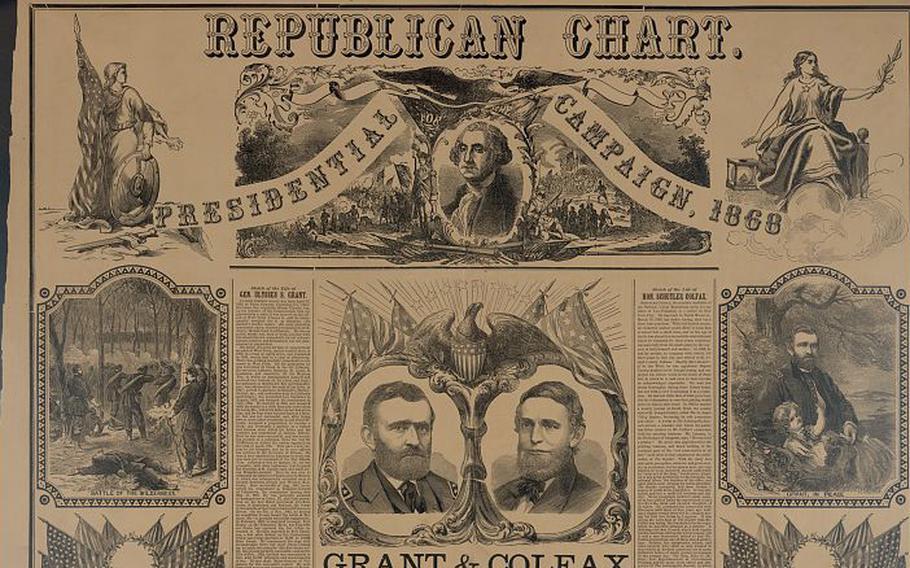 A campaign poster for Ulysses S. Grant and Schuyler Colfax. (Library of Congress)

It made sense for Ames to approach Colfax, an amiable lawmaker nicknamed "Smiler." A former newspaper editor from South Bend and an ardent opponent of slavery, he was elected to Congress in 1854 and swiftly ascended to leadership positions in the House — first as chairman of the Committee on Post Office and Post Roads and then as speaker.

"Genial and cordial, with unfailing tact and aptitude, skillful in cultivating friendships and never provoking enmities, he had in a rare degree the elements that insure popularity," Republican bigwig James G. Blaine wrote. But Blaine noted something else - a lack of "the more rugged and combative qualities which diminished his force in the House."

In other words, Blaine thought Colfax was a bit of a lightweight.

In the aftermath of the Sun's scoop, Colfax professed to be unconcerned about the allegations. He had been replaced on the Republican ticket in June by Sen. Henry Wilson of Massachusetts (who, like Colfax, would be implicated in the scandal), and he seemed delighted to be out of the fray. But when Horace Greeley, the longtime editor of the New York Tribune running for president as a Democrat, campaigned in Indiana and cited Credit Mobilier as an example of corruption in Washington that required "purification," the scandal could no longer be ignored.

Colfax told a hometown crowd in South Bend that in his years in public life, "no man ever dared make me a dishonorable proposition" and that "neither Oakes Ames nor any other person never gave or offered to give me one share, or twenty shares, or two thousand shares in the Credit Mobilier."

Greeley's death in November opened a road to redemption for the embattled vice president and onetime newspaper editor. Colfax was a front-runner to succeed Greeley at the helm of the Tribune but faced resistance from his wife and hesitated to seek the job, which went to distinguished correspondent Whitelaw Reid while Colfax dithered.

Suddenly, the Poland committee offered Colfax his only remaining chance to resuscitate his reputation. He testified under oath to the committee on Jan. 6, "I state explicitly that no one ever gave, or offered to give me, any shares of stock in the Credit Mobilier, or the Union Pacific Railroad. I have never received, nor had tendered to me, any dividends in case, stocks, or bonds, accruing upon any stock in either of said organizations."

Nevertheless, he conceded things were more complicated than he had indicated in South Bend. Ames had, in fact, approached him about buying Credit Mobilier shares, and he told his Massachusetts colleague that the stock "looked like a good and safe investment for one of limited means." Several weeks later, he said, he paid Ames $500 but backed out of the deal after hearing rumors of "unpleasant controversies" among Credit Mobilier stockholders that were likely to lead to litigation. He said he told Ames, who he thought was facing financial difficulties, to keep the $500.

"Instead of being enriched" by Credit Mobilier, Colfax said, "I am voluntarily out of pocket five hundred dollars, and have been for nearly five years."

Some found his testimony credible. "Told by Mr. Colfax, it is not a story to be doubted," Harper's Weekly concluded. Others were more skeptical. The Nation dismissed Colfax's testimony as an example of "explanations which make a thing appear worse than it really is." 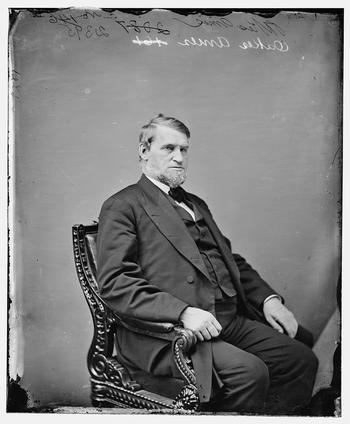 There matters might have rested. But as one witness after another claimed innocence or denied doing business with Ames, the Massachusetts lawmaker concluded he was being set up to take the blame for the scandal and returned to the committee with additional details.

After examining his records, Ames said he had paid Colfax $1,200 in dividends with a check marked with the initials "S.C." "I could not have had $1,200 added to my income without remembering it very positively," Colfax told the committee on Jan. 24. But that assertion appeared to be contradicted four days later by testimony that revealed Colfax made a $1,968 deposit at a Washington bank, with $1,200 in cash, three days after Ames wrote him a check in the same amount.

Colfax returned to the committee on Feb. 11 to explain the $1,200 deposit with a convoluted tale involving the sale of a piano to a relative for $200 and the receipt by mail of a surprise $1,000 contribution from a New York supporter named George F. Nesbitt. Colfax testified to the committee for a final time eight days later to volunteer additional details about his relationship with Nesbitt.

Although family members corroborated his story, few believed it. The newspaper he might have led was particularly skeptical. "If Mr. Colfax's statement is true," the Tribune concluded Feb. 12, "he is the victim of a train of circumstantial evidence almost unparalleled in judicial history." The Nation was even more damning: "On the whole, as far as Mr. Colfax is concerned, the affair wears a very hopeless outlook."

The Poland committee's investigation ended inconclusively. It recommended the expulsion of Ames and Rep. James Brooks of New York, the only Democrat implicated in the scandal. (The House voted to censure Ames and Brooks instead.) Everyone else was exonerated on the grounds that they believed Ames was offering an innocent business proposition rather than a bribe.

About Colfax, the committee made no official finding. But the verdict of public opinion weighed heavily on him. On March 4, the day Grant was sworn in for a second term, Colfax gave a valedictory address in which he defended his conduct in office. But Grace Greenwood of the New York Times noted his "pale, careworn, and sad" appearance.

"Mr. Schuyler Colfax has looked very much worn as of late," the National Republican editorialized. "To a great extent we express the sentiments of all shades of politicians when we state our sincere regret" that Colfax leaves office "under such painful and pitiful circumstances. To all human appearances the shadow which now darkens his future can never be removed."