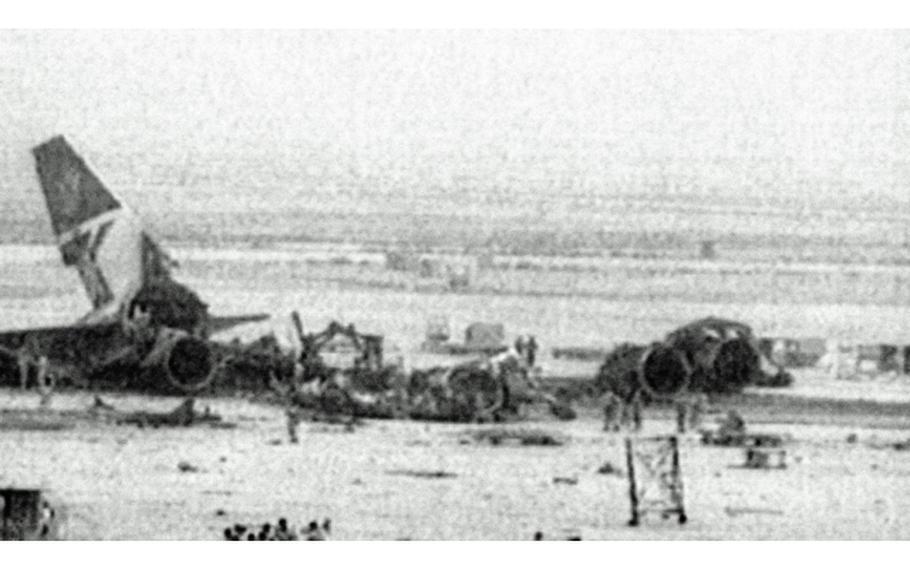 The wreckage of British Airways BA 149 which landed in Kuwait hours after Iraqi forces had entered the country and whose passengers and crew were detained by the invading forces and held hostage for up to five months. According to reports on Tuesday, Nov. 23, 2021, files being released to the National Archives show that the warning to the Foreign Office that Iraqi forces had entered Kuwait was not passed on to British Airways even though it had a flight heading to the Gulf state. (PA Wire)

LONDON — More than 300 passengers and crew on a British Airways flight could have been spared a months-long hostage ordeal in 1990 in Kuwait if Britain's Foreign Office had informed the airline that Iraq had commenced its invasion of its oil-rich Persian Gulf neighbor, newly disclosed files showed Tuesday.

According to the files, the British ambassador to Kuwait warned the Foreign Office that Iraqi forces had crossed the border an hour before Flight BA149 from London to Kuala Lumpur touched down in Kuwait for refueling in the early hours of Aug. 2, 1990. That information was passed to other parts of government and to the intelligence services, but not to the airline, which was thereby not able to divert the flight.

Within hours of landing, passengers and crew had been detained by Iraqi troops. Many then spent nearly five months used by Iraq's then-dictator Saddam Hussein as "human shields" in an attempt to thwart a retaliation from Western forces — they were dispersed to potential targets across Iraq and some suffered post-traumatic stress after being subjected to abuse, including mock executions, and witnessing atrocities.

The files were disclosed under the so-called "20-year rule," whereby government papers are progressively released to the public. Before 2013, the papers were released after 30 years.

Foreign Secretary Liz Truss said it is "unacceptable" that it took so long for the truth to come out about the warning from the ambassador, Michael Weston.

In a written statement to lawmakers, she expressed her "deepest sympathy" to those who were detained and subsequently mistreated.

There has been widespread speculation since the flight landed in Kuwait that a group of around 10 men were aboard the flight for the purpose of gathering information about Iraq's intentions. In the weeks running up to the invasion, Saddam's government had adopted an increasingly bellicose tone to its neighbor, voicing historic grievances primarily related to its oil reserves.

The British government has faced claims that it allowed the flight to go ahead despite the danger because it was carrying a Special Forces team it wanted to infiltrate into the country.

"The government at the time did not seek to exploit the flight in any way by any means whatsoever," she said, in diplomatic language that has been used by government officials for years.

The release of the papers was met with deep skepticism by passenger Barry Manners, who was a 24-year-old businessman at the time.

Manners, who said he spent two years recovering from his ordeal upon his release in December 1990, said he is "gobsmacked" at the suggestion there were no military personnel on board.

The people detained were released at different stages for a variety of reasons. By the middle of December 1990, the last of the hostages had been freed. A month later, a United Nations coalition, led by the United States, started an intensive air campaign against Iraqi troops before the ground offensive commenced on Feb. 24, 1991. Within four days, Kuwait had been liberated. The allied forces did not pursue Iraqi troops and Saddam Hussein was able to consolidate his power, remaining in power until April 2003 after the U.S.-led invasion of his country in the wake of the 9/11 attacks.