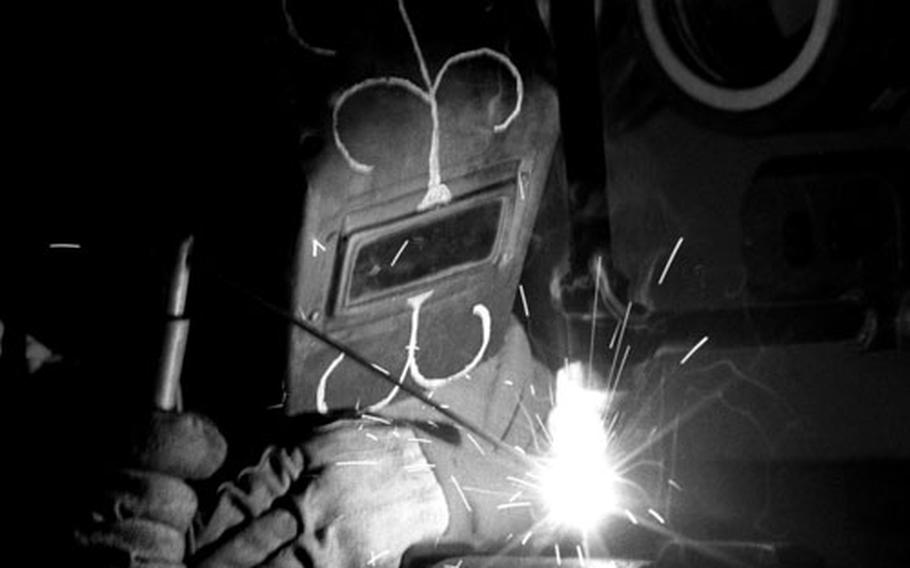 NAPLES — Consolidation is the key word in industry and government — including the military — in this day of economical awareness and "snipes" aboard the guided missile cruiser Little Rock here are keeping up with the times.

"Snipes" is the nickname given to those in Navy ratings who work below decks — some of which include machinist's mates, enginemen, boilermen and, of course, the seaman's counterpart in the bowels of the ship — the fireman.

The dirty, sweating men assigned to the Main Propulsion Repair Team on the Little Rock are snipes — and proud of it.

Thirteen men who work in the ratings of Machinery Repairman and Hull Technician make up the team. The men assigned to the Main Propulsion Repair Team on the Little Rock were known as "snipes." (Gus Schuettler/Stars and Stripes) Deano Marchese at work on the 6th Fleet flagship. (Gus Schuettler/Stars and Stripes) 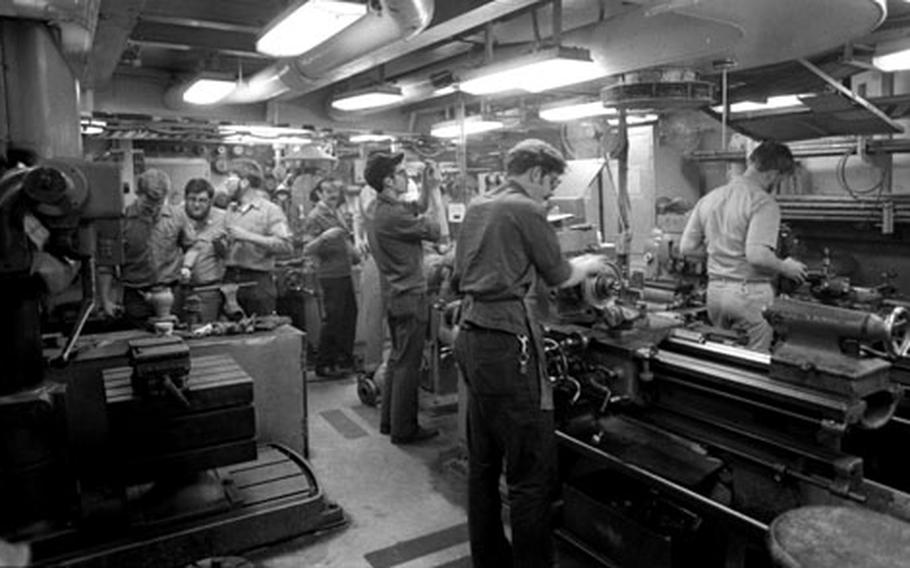 These men, who also operate drill presses, grinders and milling machinery, perform the jobs that a tool and die maker would in civilian life, according to a senior petty officer.

"Hull Techs in this shop do the welding, brazing and handle the cutting torches," Milam said.

"Normally, these men would be working in separate shops but Lt. Cmdr. Robert Nerup, chief engineer, consolidated the effort and made up this team of specialists that work in the holds — which is what we call the engine room and the fireroom.

"Our consolidated shop is now close to the holds where the finished product ends up. This, combined with the shared working space, saves lots of time and energy that we used to waste before.

"It's a new concept developed on the Little Rock and, as far as I know, we're the only ones working this way. It has really worked out well and these guys are now experts on repairing equipment in the holds," said Milam.

Lathes turn, and sparks fly 14 hours a day while the ship undergoes what the Navy calls "tender availability period" here in the S.E.B.N. Italian shipyard.

"This is a good time for us. We can get a lot accomplished during this period that we can't when the boilers are lit off and we're under way," said Milam.

The Little Rock, flagship for the commander, 6th Fleet, is alongside the tender Piedmont which is tied up to the pier here in the bustling port of Naples.

"The tender takes care of our heavy work — stuff we don't have the equipment or the space to work on here — and the shipyard also provides industrial, assistance," Milam said.

The repair team, which works out of the mini-factory in the hot spaces below decks in the Little Rock, has rebuilt more than 300 valves since Nerup came up with the idea of consolidation in late August, according to ship's engineers.

"With our operating budget, there is no way we could afford to buy new valves. You can imagine how important our job is to an old ship that always needs a lot of repair work and constant upkeep — like the Little Rock," said Milam.