Having veterans as mentors is key to treatment court success stories 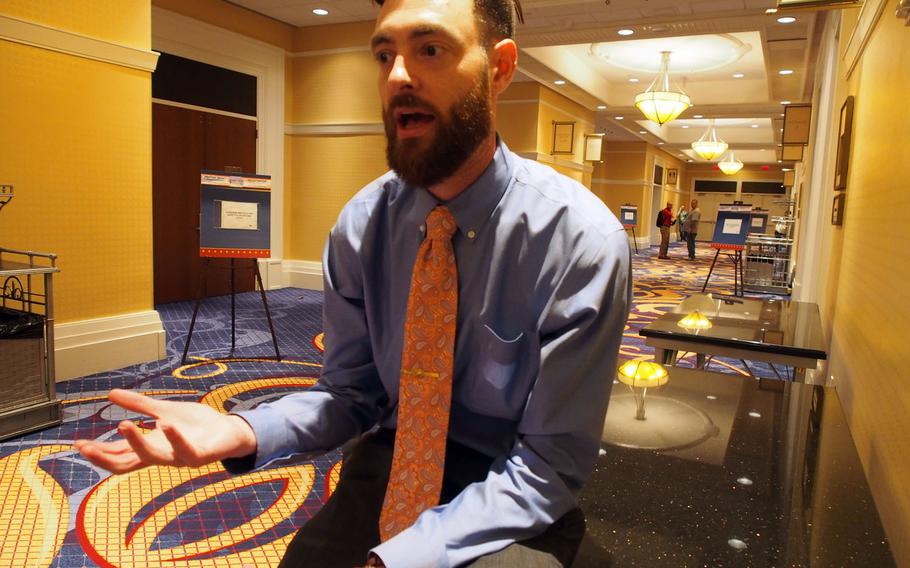 David Pelletier, a former Marine who once faced a felony DUI charge, leads a national program to train veterans to mentor their comrades through the veterans treatment court system, an increasingly popular treatment-based alternative to criminal courts. (Heath Druzin/Stars and Stripes)

David Pelletier, a former Marine who once faced a felony DUI charge, leads a national program to train veterans to mentor their comrades through the veterans treatment court system, an increasingly popular treatment-based alternative to criminal courts. (Heath Druzin/Stars and Stripes) 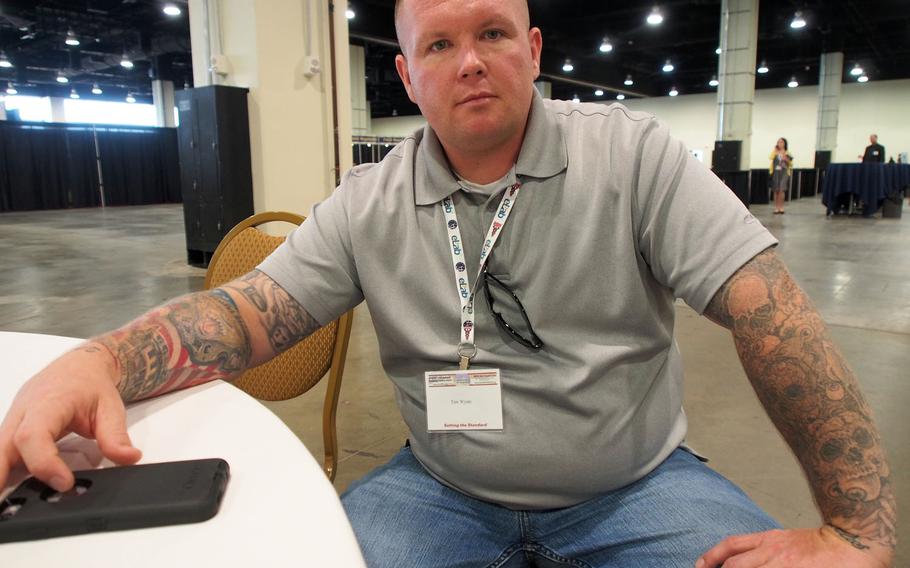 Tim Wynn, who served in Iraq with the Marines, went from in and out of jail to a mentor for other veterans after graduating from a veterans treatment court. More and more jurisdictions are setting up the courts, which aim for rehabilitation as an alternative to incarceration for veterans facing criminal charges. (Heath Druzin/Stars and Stripes) 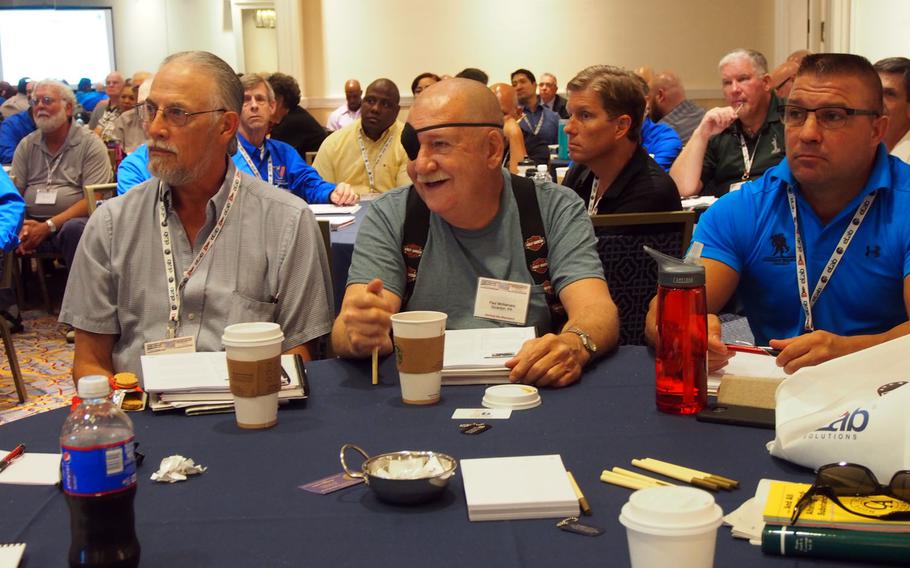 Veterans receive training to become mentors for offenders going through veterans treatment courts. More than 100 would-be mentors gathered for training as part of a national conference on veterans justice in Maryland this week. (Heath Druzin/Stars and Stripes)

NATIONAL HARBOR, Md. — Marine veteran David Pelletier was facing yet another drunken driving charge in 2006, and this time it was a felony. He drank himself through his 20s and this, it seemed, was the logical end.

Facing jail time and an uncertain future, before veterans treatment courts existed, he got some good advice from a fellow veteran who had struggled with alcohol: Get serious about cleaning up and use your GI Bill to turn your life around. He caught a break when his charge was reduced to a misdemeanor.

Nine years later, Pelletier — now 38, sober, with a law degree — is leading a nationwide recruiting effort to find and train veterans like the one who helped him. The mentors will work with the increasingly popular veterans treatment courts, set up to offer an alternative to jail for former servicemembers. More than 100 vets from 27 states came to the Veterans Court Convention this week in National Harbor to get training. From there, they will work with their local veteran courts.

Veterans mentoring veterans is a key part of the program, said Pelletier, who works with the Alexandria, Va.-based Justice for Vets, an advocacy group that is leading a nationwide effort to increase the number of courts. They help veterans find services, such as Veterans Affairs health care, and benefits like the GI Bill, but they also provide guidance from a perspective the court’s offenders can understand.

“We have a common language,” he said. “It really gives you permission when another veteran who’s experienced it says, ‘It’s OK, it’s not a sign of weakness’” to ask for help.

Offender to mentor The idea of veterans treatment courts is similar to drug courts — giving some offenders, usually accused of low-level crimes, the option of a treatment program as an alternative to jail. In the case of veterans courts, the treatment and mentoring is tailored to and often carried out by those who have served in the armed forces.

The treatment addresses substance abuse and mental health issues, which proponents of the courts say lead to much of the crime committed by vets. In addition, mentors help vets going through the court system get connected to VA health care and education benefits.

As awareness about the toll of war on troops has grown and veterans of the recent wars in Iraq and Afghanistan have returned, the courts have gained in popularity. They rely on mentors, like Tim Wynn, who can easily relate to troubled military comrades.

Wynn, 35, who told his story in front of 1,000 people at the opening of the conference, said he was “deep into drugs and alcohol.” He was arrested over and over, spent a total of a year in jail, lost his family and lost his mind.

Even after he got sober, he couldn’t control a temper fueled by his experience in Iraq, etched in ink across his arms and invisibly in his brain, that would throw him into violent rages. But after a road rage incident where he attacked another driver and was charged with assault, he found himself in veterans court in Philadelphia. He finally got treatment for post-traumatic stress disorder, which had gone undiagnosed for more than a decade.

These days, Wynn occasionally finds himself in a crack house at 4 a.m. As a certified peer specialist, he’s there to help a veteran whose predicament he knows well.

“My clients are me two years ago,” he said.

‘Stiff backbone’ Judge Robert Russell Jr. gaveled the first veterans treatment court to order in 2008. Seven years later, there are more than 220 around the country and dozens more in the works. About 1,000 judges, mentors, advocates and graduates of the program came to the National Harbor conference this week.

Department of Veterans Affairs Secretary Bob McDonald was the keynote speaker and on Thursday supporters of the court will descend on Capitol Hill to lobby senators to match $15.5 million in federal funding that the House has passed for the courts, which are funded with a mix of federal and local money.

“This is an exciting time for the veterans treatment court movement,” Justice for Vets Senior Director Melissa Fitzgerald said. “The courts are working and they’re returning healthy veterans to their families and their communities.”

That’s a long way from the early days of the movement, said Patrick Welch, a 68-year-old Vietnam veteran who helped set up the first court with Russell in Buffalo, N.Y., who attended the Maryland conference as a senior mentor.

“Nine years ago, you couldn’t get anyone to talk to us,” he said.

While backers of the courts speak of a moral imperative to give veterans a second chance, they also speak in practical terms. Judge Patrick Dugan, a 55-year-old Iraq and Afghanistan veteran who heads the Philadelphia veterans treatment court, said helping veterans get well instead of locking them up provides communities with productive members and ultimately saves taxpayer money. Graduates have recidivism rates that are lower than those who go through traditional courts, he said.

“Rather than warehouse them in jail and throw them away, the veterans courts gives them an alternative,” he said. “It’s not soft on crime, it’s actually very smart.”

There are still many jurisdictions that lack veterans courts, which Dugan says is partly because so many different parties - judges, prosecutors, defense attorneys, politicians -- have to buy in to the idea. Some worry about looking bad if the worst-case scenario happens.

“The biggest concern of anyone in the system is the next terrible headline, the next veteran who is in a veterans court who goes and does something horrendous,” Dugan said. “You have to have a stiff backbone to get involved in specialty courts.”

Wynn, who graduated from Dugan’s court a little more than a year ago, credits the program with giving him back his family, his dignity and his sanity. Without the second chance, he’s pretty sure what would have happened.

“I would be one of those 22 veterans a day” who commit suicide, he said. “I would have put a bullet in my head. Everything’s different and it’s all because of veterans court.”

More information on veterans treatment courts, as well as an interactive map of locations, is at www.justiceforvets.org.