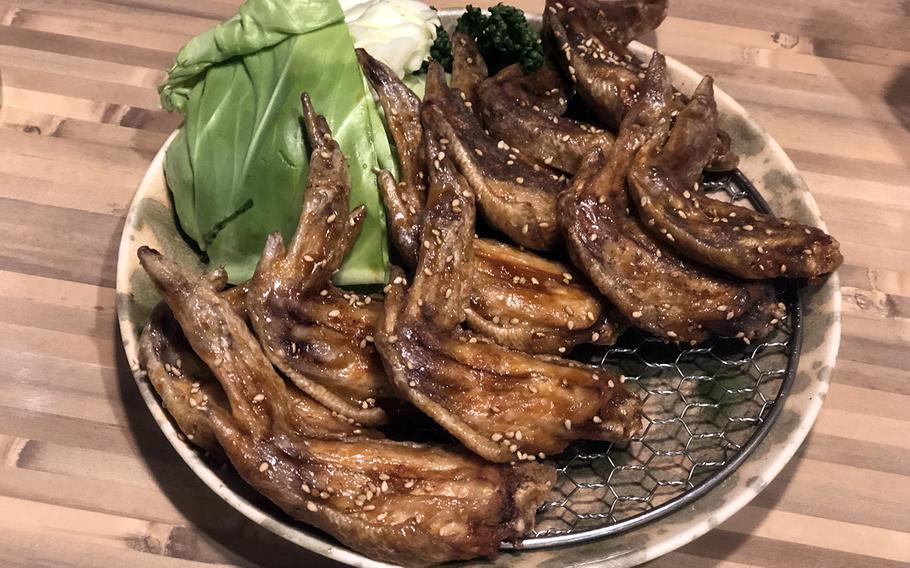 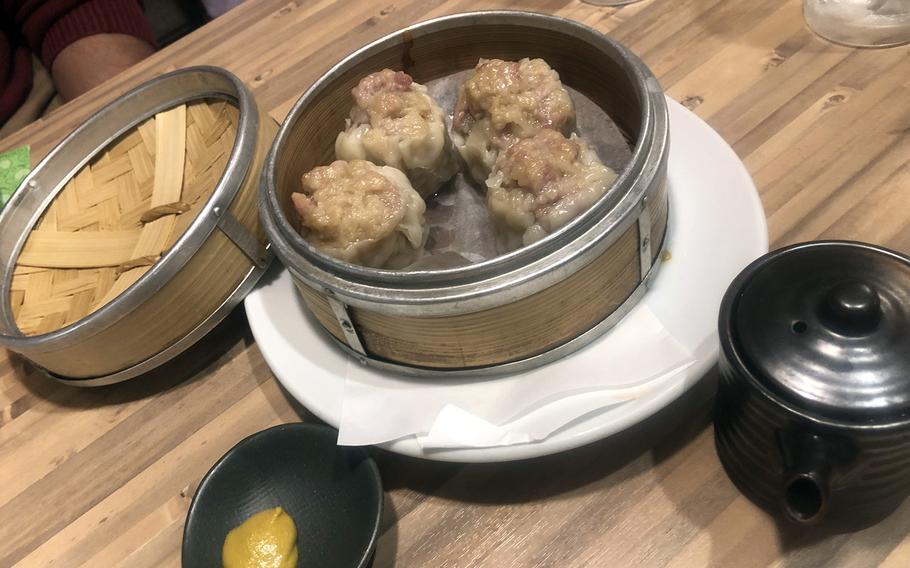 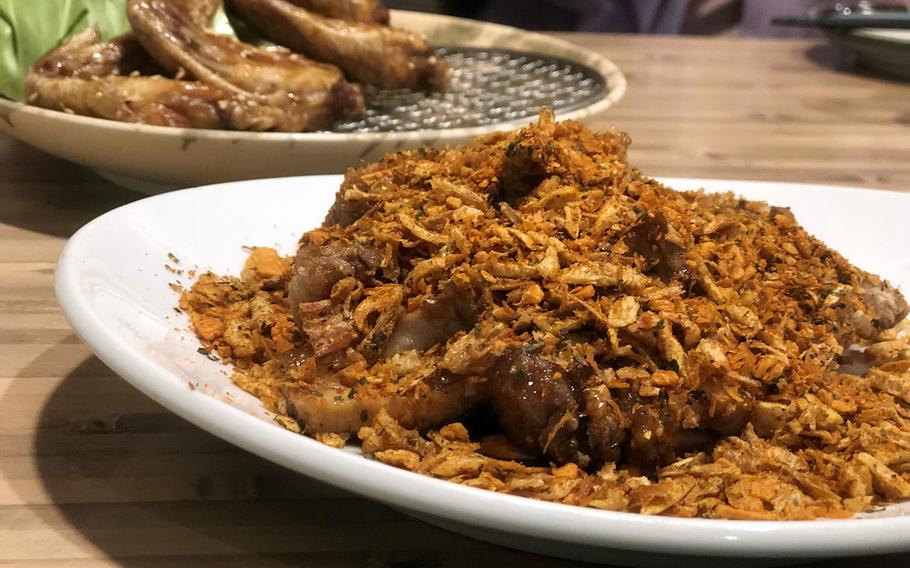 A favorite dish at Toriyoshi Shoten is the crispy yamitsuki chicken, which is pieces of chicken thigh covered with seasoned, spicy fried crisps. (Caitlin Doornbos/Stars and Stripes)

Toriyoshi Shoten, which translates to “good chicken store” in Japanese, offers a variety of dishes, but its specialty is poultry.

Located on the colloquially named “Blue Street” near the naval base in Yokosuka, the restaurant serves chicken any way you like it.

The first floor of this izakaya is a bar, while the second floor features open seating and private tables in intimate settings adorned with traditional Japanese rice-paper doors. An izakaya is a Japanese bar that serves small portions of food to snack on while drinking booze.

Orders are submitted at the table with an easy-to-use tablet menu with English.

An order of Toriyoshi Shoten’s chicken wings (519 yen, or about $4.80) are seasoned with sesame seeds in three flavors: sweet, spicy and hot, but don’t expect American-style buffalo wings. Toriyoshi Shoten’s wings are served in the Tebasaki cut of Nagoya-style wings, which include all parts of the wing from the shoulder to the tip, doubling the size of a traditional hot wing.

The restaurant keeps lovely vases on the tables, but they’re not just decoration. Stick the bones from your chicken wings inside and your waiter will dispose of them.

The crispy yamitsuki chicken (755 yen) is pieces of thigh covered with seasoned, spicy, fried crisps. The tenderness of the meat and crunch of the chips combine for a satisfying texture.

The restaurant also offers non-chicken dishes including large, meaty shumai dumplings (204 yen) and a fried sweet potato and clam fritter (539 yen) that tastes a lot better than it sounds.

At an izakaya, not only is there a vast selection of snacks and meals, but also drinks from the bar. I tried a grapefruit sour (519 yen), made with fresh juice and shochu, while a friend had a blend of orange, honey and shochu (431 yen).

Also on the drink menu are beers, sake, liquors and wines, as well as nonalcoholic beer and soft drinks.

Toriyoshi Shoten’s portions are small, so I suggest ordering several and sharing them family style.

Location: 1-1-2 Wakamatsucho, Camaya Building, Yokosuka, Kanagawa 238-0007Directions: From Yokosuka-Chuo Station, take the east exit and cross the main road, known locally as “Blue Street.” Then, make a left and walk one block. The restaurant will be on your right. Look for a drawing of a chicken in the window.Hours: 24 hoursPrices: Dishes start at 200 yen, while drinks average about 500 yen per glass.Dress: CasualInformation: 81-468-28-3911