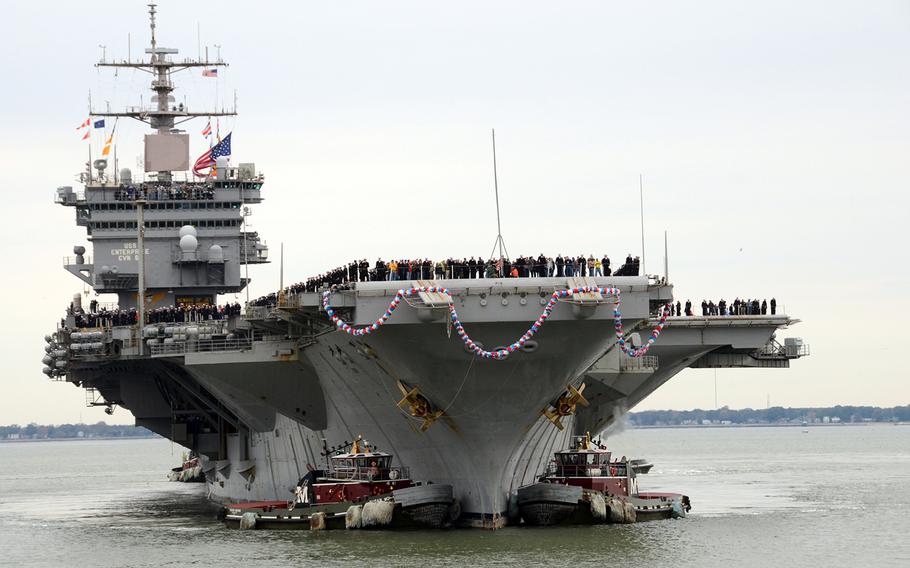 The aircraft carrier USS Enterprise (CVN 65) arrives at Naval Station Norfolk, Va., on Nov. 4, 2012. The Enterprise's return to Norfolk was the 25th and final homecoming of her 51 years of service. (Rafael Martie/US Navy)

WASHINGTON — It could cost more than $1 billion to dismantle the Navy’s first nuclear-powered aircraft carrier, the former USS Enterprise, according to the Government Accountability Office, an investigative arm for Congress that routinely reviews U.S. agencies and programs.

The GAO estimate was unveiled as the Navy is assessing its options to dismantle and dispose of the carrier, which has been inactive since 2012 and was decommissioned in 2017 after more than 50 years of service.

The carrier’s “dismantlement and disposal will set precedents for processes and oversight that may inform future aircraft carrier dismantlement decisions,” the GAO report said in a 56-page report released Thursday.

The GAO wrote it found the Navy’s typical budget and reporting on the effort doesn’t give enough information to support oversight for a project of this size and cost. A Senate report accompanying the National Defense Authorization Act for fiscal year 2018 included a provision for the GAO to review the Navy’s plans for the former carrier.

In its report, the GAO made four recommendations, including the Navy take action to provide additional budget information and reporting to facilitate improved transparency and accountability. It also recommended the Navy obtain an independent cost estimate, complete a risk management assessment prior to the beginning of the project and approve a cost and schedule plan.

The Defense Department agreed with all four recommendations.

“I would like to commend the GAO in the thoroughness of this review,” Kevin Fahey, the assistant secretary of defense for acquisition, wrote in a July 19 letter in response to the report. “This is a complex topic that has not been previously addressed.”

Among its options, the Navy could go the commercial industry route to dismantle and dispose of the carrier, which could be beneficial for the service, according to the GAO. However, the Navy and the Nuclear Regulatory Commission, which oversees the commercial nuclear industry, have yet to coordinate to fully explore the option, the agency said in its report.

GAO wrote in the report that lawmakers should consider legislative action that would require the coordination.

“Coordination between the two agencies … would help ensure accountability, solidify cost estimates, and facilitate” a decision, the GAO said. “We suggested that Congress consider action to resolve this.”

The carrier was deployed during the Cuban missile crisis in 1962 and saw action in conflicts ranging from Vietnam War to the war in Afghanistan. It made its final port stop in Naples, Italy in 2012 before setting sail for its home port, Norfolk, Va., to be broken down.

“This ship has served its time,” then-Rear Adm. Walter Carter, commander of the Enterprise Carrier Strike Group, told Stars and Stripes at the time. “It’s time to retire.”