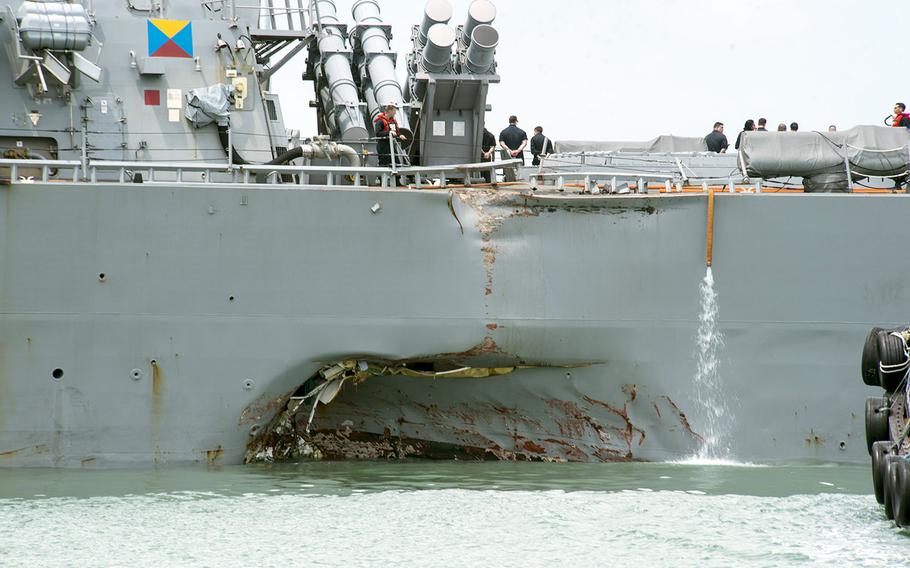 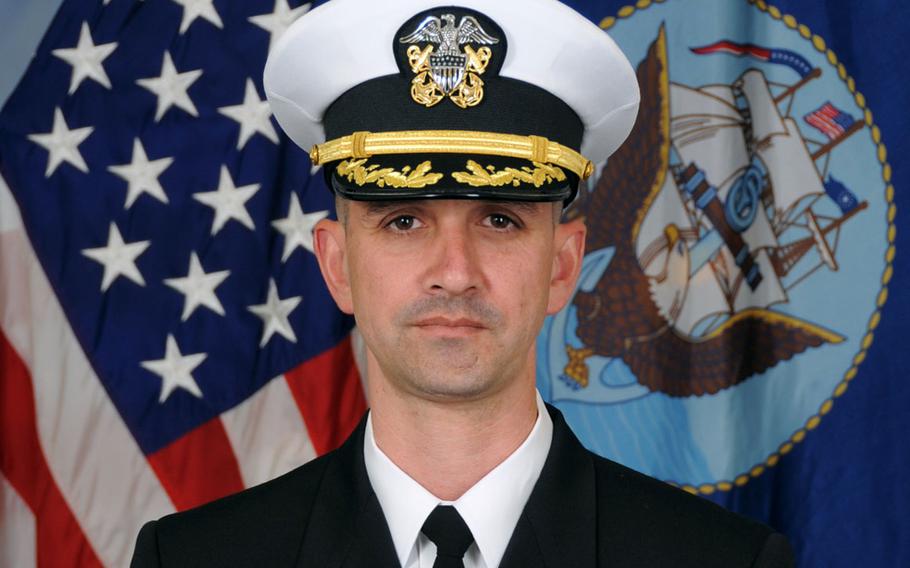 NOTE: This story has been updated to add sentencing information.

WASHINGTON — The commander of the USS John S. McCain when it collided with a commercial tanker last year in the Straits of Singapore pleaded guilty Friday to dereliction of duty and acknowledged his role in the deaths of 10 sailors.

Cmdr. Alfredo Sanchez appeared somber and tearful during a special court-martial at the Washington Navy Yard for the criminal charge under the Uniform Code of Military Justice. Sanchez pleaded guilty as part of an agreement and was sentenced to a letter of reprimand and forfeiture of $6,000 in wages.

Sanchez, who has spent more than 20 years in the service, said he will retire as part of the agreement.

“I am ultimately responsible and stand accountable,” he told the court. “I will forever question my decisions that contributed to this tragic event.”

Sanchez and other witnesses recounted the chaos and confusion that dominated the bridge in the moments leading up to 3-minute sequence of events that resulted in the deadly Aug. 21 crash.

Sanchez said he had not ordered the necessary detail to handle some of the busiest waters in the world until it was too late. Earlier, he had sent that overworked crew to catch up on sleep, his lawyer said.

“I failed to set a sea and anchor crew” before entering the Straits of Singapore, Sanchez said.

Sanchez said in the confusion, he thought the ship had lost steering control, when it had not. This, as the crew did not know how to properly use the McCain’s navigational system.

On Thursday, a chief who was charged with training and use of the navigational system on the McCain pleaded guilty to dereliction of duty and as a result was demoted in rank. Chief Petty Officer Jeffery D. Butler said he had never been formally trained on the Integrated Bridge and Navigation System and the McCain was the only ship in the 7th Fleet with the advanced system.

“That seems to me the single overarching failure is understanding how the console operates,” Cmdr. Charles Purnell, the Navy judge presiding over Friday’s court-martial, told Sanchez.

Sanchez said while a combination of factors contributed to the crash, he should have directed more rigorous training of the system.

Also, Sanchez said he took control of the ship when it was too late. In the dark waters, the McCain’s officer on deck issued orders that later fell to a young helmsman.

His lawyer, Cmdr. Stuart Kirkby, said after Friday’s hearing those words highlight an urgent concern for the Navy.

“One of the things that is lost in many of these proceedings is we’ve got 18-year-old sailors, 19 year-old, 20 year-old …kids who are driving these ships,” Kirkby said. “They have a limited amount of training and experience.”

More than a dozen relatives of the McCain’s fallen sailors attended Friday’s hearing, and they addressed the court through a series of searing and emotional victim impact statements. Many spoke through tears of paralyzing grief and lingering questions of their loved ones final moments.

Karen Doyon, mother of Petty Officer 3rd Class Dustin Doyon, 26, of Connecticut, said she often thinks of her son struggling for air, his lungs filling with diesel fuel and saltwater.

“I am haunted by it every day,” Doyon said. “This is a tragedy that should have never happened.”

More than a half-dozen impact statements were read for Petty Officer 2nd Class Kevin Sayer Bushell, 26, of Maryland as relatives recounted his love of animals, nature and adventure. Some said Sanchez and the Navy cut corners that cost lives.

“I lost my beautiful son because of the Navy,” mother Karen Bushell said in a statement.

“The world will never know what greatness he could have achieved,” said father Thomas Bushell. “Ignorance and arrogance sent these fine sailors to their watery graves.”

“I kept him alive for 23 years,” Palmer said. “You took possession for three months and failed.”

In addressing the court, Sanchez told the families that although he can not bring the fallen back, he hoped Friday’s hearing would bring some closure. Kirkby said his client’s role in the crash is just one piece of a larger problem.

“I’m not here to say Cmdr. Sanchez didn’t do this… he’s cooperating, he’s taking responsibility,” Kirkby told the court. “We join the families in asking this not be the end of the proceedings” and more be done by Congress and others to address the failures of last year’s Navy ship crashes.

Kirkby added that more did not perish because of the actions Sanchez took and his crew’s quick orders to seal off the flooding.

Late last year, Sanchez faced punishment through a non-judicial proceeding known as an admiral’s mast in which he received a letter of reprimand and surrendered nearly $5,000 in wages. Those efforts will be credited towards Friday’s sentencing terms, the judge said.

In January, Navy officials said Sanchez had been charged with negligent homicide, dereliction of duty and hazarding a vessel.

“He negligently failed to ensure the safe navigation of the said vessel,” the charge sheet said, “as it was his duty to do as Commanding Officer to ensure a proper watch was set for transiting a high-density contact environment; take proper action and control of the vessel during system casualty; follow operational Standing Orders during a conceived system casualty, and that such dereliction of duty contributing to the death” of the 10 sailors.

Wednesday’s details didn’t mention the homicide charge or hazarding a vessel. On Friday, Navy prosecutors confirmed that those charges were withdrawn as part of the pretrial agreement, which was reached behind closed doors in April.

Sanchez will now face a “retirement grade determination,” where he could be retired at a lower rank than commander, his lawyer said.

At the closing of Friday’s hearing, Purnell told the families that their anger came through loudly and eloquently. He encouraged Sanchez not to give up in his future endeavors.