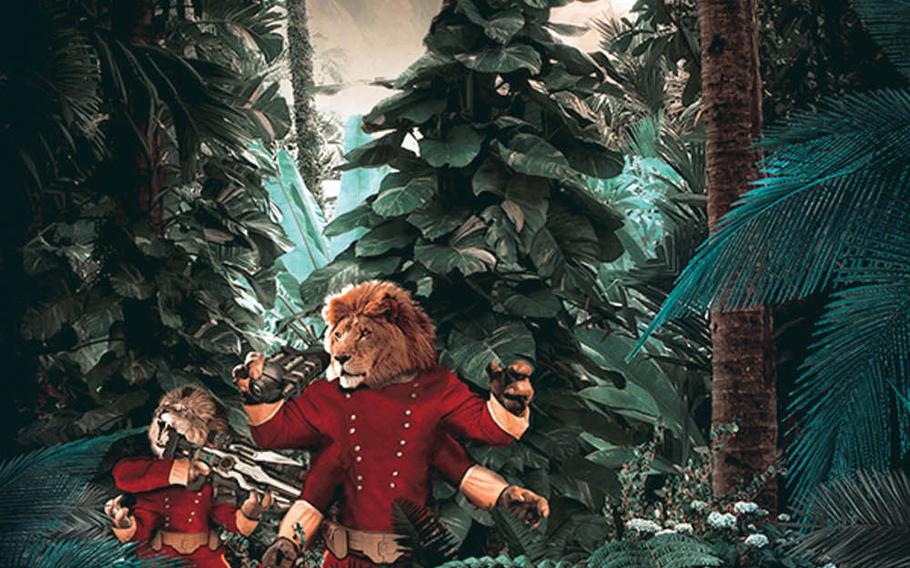 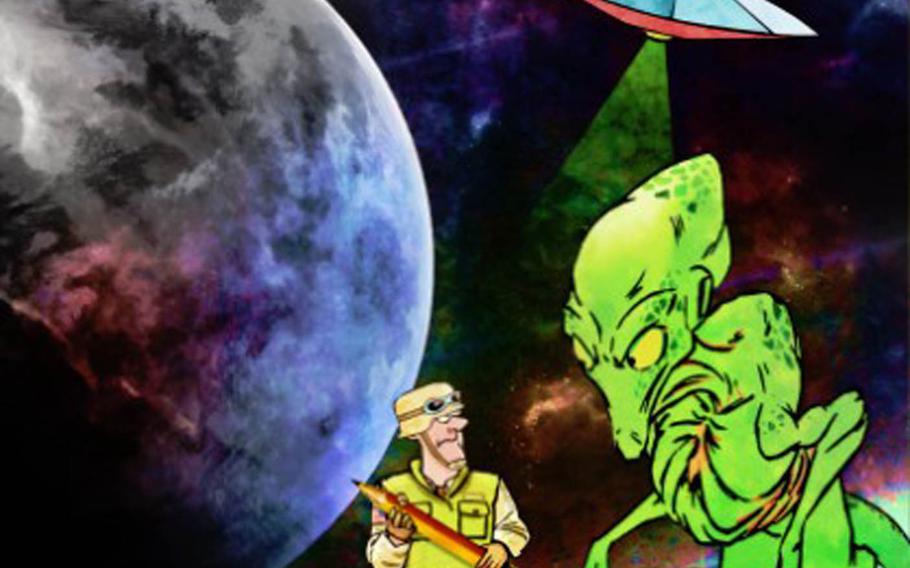 (Illustration by Noga Ami-rav/Stars and Stripes)

Lasers blast, starships explode and alien lizards clash with cyborgs in a battle for the future that shows no signs of ending, thanks to an army of former troops building second careers in military science fiction.

It’s a field that’s custom-made for men and women exposed to cutting-edge military technology — ground robots, battlefield computers, lasers and drone aircraft — and experience in combat in places like Iraq and Afghanistan.

They’re following in some distinguished footsteps.

Robert Heinlein, author of numerous sci-fi classics, including “Starship Troopers,” graduated from the Naval Academy and served on America’s first modern aircraft carrier, the USS Lexington, in the 1930s. He started writing to make ends meet after he was medically discharged.

Kurt Vonnegut, an Army intelligence scout with the 106th Infantry Division, was captured by the Germans during World War II and survived the firebombing of Dresden — which killed tens of thousands of civilians — by taking refuge in an underground meat locker. The experience led to his sci-fi masterpiece “Slaughterhouse-Five.”

While the works of Heinlein and Vonnegut draw heavily on the authors’ military experience, the fathers of the “military sci-fi” genre are Jerry Pournelle, a Korean War veteran, and David Drake, who served in Vietnam, according to Toni Weisskopf, an editor at science fiction publisher Baen Books.

“It’s something they (ex-servicemembers) understand, and they do it really well,” said Weisskopf, who has been editing science fiction for three decades.

Many of the authors who she edits these days are veterans of 21st-century conflicts.

“It’s the modern military experience that is informing the sci-fi that people are writing today,” she said.

For example the work of Tom Kratman, who retired from the U.S. Army in 2006, reflects current events. His novel “Caliphate” depicts a future where Europe has been taken over by a brutal Islamic regime.

Science fiction, said Weisskopf, lets former servicemembers write about their experiences in ways that they couldn’t do in other forms of fiction.

“Writers get to make things come out the way they want them to and not the way they actually came out,” she added. “It also brings military culture to a broader audience beyond people who have served and their dependents. It bridges the gap between the military and civilian cultures.”

David Guenther, who retired to Surprise, Ariz., near Luke Air Force Base, started writing sci-fi after he retired in 2003 after 21 years in the Air Force managing life-support equipment on almost every aircraft in the fleet, from C-5 transports to F-16 fighters and B-52 bombers.

“When I was in the service, I liked to tell stories,” Guenther said. “I would keep making them more and more unbelievable. It just seemed to be a transition for me in the civilian world to put it on paper.”

He has authored a series of “Gray Panthers” books about a war between aliens and elderly ex-soldiers who have had their youth restored with extraterrestrial technology.

A veteran of postings to Britain and Korea and several deployments to the Middle East, Guenther said his missions and the foreign cultures he’s experienced inspire his work.

“Instead of airplanes, I just make them spaceships,” he said.

Guenther compared being stationed in Korea with being on another planet or in another dimension.

At Kunsan Air Base, for example, the flightline was separated from the seashore by barbed wire and a minefield.

“If any rocks were knocked out of the rock wall on the seashore, the base would go on alert,” he said.

Fellow sci-fi author and military veteran Chris Kennedy, of Virginia Beach, Va., served 20 years in the Navy, first as a bombardier on A-6 Intruder aircraft and later on EP-3 reconnaissance planes.

Kennedy was stationed in Rota, Spain, and did deployments to Kosovo and Iraq before retiring in 2007.

Three years ago, he was driving home from work — he’s still a Navy contractor — when he got an idea for a story about a Chinese invasion of the West Coast.

When he got home, he started writing and ended up self-publishing “Red Tide” as an e-book. It was popular enough to inspire a sequel. By the time he got to the third book in what is turning into a nine-part series, his characters had encountered aliens and were fighting battles in space, he said, adding that the series has sold 50,000 copies so far.

“The military set me up to be a sci-fi writer,” Kennedy said. “Most of my work is heavily military-based. My military background helped me get into the head of the different characters. I know what it is like to be in these things and have friends who I can talk to who have done everything that I haven’t done. I try to make it as real as possible so you are feeling what people in combat feel.”

Some of his characters — whom he called “redshirts” after the crewmen on “Star Trek’s” Starship Enterprise destined to die soon after they beam down to a planet — are based on real people with whom he’s served.

“When people want to be in my books, I create characters with their names and kill them off,” he said. “They are definitely going to die because they are redshirts, but they get to do something heroic. In the last book I killed off 25 redshirts.”

Kennedy is also a fan of Ringo: “He writes about the real grittiness of war.”

The pair have met up a couple of times at sci-fi conventions. They often share the limelight with video-game developers and filmmakers, which suits Kennedy, whose son is studying video-game design at college.

“I’d love to see my books made into films or video games,” he said.

Mike Williamson, whose sci-fi books are published by Baen, served five years in the Air Force, including tours in support of Iraqi Freedom, and also did time in the Army and Air Force national guards.

Before he was a writer, Williamson was an avid reader of sci-fi books that he discovered on sale in the Base Exchange.

He wrote “Freehold,” a military-political sci-fi novel, in 2002 and developed a full-time writing career with 15 books — 12 sci-fi and three military fiction — that have yielded a half a million in sales and several best-sellers.

“I wrote half a book — ‘Contact with Chaos’ — about aliens while I was deployed to Kuwait for 4½ months. We were pulling 12- to 16-hour shifts so making the time go by wasn’t a problem, but it did help keep me sane,” he said.

Williamson’s best seller is 2006’s “The Weapon” about future special operations. Last year, he released “A Long Time Until Now” about a military convoy that gets thrown back in time to the Paleolithic age.

“The soldiers have to survive amongst ancient people and other people thrown back in time,” he said.

Experience gives the veterans an edge over other military sci-fi writers, he said.

“When non-military people try to write military stuff, it’s too clean. Everything works the way it’s supposed to whereas in the military you learn that things break for no reason, there are rules of engagement and budget constraints. It’s a convoluted process,” Williamson said.

He bases some of his characters on people from other cultures whom he encountered during his military career but doesn’t use many of the military experiences since he was involved repairing air conditioners, which he doesn’t rate as exciting enough for his stories.

Instead, he stays on top of current events and keeps in touch with friends in the special operations community to get inspiration, he said.

Another Baen author, Joelle Presby, 35, of Norfolk, Va., served in the Navy at Yokosuka, Japan, before she started writing.

“I always wanted to be a writer,” she said, adding that she was following in Heinlein’s footsteps when she joined the Navy.

Her book, “The Road to Hell,” is part of a series that deals with portals linking different dimensions and a war involving a group of magic users fighting people equipped with steampunk technology.

Presby’s world is also filled with telepathic animals such as whales and monkeys that are as smart as people and get involved in the battles, she said.

The book she’s working on now, about a space elevator in Africa, draws a lot on her time in the Navy.

“None of us have been in the space Navy or been involved in blowing up a spaceship, but we can write about some of the interesting things that we learn about people working together and leadership,” she said.