For US military, Mosul is familiar territory where American blood was shed 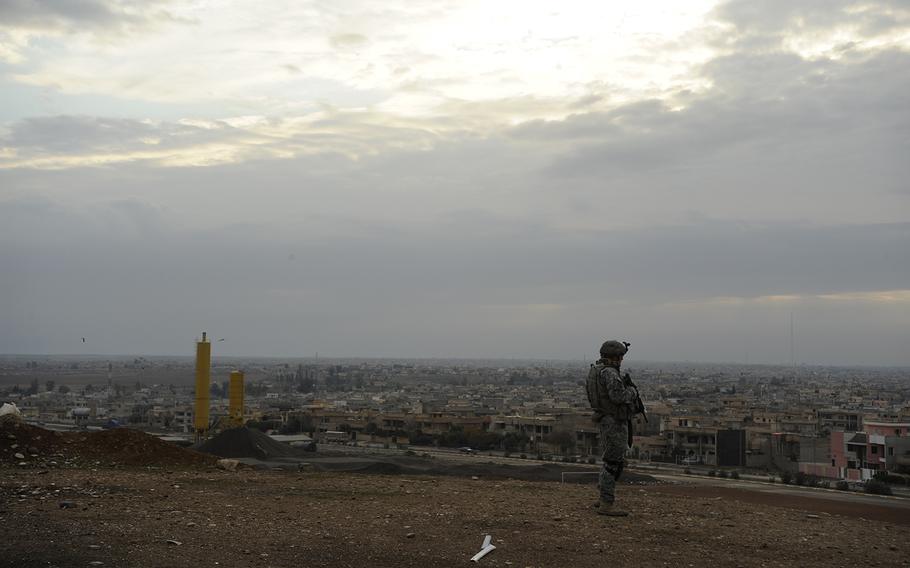 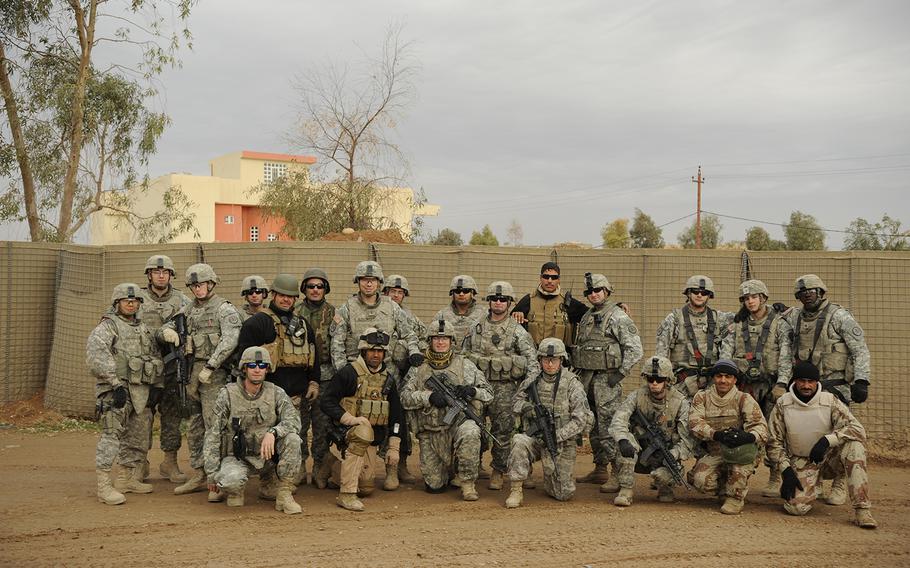 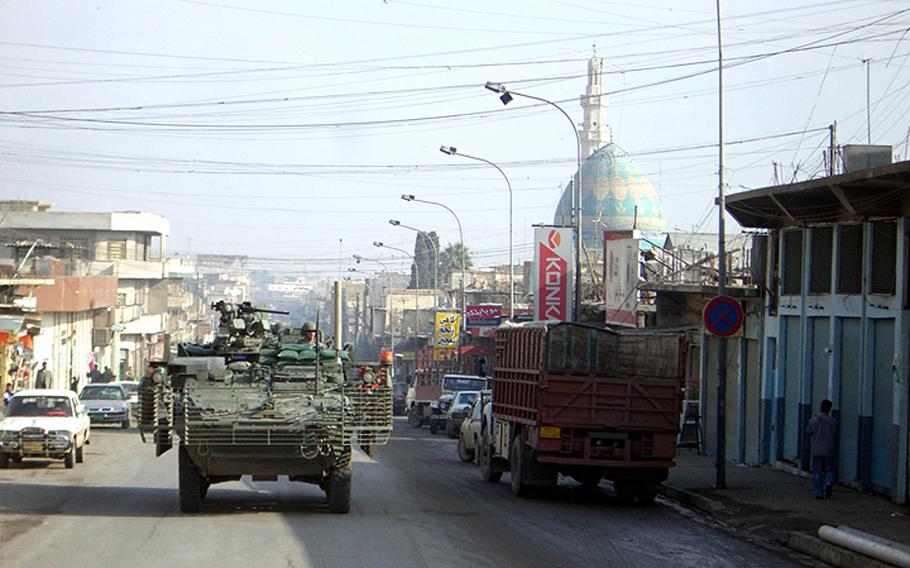 Strykers on Patrol in Mosul, Iraq, with the "Easter Egg" mosque in the background in Jan. 2006. (Thomas Kurtz/U.S. Army) 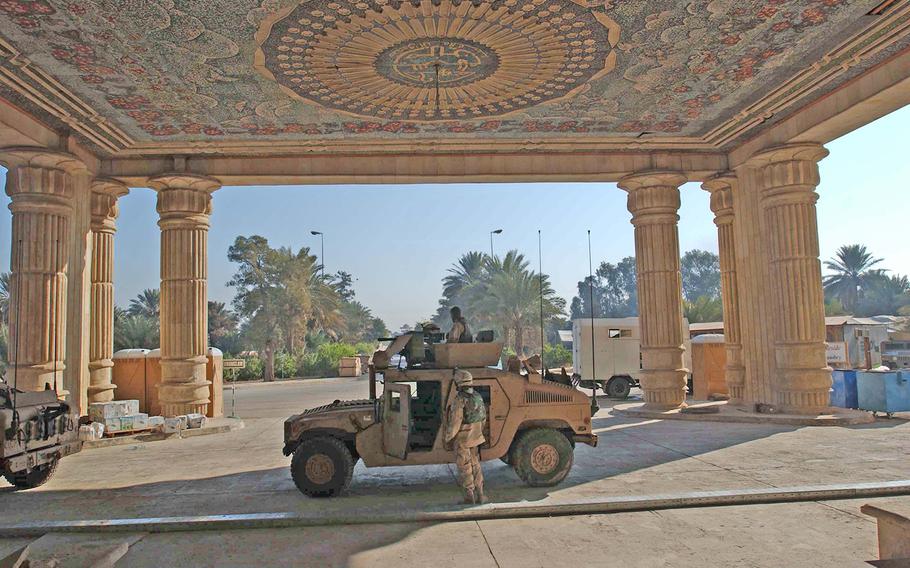 The U.S.-backed Iraqi offensive in Mosul brings the war to a city that is familiar territory for thousands of U.S. troops and veterans, a place where American blood was shed in the 2003-2011 Iraq War.

Here are the highlights of the U.S. military’s role in Mosul, Iraq’s second largest city and the last major Islamic State stronghold in the country.

The first fall of Mosul Before the U.S.-led coalition invaded Saddam Hussein’s Iraq in March 2003, the Pentagon planned to strike south from Turkey to seize Mosul and overrun northern Iraq. But the Turkish parliament refused permission to use its territory for the ground attack and the plan was scrapped. Mosul fell on April 11, 2003, when the Iraqi Army abandoned the city two days after the fall of Baghdad. U.S. Special Forces soldiers and Kurdish peshmerga fighters entered the city and restored order following widespread looting.

Saddam’s sons, grandson killed After the invasion, Saddam and his sons Uday and Qusay went into hiding. The U.S. offered $15 million bounty for information leading to the capture of each son. An informant told U.S. special operators where the two brothers were hiding in a Mosul residential neighborhood. U.S. special operators and troops from the 101st Airborne Division stormed the house on July 22, 2003. In a fierce gun battle, both sons were killed, along with Qusay’s 14-year-old son.

Deadly helicopter crash On the night of Nov. 15, 2003, two UH-60 Black Hawk helicopters collided over Mosul and crashed, killing 17 troops from the 101st Airborne and injuring five. An Army investigation determined that a rocket-propelled grenade struck one of the helicopters, forcing it into the path of the other. At the time, it was the heaviest loss of American life in a single incident since the Iraq invasion began eight months earlier.

Mosul uprising of 2004 In early November 2004, hundreds of insurgents flooded into Mosul, triggering an uprising as a diversionary attack to draw away U.S. military assets from the U.S. assault on Fallujah. Over the next week, insurgents seized one of five bridges over the Tigris River, attacked numerous police stations and overran nearly two-thirds of the city. U.S. troops, some of whom were rushed back from Fallujah, managed to regain control in days of heavy fighting after nearly 5,000 members of the U.S.-backed Iraqi security force deserted. About 200 people were killed in street fighting, including four American soldiers.

FOB Marez attack On Dec. 21, 2004, 14 U.S. soldiers, four American contractors working for Halliburton and four Iraqi soldiers were killed when a suicide bomber in an Iraqi uniform detonated an explosive vest in a dining facility at Forward Operating Base Marez, next to the U.S. military airfield in Mosul. An additional 72 people were wounded. The Islamist group Ansar al-Sunnah claimed responsibility in an Internet posting.

Battle of Mosul 2008 By early 2008 Mosul was considered the last major urban stronghold for the predecessor of the Islamic State group – known then as al-Qaida in Iraq. About 2,000 AQI fighters were holed up in the city, mostly in the Sunni neighborhoods in the west. After weeks of fighting in and around Mosul, a U.S.-backed Iraqi force launched Operation Lion’s Roar on May 10, rounding up hundreds of people and staging raids. On June 27 U.S. troops killed the leader of al-Qaida in the city, Abu Khalaf, in an hourslong gun battle. During seven months of fighting, the U.S. suffered 17 deaths, while Iraqi government deaths were 320, including pro-government troops and militiamen. Al-Qaida in Iraq suffered a significant defeat with 224 fighters killed and 1,480 captured. The campaign marked the effective end of al-Qaida in Iraq control of Mosul until the city was overrun by the rebranded Islamic State group in June 2014.