For the parents of the fallen, a war that never ends A battlefield cross stands in the yard of Jerry and Becky Brown, whose son, Army Staff Sgt. Daniel Brown, was killed by a roadside bomb in Afghanistan on March 24, 2012. The cross elicits little attention in the suburban subdivision where they live in Twin Falls, Idaho. (Martin Kuz/Stars and Stripes)

A battlefield cross stands in the yard of Jerry and Becky Brown, whose son, Army Staff Sgt. Daniel Brown, was killed by a roadside bomb in Afghanistan on March 24, 2012. The cross elicits little attention in the suburban subdivision where they live in Twin Falls, Idaho. (Martin Kuz/Stars and Stripes) Jerry Brown holds a photo of his son, Staff Sgt. Daniel Brown, who was killed by a roadside bomb in Afghanistan on March 24, 2012. At left, a photo shows Dan's twin daughters, born three months before his death, and whom he never met. (Martin Kuz/Stars and Stripes) 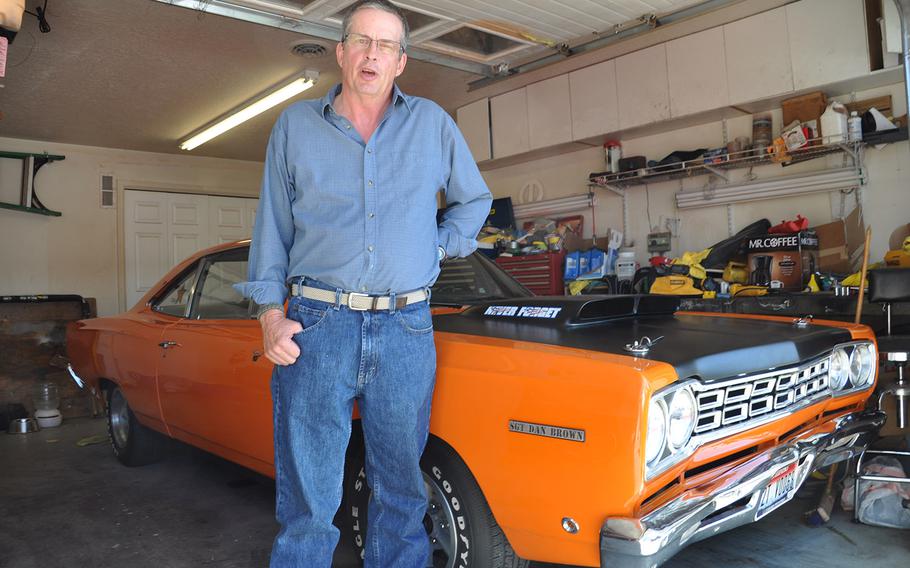 A 1968 Plymouth Roadrunner that Jerry Brown restored bears the name of his late son, Dan Brown, who was killed two years ago in Afghanistan. "I know the pain is never going to go away," Jerry said. (Martin Kuz/Stars and Stripes) 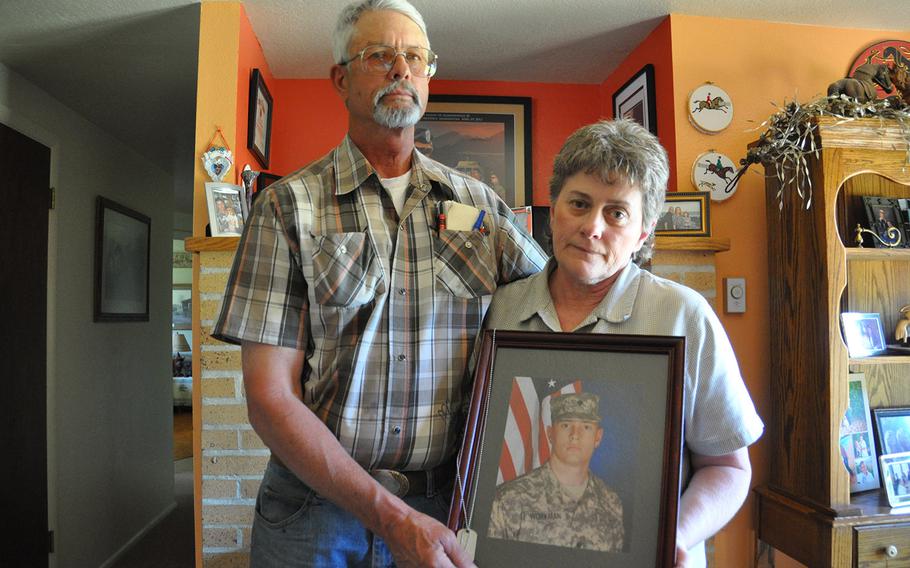 John and Anna Workman's youngest son, Sgt. Chris Workman, died in a helicopter crash in southern Afghanistan on April 19, 2012. "My fear is that the Afghan troops will just give the country back to the Taliban," John said. (Martin Kuz/Stars and Stripes) John Workman wears a memorial bracelet in honor of his late son, Sgt. Chris Workman, who died at age 33 in a helicopter crash in southern Afghanistan on April 19, 2012. (Martin Kuz/Stars and Stripes)

TWIN FALLS, Idaho — A battlefield cross stands in an oval flower bed in the trim front yard of Jerry and Becky Brown’s home. A soldier’s helmet rests atop a replica of an M-16 rifle pointed straight down between a pair of unlaced combat boots. Hanging on a chain from the rifle’s grip is a dog tag engraved with the name of the couple’s dead son.

Jerry built the memorial to honor Dan Brown, who was 27 when a roadside bomb killed him in Afghanistan on March 24, 2012. The staff sergeant died a month before his Army unit returned home and three months after the birth of his twin daughters. They will never know their father’s embrace.

The cross elicits little attention in this suburban subdivision of white houses and green lawns. Drivers roll past the Browns’ corner lot without slowing. Joggers lope by without breaking stride.

The tableau captures the invisible nature of the longest war in America’s history. A conflict that began in 2001 is not gone but forgotten, shunted to the periphery of public consciousness even before most of the residual U.S. forces leave by year’s end.

There are exceptions. For mothers and fathers who lost sons and daughters to Afghanistan, the war remains as vivid and intimate as the day it created a lasting void in their lives. They hold tight to the pride they feel in their children’s service. But as the U.S. military withdraws and concerns persist of Afghanistan reverting to civil war, parents of fallen soldiers struggle with a barbed question: For what larger reason did their child die?

“I assume once we pull out, the country is going to go back to the same way it was before,” Jerry said. The scenario of collapse has played out in recent weeks in Iraq, where Dan deployed in 2005 and U.S. troops departed three years ago. “If that happens, that will be hard to take. A lot of lives ended there, not only his.”

‘Totally wrong’ In their living room, the Browns have arranged a cluster of photos, plaques and medals in their oldest son’s memory, the artifacts of bereavement. A similar shrine in the home of John and Anna Workman honors their youngest son. Sgt. Chris Workman, 33, and three fellow crew members died in a helicopter crash in southern Afghanistan on April 19, 2012, less than a month after Dan Brown’s death.

“He loved the Army, and he loved being there,” said Anna, who lives with John on their ranch in Rupert, an hour’s drive from Twin Falls. “He felt like they were helping, like they were making a difference.”

Such conviction has eluded his parents amid the looming prospect of Afghanistan unraveling like Iraq. The certainty of his absence contrasts with the political instability of the place where he took his last breath.

“My fear is that the Afghan troops will just give the country back to the Taliban,” John said. He wears a black memorial bracelet inscribed with his son’s name and date of death, a death in a war that he believes was misguided, then mishandled. “It was totally wrong to go into Afghanistan, looking back on it,” he said. “But once we went, if we had just sent the military in with a clear objective and 100 percent of the resources they needed, they could have gone over, cleaned house and been done with it.”

Last year, in a Memorial Day column for the local newspaper, Anna wrote of her ambivalence about the war’s purpose. “As the flags line the streets and towns, I flash back to our time of sorrow as we buried the remains of our boy. I wonder in 50 years who will know or even care, or if his sacrifice made one drop of difference.”

She believes the same doubts burden returning troops, contributing to the high rate of post-traumatic stress disorder and depression among them. “I think our soldiers are coming back so confused and emotionally upset because they don’t know what the point is of what we’re doing over there,” she said.

Chris enlisted in 2008 at the relatively late age of 29, after shelving his military ambitions for a decade. His parents had insisted he attend college, and with a business degree from Idaho State, he worked in real estate for a few years until the recession hit. His deferred dream was realized when he deployed, yet Anna’s anxiety over his safety tempered her happiness for him.

“I was so fearful that the worst could happen, and when you’re consumed with fear, you forget to say things. You’re telling him ‘Be careful’ instead of ‘I’m proud of you.’” She began to cry. John placed a hand on her shoulder and spoke in a low voice. “He knew how you felt. He knew.”

America’s apathy Iraq’s implosion has drawn more media coverage than anything related to Afghanistan this year except the saga of Sgt. Bowe Bergdahl.

The Idaho native spent five years as a prisoner of war in eastern Afghanistan before his release in May. His exchange for five Taliban detainees, coupled with accusations by members of his platoon that he deserted, whipped up a national frothing.

The renewed turmoil in Iraq has disillusioned Jerry and Becky Brown about Afghanistan’s future. The Bergdahl uproar has deepened their frustration over America’s apathy. They want the loss of their soldier-son, and that of thousands of other servicemembers, to provoke a public reaction of equal fervor.

“What’s hard is, look at how much news there’s been about Bergdahl,” Becky said, “and then compare that to all the soldiers like Dan who gave up their lives. You hear about them for a couple of days, and then nothing.”

Several members of their son’s platoon told the Browns that he directed them to stay back before he walked toward a roadside bomb that had been discovered in a village in Kandahar province. The order spared them his fate. “People say, ‘You should be proud,’” Becky said. “I am proud, immensely proud. But we wish everyone knew about Dan’s life.”

George and Julia Cochran share that desire for their son. Lance Cpl. Ken Cochran, 20, was electrocuted while refueling a generator on a base in southern Afghanistan on Jan. 15, 2012. The second youngest of four siblings, he joined the Marines after high school, inspired by his father, a onetime Leatherneck who served in Vietnam.

“I was mad when Ken died,” said Julia, a retired Army captain who deployed to Iraq in 2009. “I thought the whole world should stop and everyone should take a moment and say, ‘This good kid — this nice, fabulous, all-American kid — is dead.’ And they didn’t.”

The couple lives outside Boise in the town of Wilder, where Ken grew up riding dirt bikes and shadowing George in his metal shop. If their anger has subsided by degrees, they still yearn for the country to reciprocate his devotion.

“I think his death was a noble sacrifice,” Julia said. “I just would like for people to take the time to understand that sacrifice.”

‘We got you’ Jerry Brown sustains his son’s memory with projects that could be called labors of loss. After finishing the battlefield cross in the front yard, he restored a 1968 Plymouth Roadrunner, affixing a fender badge that bears Dan’s name. Now he’s working on a 1972 El Camino, and he has received approval to a build a city park memorial for troops killed in Afghanistan and Iraq.

“My way of dealing with Dan’s death is not to deal with it, I guess,” he said. His son’s green camouflage field jacket draped the back of his chair as he and Becky sat at their kitchen table. “I know the pain is never going to go away.”

In the couple’s living room, a framed photo shows Dan’s twin daughters, Mattie and Marlee, who live with his widow nearby. The last time he spoke with his parents, a week before the blast that killed him, he fretted about supporting his children on an Army salary.

Her voice broke. Jerry hugged her close. They cried as one.