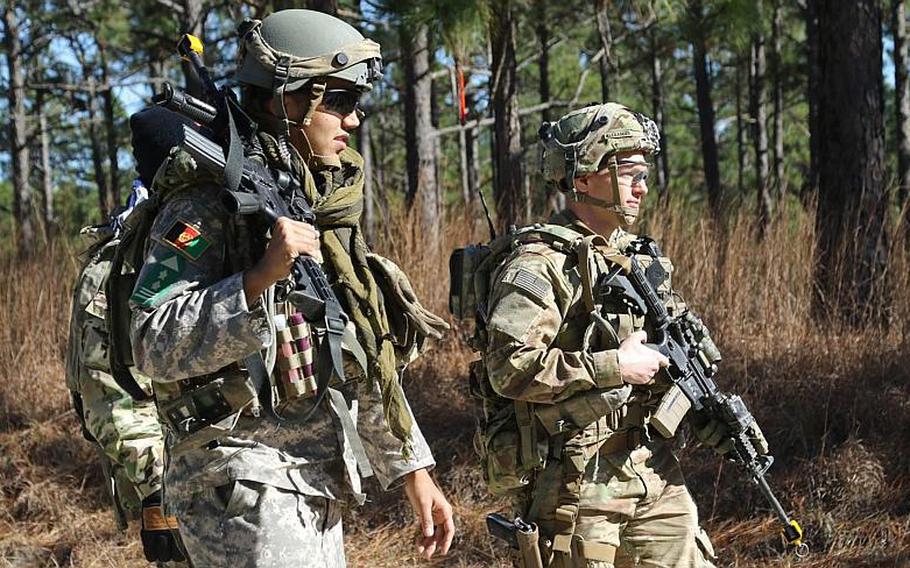 The 1st Security Forces Assistance Brigade — whose members will be dispersed at outposts throughout the country and be closer to the front lines of the war than most U.S. troops have been in years — is a key component of the Trump administration’s strategy for ending a stalemate with the Taliban.

Instead of advising high-ranking Afghan commanders, as is done now, the new brigade will work with battalion-level personnel. U.S. military officials in Afghanistan have often cited this as a vital, missing component of their advising efforts.

The 1st SFAB’s leadership has arrived in Kabul, according to a post Wednesday on the unit’s Facebook page, and was welcomed by Gen. John Nicholson, the top U.S. commander in Afghanistan. More than 800 members of the brigade will arrive over the coming weeks in preparation for the spring fighting season, which generally begins in early April.

The brigade will participate in NATO’s Resolute Support mission, which is focused on training, advising and assisting Afghan forces, and is separate from the U.S. counterterrorism mission in the country.

Historically, conventional Army units have been used in an ad hoc fashion to advise and assist forces in Afghanistan and other theaters. The new SFABs, trained specifically for combat advising, are intended to make advisory more effective and efficient.

From World War II to Vietnam and Korea, the Army has carried out advise-and-assist missions to help allies strengthen their forces. But with the current advising mission lasting longer, the Army has brought in the new, dedicated units.

The 1st SFAB, based at Fort Benning, Ga., and under the command of Col. Scott Jackson, is one of six planned SFAB brigades of roughly 1,000 soldiers each, which will be deployed worldwide.

The White House plans to increase the number of American troops in Afghanistan from 11,000 last summer to around 15,000 by spring.

After the new strategy was announced in August, the SFAB’s training was cut short significantly so that the unit would be able to deploy by spring, the New York Times reported. The move prompted questions as to whether the new brigade would be sufficiently prepared for the task.

The 1st SFAB is comprised of volunteers from across the Army, primarily non-commissioned and commissioned officers from regular units, who trained at the Military Adviser Training Academy in Fort Benning.

The unit was stood up in October. Earlier this month, the brigade’s colors were unveiled for the first time during an activation ceremony at the National Infantry Museum.