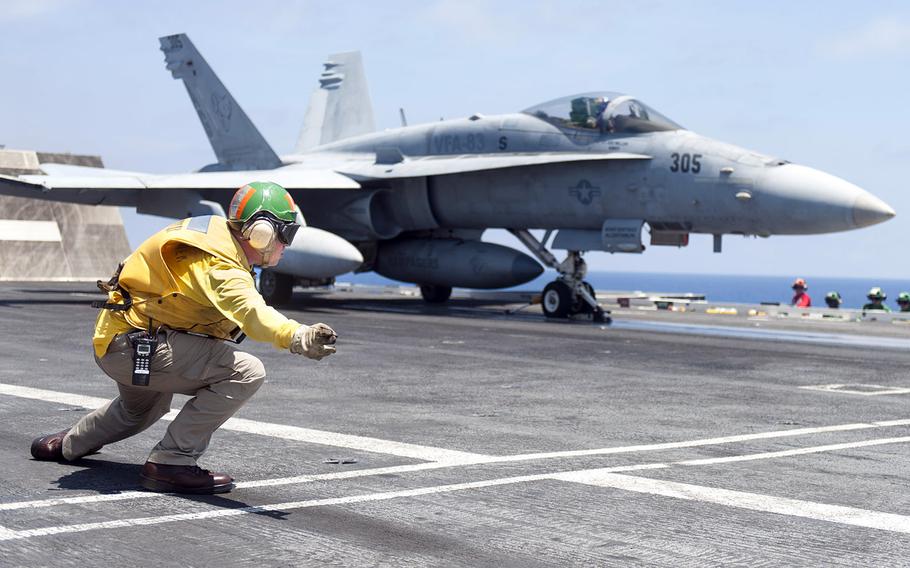 In a June 15, 2015 file photo, Lt. B. J. Burnham signals to launch an F/A-18C Hornet from the flight deck of aircraft carrier USS Harry S. Truman, off the east coast of the United States. (K. H. Anderson/U.S. Navy)

A Navy F/A-18C refueling aboard the USS Harry S. Truman caught fire late Tuesday, injuring the pilot and a sailor on deck, the Navy said Wednesday.

Naval Air Force Atlantic spokesman Cmdr. Mike Kafka said the cause of the fire and the pilot’s decision to eject will be part of the Navy’s investigation.

It’s the third mishap this week for military aviation. An Army UH-60 Black Hawk made a hard landing onto the USNS Red Cloud off Okinawa on Wednesday, injuring seven servicemembers. On Monday, an Air Force F-16 assigned to Spangdahlem Air Base crashed near Bayreuth, Germany. The pilot safely ejected in that crash and was treated for minor injuries.