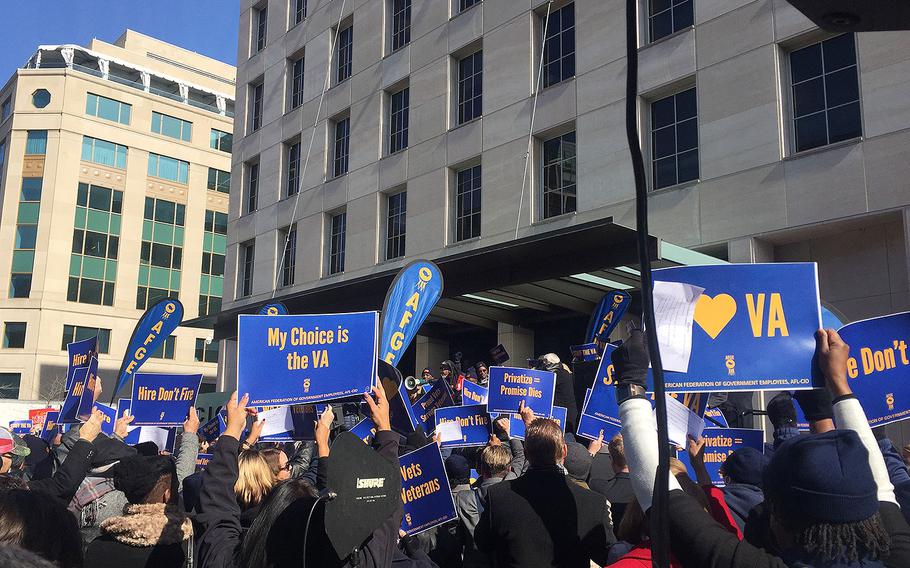 About 200 federal workers marched by Department of Veterans Affairs headquarters in Washington on Tuesday, Feb. 13, 2018, protesting staffing shortages and what they argued were attempts by President Donald Trump to dismantle the VA health care system. (Nikki Wentling/Stars and Stripes)

WASHINGTON — About 200 federal workers marched by Department of Veterans Affairs headquarters in Washington on Tuesday, protesting staffing shortages and what they argued were attempts by President Donald Trump to dismantle the VA health care system.

The crowd -- people shaking noisemakers or carrying signs that read, “Staff the VA” and “Hire, don’t fire” -- was organized by the American Federation of Government Employees, a union representing about 230,000 VA workers.

“We want to march on the VA,” said AFGE National President J. David Cox. “We want the secretary to hear our voices loud and clear.”

Their main point of contention was VA staffing shortages. As the crowd approached VA headquarters Tuesday afternoon, they faced the main entrance and shouted, “Staff the VA.”

The union has said over the last several months that the agency has 49,000 job vacancies, but the VA argues the true number is about 13,500 fewer than that.

As of Nov. 3, 2017, the VA had 35,554 unfilled full-time positions, said agency spokesman Curtis Cashour. He added that it was “significantly less than the 49,000 AFGE cites time and again.”

Weidman argued the shortages would lead to low morale and employee burnout.

“It’s burning out our best folks, and it’s unfair to them and unfair to the veterans,” Weidman said. “We need full staffing.”

In his State of the Union speech last month, Trump praised the bill and credited it with leading to the removal of 1,500 VA employees last year.

When the bill was mentioned Tuesday, the crowd of federal workers booed loudly.

“It’s perhaps the biggest trampling of civil-service protections we’ve seen in decades,” said Randy Erwin, leader of the National Federation of Federal Employees. “Now the White House and some in Congress want to make similar changes government-wide. To them I say, ‘Hell no.’”

The rally was part of AFGE’s “legislative week,” during which union members travel to Washington for workshops and events. It aligned with the release Monday of Trump’s 2019 budget proposal.

Though the union criticized Congress and Trump’s administration for not fully funding or staffing the VA, Trump’s requested VA budget for 2019 totals nearly $200 billion and would be another in a series of significant increases for the agency over the past decade.