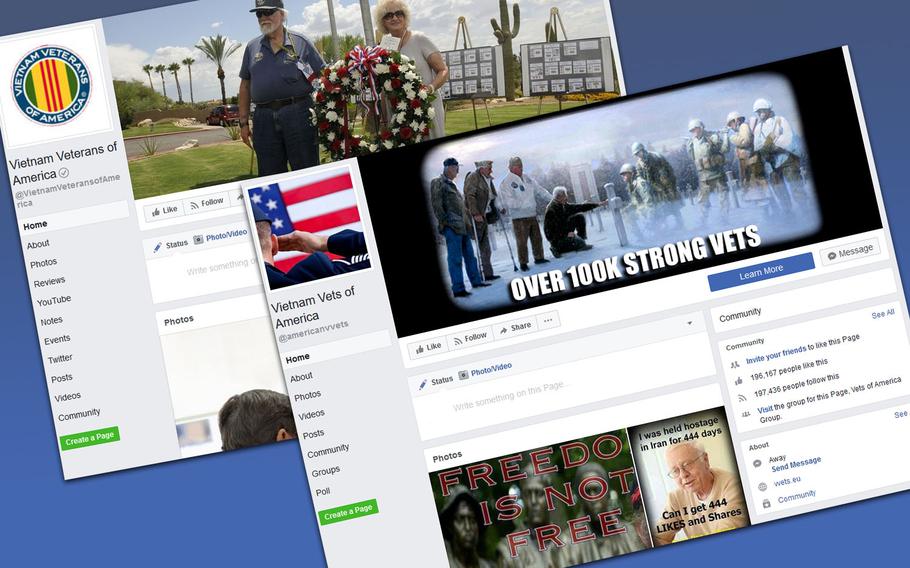 WASHINGTON – Facebook Inc. disabled a page on its social media platform Tuesday after determining it violated the intellectual property of a congressionally chartered veterans service organization.

The company shut down the page Vietnam Vets of America, which created politically divisive posts and had a following of nearly 200,000 people. That’s tens of thousands more than the number following Vietnam Veterans of America, a page run by the veterans service organization of the same name that accused the other page of being an “imposter.”

Vietnam Vets of America violated a section of the social media network’s Statement of Rights and Responsibilities about protecting other people’s rights, said a Facebook official who spoke on the condition of anonymity because the information had not been publicly released.

“We’re glad to see that Facebook is taking seriously the fact that agents outside the U.S. are targeting veterans on social media,” said John Rowan, president of Vietnam Veterans of America.

Rowan referred to a study from Oxford University published earlier this month that found Russian operatives used Twitter and Facebook to disseminate “junk news” to veterans and servicemembers, including propaganda, conspiracies and hyper-partisan political content.

It’s unclear who is behind the Vietnam Vets of America page, and requests for comment from page administrators went unanswered.

The veterans service organization responded by calling on the Departments of Defense and Department of Veterans Affairs to get involved in stopping foreign entities from targeting veterans and servicemembers online.

Since then, Facebook concluded an intellectual property complaint about the page was valid, the company official said.

Late Tuesday, VVA celebrated the decision to shut down the page but again called for the federal government to take action.

“We can’t afford to dedicate staff time and funds to play whack-a-troll on the internet to protect our members from deception,” Rowan said. “We’re encouraged by Facebook’s action this week but want to re-emphasize that we believe the VA and DOD have a role to play in protecting troops and veterans from influence and deception by foreign actors.”

Facebook, along with Twitter and Google, are expected to face questions on Capitol Hill next week about how Russia was able to use their platforms to intervene in the 2016 presidential election. Leaders of the social media networks were invited to publicly testify Nov. 1 before Senate and House intelligence committees.

In an interview with the news website Axios earlier this month, Facebook Chief Operating Officer Sheryl Sandberg said the social media network would be going after fake accounts, increasing transparency and hiring thousands of staff to improve oversight.