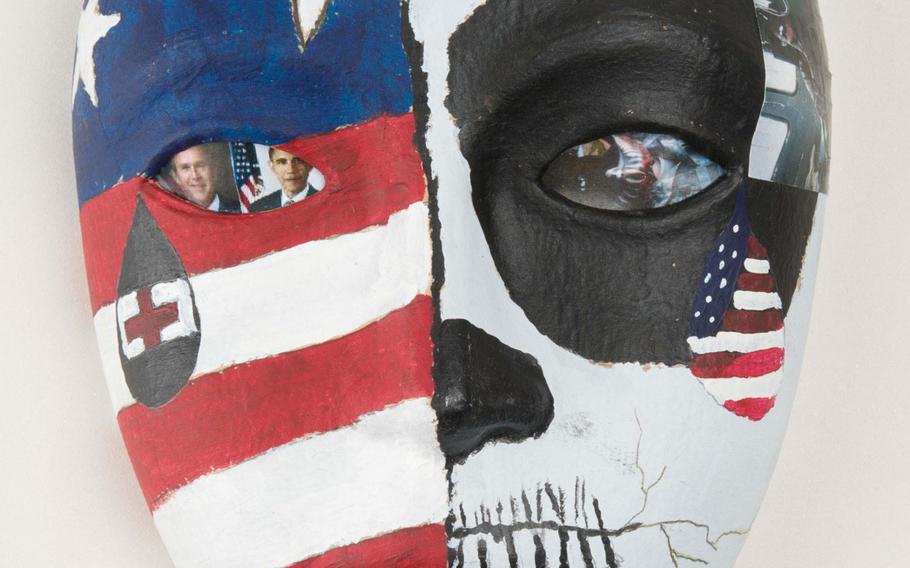 This mask was designed by an active-duty servicemember during art-therapy sessions at the National Intrepid Center of Excellence, Walter Reed National Military Medical Center. It is one work from a temporary exhibit of art-therapy masks on display at the National Museum of Health and Medicine, Silver Spring, Md., through September 2016. (Matthew Breitbart/National Museum of Health and Medicine)

But at the end of his presentation, part of an annual health summit Thursday and Friday, Hoge declared that research is needed on to get patients to stick with their therapy.

“I think treatment dropouts are still the most critical problem,” said Hoge, a leading expert on PTSD and a senior scientist at Walter Reed Army Institute of Research in Maryland.

Trauma-focused therapies, during which patients undergo prolonged exposure to thoughts and memories associated with a traumatic event, are now widely used to treat PTSD in active military, veteran and civilian patients, Hoge said.

“This is sort of the standard of care now for patients with PTSD, to utilize one of these types of treatments,” he said. “They are very effective. About 70 percent, plus or minus, of people recover if they stay in the treatment. But there’s a high percentage of people who drop out of the treatment.”

A course of treatment generally lasts about 12 sessions, although that varies.

In practice, however, less than 50 percent of people recover when they get care because, for one reason or another, some drop out.

“That may be because we’re not presenting the material in a way that’s comfortable to them,” he said. “It might be because they decided to prioritize their job over getting care. Or they had childcare concerns or transportation problems or felt that stigma was going to be a burden. “It’s an area where we need more research, to be sure.”

The Pacific Regional Behavioral Health Summit, now in its fifth year, aims to share best practices and information on many topics among professionals in DOD, VA and civilian healthcare systems.

PTSD affects people across all of society, but the post-9/11 wars brought the condition to the forefront for those who served in Iraq and Afghanistan.

The Department of Veterans Affairs estimates PTSD affects 11 percent to 20 percent of veterans of those two conflicts. It’s estimated to affect 30 percent of Vietnam War veterans.

People with PTSD may experience emotional numbness and loss of interest in things they used to enjoy. They can be easily startled, upset, irritated or act out aggressively. They often have trouble sleeping or getting to sleep.

Hoge said he and others in the PTSD treatment community have been challenged by a change several years ago to the definition of PTSD in the American Psychiatric Association’s Diagnostic and Statistical Manual of Mental Disorders. It lays out the characteristics or symptoms a patient must exhibit, which exclude some individuals who would have been determined to have PTSD under the old definition.

The new definition also has created a new group of people identified as having PTSD, but treatments for them have not been validated through trials, he said.

“The important thing, from my standpoint, is that we want to make sure people get the treatment they need, and we want to give them the diagnoses that’s going to support that treatment,” he said.

The DOD and VA are using the new definition, but Hoge said he would not hesitate to diagnose someone as having PTSD under the old guidelines. He called that a “reasonable” approach, even if it “may not be what some of our policy experts want us to do.”

The most successful trauma-focused therapies are those in which patients are exposed repetitively to the same cues that trigger their symptoms.

Hoge described this as “new learning that’s being overlaid on the fear condition.” The problem is that over time this fear “extinction learning” sometimes degrades, and some patients return months or years after successful treatment.

An emerging area of research focuses on how to permanently change a conditioned fear response in the brain, he said.

Experiments have found that during certain points of successful therapy, a “reconsolidation window” exists during which memory can actually be changed, he said.

“When memory becomes activated, we know that within the next hour or two — maybe as much as five hours — that memory can be reconsolidated,” he said. “But there’s a short window and then that window closes. It either gets consolidated in a new way or it gets reconsolidated in the way it was before.”

One therapy that could be promising in such permanent change is accelerated resolution therapy, or ART, he said. During ART, patients bring up the traumatic experience in their mind, during which they typically feel it manifest somewhere in their body — gut, chest, head.

“There are techniques to help them alleviate the sensations they’re having in their body, and once they have a more positive response in their body, then oftentimes they can go back to visualizing the traumatic experience without as much visceral response,” he said.

Although the patient logically knows that’s not how it really happened, at a neurological level in the limbic system – the part of the brain that supports emotions and long-term memory, among other basics – something changes and “people feel much better afterwards,” he said.