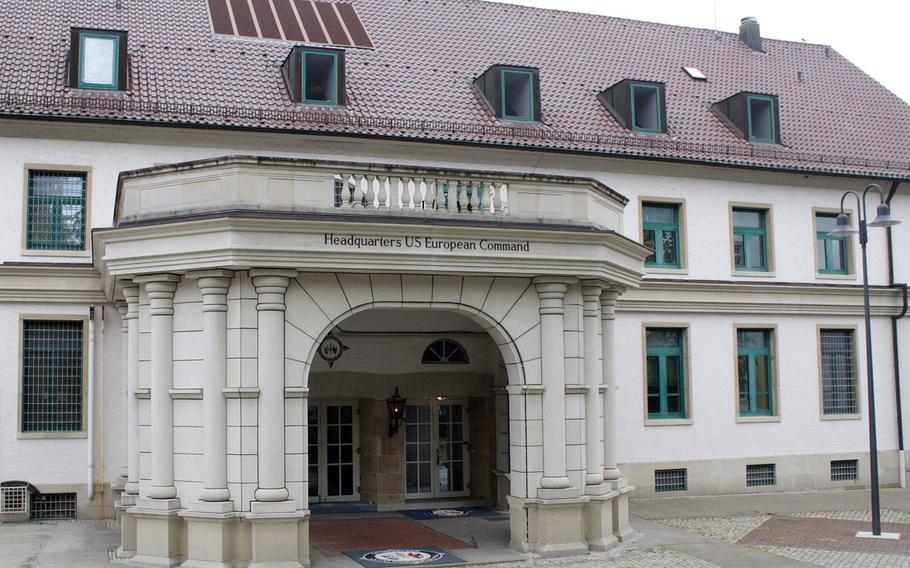 U.S. European Command headquarters at Stuttgart, Germany's Patch Barracks. Austere Challenge 2021, a classified drill that wrapped up Oct. 23, 2020, brought together some 4,400 troops from units across Europe, the U.S. and NATO to simulate how allies will respond in a war. (John Vandiver/Stars and Stripes)

STUTTGART, Germany — U.S. European Command wrapped up a classified exercise Friday that tested the four-star headquarters’ ability to mobilize its forces in the event of war.

Austere Challenge 2021 brought together some 4,400 troops from the U.S. and NATO for a weeklong simulation on how the allies would respond, Maj. Gen. John Boyd, EUCOM’s director of exercises and assessments, said in an interview.

“It has a wide focus. We are definitely not a one-trick pony,” Boyd said. “It would be fair to say we are working through a myriad set of problems.”

The scenario details are secret, but EUCOM said it involves bringing together the whole of allied power — land, sea, air, cyber and space assets – in the event of conflict. The training comes at a time of widespread military concern about a more assertive Russia.

EUCOM has conducted Austere Challenge exercises since the 1990s, but in the aftermath of the Cold War the drills became less intense as the prospects of conflict in Europe faded. During the past five years, however, Austere Challenge has grown in complexity as EUCOM was forced to refocus on its command and control skills.

In 2016, EUCOM’s former boss, now retired Gen. Curtis M. Scaparrotti, said during the exercise that his was a command “in transition,” trying to shift away from feel-good relationship building drills with allies to warfighting exercises.

Boyd said Friday that EUCOM has made significant strides since then.

“The transition I would say is complete,” Boyd said. “We are at a point where we are a warfighting command. There is no doubt about that.”

This year’s event faced the added challenge of a pandemic. While the coronavirus has forced the military to scale back many drills over the past several months, the social distancing limits forced by the crisis actually made training more realistic for the scenarios at EUCOM this week, Boyd said.

While scores of officers could assemble at EUCOM’s Patch Barracks headquarters in Stuttgart in the past, personnel were more dispersed this time.

In a fast-moving crisis, “we wouldn’t have the opportunity to sit side-by-side in Stuttgart,” Boyd said. “We would have to do this distributed across the (area of responsibility). It was a blessing in disguise.”

Planning is already underway for next year’s drill, he said.

“There is always work to be done to make us better — more lethal, more agile, more flexible,” Boyd said.