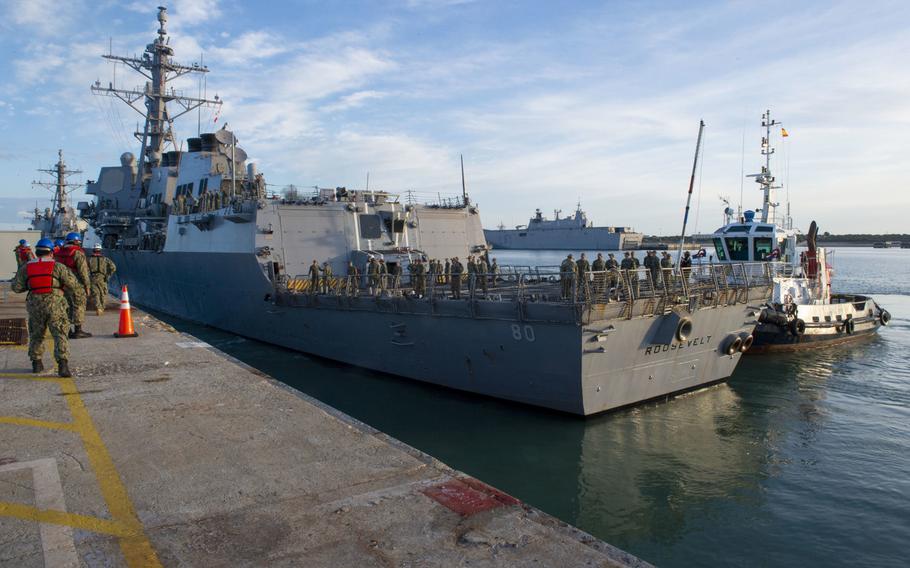 STUTTGART, Germany — Military projects primarily aimed at countering Russia, including upgrades to a U.S. Navy base in Spain, are among those being put on the backburner as the Pentagon shifts funds to pay for a border wall.

Defense Secretary Mark Esper this week ordered $545 million in construction projects to be redirected to fund a wall along the U.S.’s southern border with Mexico.

The move restores funding to 22 projects that were deferred at domestic bases and instead defers or cancels 18 projects overseas and one in Texas. Europe’s portion added up to around $270 million worth of project delays and cancellations.

The projects deferred at the Navy base in Rota, Spain, are a joint mobility center, a small craft berthing facility and a munitions facility, Esper’s directive stated Monday. A hot cargo pad where explosives can be unloaded at Moron Air Base, Spain, used by crisis response Marines, also was postponed.

In Germany, a logistics hub in Germersheim was deferred. Funding for a taxiway at an air base in Rygge, Norway, was canceled.

All the Europe projects were connected to the European Deterrence Initiative, which sets aside money for countering Russia — a top priority in the Pentagon’s national defense strategy. Rep. Adam Smith, the Democratic chairman of the House Armed Services Committee, accused the Trump administration of pilfering funds to pursue a domestic political agenda.

“Our partners and allies rely on the support of EDI funds to prevent Russian aggression in the region and these cuts will have real, lasting effects on our national security,” Smith said in a statement.

Other overseas deferments include funds for air traffic control facilities at Kwajalein and in Jordan; an electrical system upgrade in Bahrain; and a school administration building at Yokota Air Base, Japan.

Although Pentagon officials described the deferments as temporary, it could be up to Congress to fund them again.

“Of note, deferral does not mean DoD is cancelling the projects — we still have them in our plans as requirements for future potential funding,” EUCOM spokesman Lt. Cmdr. Joe Hontz said in a statement. “All projects on this list are important, and we will continue to work with Congress to support them.”

Overall, the delayed projects represent a small slice of the military construction work funded in Europe over the last five years. Under the Pentagon’s deterrence program, millions have been spent on refurbishing bases in the Baltics, training grounds in Poland and setting up networks of pre-positioned sites for stockpiling weaponry in Europe.

Still, building up capabilities is a priority at Rota, where leaders at U.S. European Command have long sought to add to the four Navy destroyers based there.

EUCOM’s Gen. Tod Wolters told the Senate Armed Services Committee in February that we wants more destroyers in Rota and that infrastructure is in place now to make that happen, should the Navy position more ships there. So far, the Navy hasn’t publicly indicated that it’s giving serious consideration to such a move.