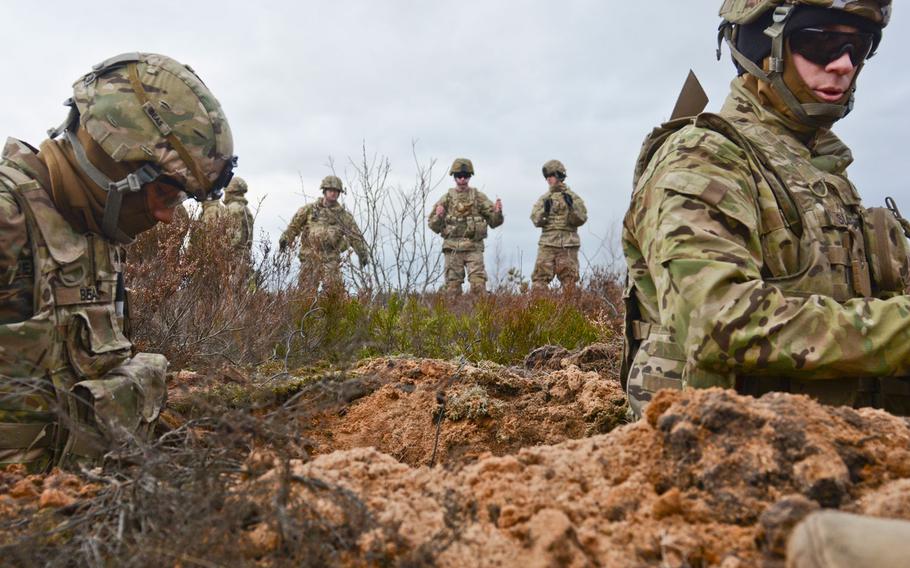 Soldiers of 3rd Squadron, 2nd Cavalry Regiment, stationed at Vilseck, Germany, stand in the trench and place dirt around the 43-pound charge craters to keep them stable so they can be buried in an upright position during a demolition training exercise at Adazi Training Area in Latvia, Jan. 30, 2016. (Steven Colvin/U.S. Army)

WASHINGTON — The Pentagon plans to sharply increase the number of troops, tanks and artillery positioned in Europe under a budget proposal that calls for a $2.6 billion spending increase aimed at strengthening the military’s posture across eastern Europe.

The $3.4 billion request for the European Reassurance Initiative is about four times the amount of the department’s $780 million request in 2016. It would add an additional brigade’s worth of troops to the U.S. footprint in Europe — between 3,000 and 5,000 rotational soldiers. A brigade-size fleet of heavy vehicles and weaponry would also be delivered to storage sites throughout the Continent, defense officials told Stars and Stripes on Monday.

The proposals are part of the Pentagon’s 2017 budget request, which aims to take on a series of vexing security challenges confronting the military as it faces “Great Power competition” from Russia and China, traditional terrorism threats and the instability brought on by the Islamic State in Iraq and Syria.

Defense Secretary Ash Carter, during a speech Tuesday, is expected to unveil some details about the new budget.

He is expected to announce a large increase to the counterterrorism budget request to fund an expanding fight against the Islamic State. Reuters, citing senior defense officials, reported that Carter would request more than $7 billion to fund operations against the extremist group.

Senior defense officials told Stars and Stripes that the fund would be used to meet other needs, such as replenishing thousands of bombs U.S. warplanes have dropped on Islamic State targets in Iraq and Syria since the start of Operation Inherent Resolve in August 2014.

The Pentagon’s planned moves would amount to a surge in military presence and spending on a Continent that until two years ago was a steady target for troop cuts. But Russia’s annexation nearly two years ago of Ukraine’s Crimea Peninsula and its support of pro-Russian rebels in eastern Ukraine has led the United States and NATO to dramatically step up their presence in eastern Europe.

The budget serves as an acknowledgement that the post Cold War order in Europe, where NATO leaders spent two decades attempting a strategic partnership with Russia, is over.

The additional troops and tanks called for in the new spending plan will augment the tanks and artillery the Defense Department has moved to Europe during the past year. Already, a brigade’s worth of heavy equipment is positioned at strategic locations in Germany and the Baltics.

“The security challenges have really given us a new focus,” a senior defense official said.

The new troops, which are expected to rotate in from the U.S., would provide relief to the Vicenza, Italy-based 173rd Airborne Brigade and Vilseck, Germany-based 2nd Cavalry Regiment, two units that have been deployed in Europe’s east repeatedly over the past two years.

“They’ve been constantly deployed,” a senior defense official told Stars and Stripes. “We are going to try to source that from units” based in the U.S.

The officials said that the funding increase is a show of force meant to signal U.S. commitment to its NATO partners.

While the Pentagon has yet to detail all aspects of how the increased funding in Europe will be doled out, it will likely support a wide range of military missions in Europe.

Since the European Reassurance Initiative was launched in late 2014, the funds have supported more frequent Air Force and Navy rotations into eastern Europe along with numerous infrastructure projects to sustain an increased presence, such as refurbished military runways, firing ranges, barracks and training grounds where allies conduct war games.

By beefing up its presence, the Pentagon aims to reassure wary allies in close proximity to Russia and send a deterrent signal to Moscow, which has expanded its own military presence around NATO’s periphery.

Russia did not immediately respond to the Pentagon plan to further bolster its force in Europe, but past announcements have been met with threats of countermeasures from Moscow.

If the Pentagon budget is approved, it will provide a boost for U.S. Army Europe, which has faced sharp reductions in force structure in recent years.

Those cutbacks have left the Army with only two brigades permanently forward stationed in Europe after two others were inactivated two years ago, forcing the military to rely on rotational units to carry the increased load.

In recent years, the U.S. military has steadily drawn down its forces in Europe, which now stand at about 65,000 in total. The downsizing has left the military in Europe undermanned for the current security environment, EUCOM warned in a new strategy document issued last week.