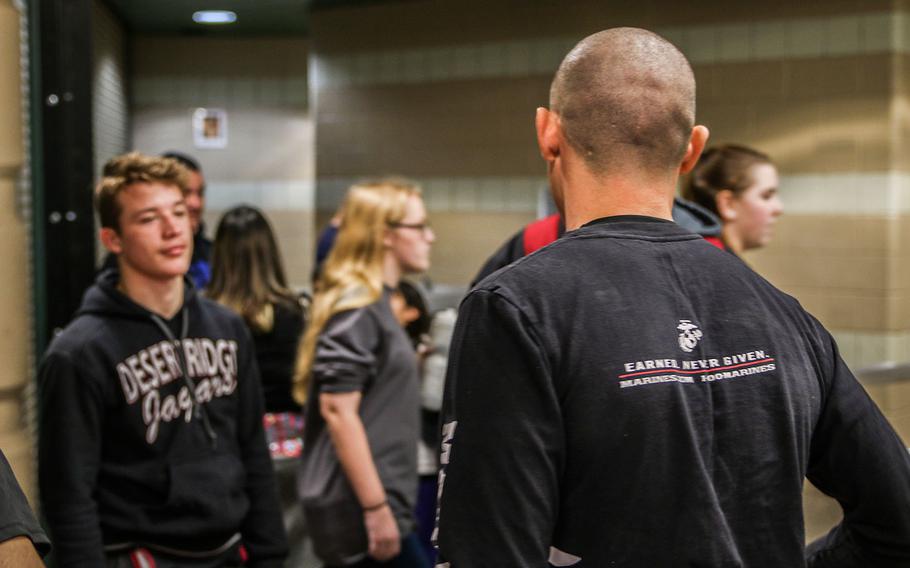 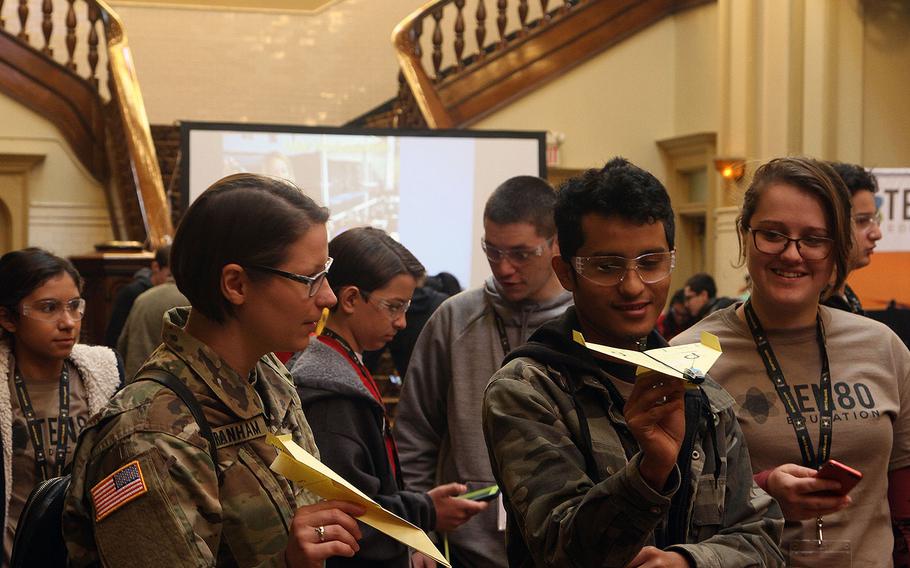 U.S. Army Reserve 1st Lt. Katherine Branham of the 41th Theatre Engineering Command compares her airplane with a high school STEM students during the U.S. Army All-American Bowl week Go Army Experience Zone Ten80 STEM workshop Jan. 5, 2018, at Sunset Station in San Antonio, Texas. Branham was invited to share her experience as an Army Reservists and how that translated into her civilian career during the event. (Ian Valley/U.S. Army)

Seventeen years of war, TV spots depicting the struggles of wounded warriors, and curbs on military advertising budgets have left the armed forces with an image problem that could take years to repair, said a senior Department of Defense official.

Unsettling myths about the military are rising among recruit-age youth and “influencers” — parents, teachers, clergy and coaches — in part because increasingly they have no personal or family ties to the armed forces, said Lernes “Bear” Hebert, acting deputy assistant secretary of defense for military personnel policy.

“While there is great support for military service men and women, we do find that misperceptions about service have taken a toll on propensity to serve,” Hebert said. “And because we’re not out there offering a contrary message, we’re seeing a decline that is most troubling.”

For example, 63 percent of youth ages 16 to 24 believe it is “likely” or “very likely” that a person leaving the military today has psychological or emotional problems. “They hear about post-traumatic stress disorder and all the challenges faced by service men and women post-conflict, and believe that’s indicative of the vast majority of individuals who serve,” Hebert said.

Absent any other information, Hebert said, the public has no way to put in context the many ads they see soliciting donations to support injured veterans.

“The risks are very real and service is unlike anything else you will do in the civilian world,” Hebert said. “But by far the vast majority of servicemembers leave the military perfectly healthy and move on to very rewarding and fulfilling lives.”

He cited other survey results showing that, in 2004, 85 percent of youth ages 16 to 21 thought it “extremely likely” that joining the military would allow them to earn money for college. By fall of 2016, the proportion who knew that, through military service, they could earn money for college had fallen to 60 percent.

The 25-point drop occurred despite the fact that Congress, in 2008, enacted the Post-9/11 GI Bill, with vastly improved veterans’ education benefits. So it is worrisome when recruit-age youth aren’t being told at school or home about one of the most significant benefits they can realize from military service, Hebert said.

“We may not be able to compete with every large corporation on pay, but our benefits are second to none,” he said. “So, we really need to do something to educate prospective recruits that you can have a pretty good quality of life and a great [education benefit] on leaving service after one term.”

Over the same period, 2004 to 2016, the proportion of youth who felt the military provided an attractive lifestyle declined from 63 percent to 35 percent.

And one of the oddest myths about military life, particularly in this age of social media and instant communication, involves personal contacts. The proportion of youth who believe that, while in service, a member is able to stay in touch with family and friends fell from 58 percent down to 23 percent. The apparent fear, said Hebert, is that “either you’re going to be sequestered somewhere or you’re going to be deployed with no way to contact your family or friends.”

On average the services need 264,000 new recruits each year, taken from a pool of about 400,000 youth surveys estimate have a propensity to serve.

To address negative misperceptions or general disinterest in the military among others, the Defense Department will ask Congress this year to fund a mass marketing campaign to educate youth and their influencers on the attractions of service life. Though he could not discuss the size of the marketing effort until the budget is unveiled, Hebert forecast a “pretty significant campaign.”

“We fully appreciate that people don’t get media the same way they did five years ago,” he said. Therefore, the campaign “will be split between addressing influencers and [media] they frequent, as well as getting into social media and online to approach youth in a more meaningful way.”

A second initiative, called “This is Your Military,” won’t require budget dollars. Starting in February, military commands and personnel will be encouraged to reach out to local communities to try to broaden understanding of service life.

Each month the focus of this outreach will change. In February the theme is that servicemembers are “people just like you,” Hebert said. In March the focus will be educating communities and youth on the variety of job skills found in the military. In April, the breadth of education benefits will be highlighted.

The challenge of educating Americans on their military got harder after the draft ended in 1973. Over the years more military bases across the country closed and the force got smaller, further reducing military ties to towns and communities.

“As a result, they don’t get firsthand accounts of what military service is all about,” Hebert said. Perceptions instead are shaped by “what they see in the news, what gets streamed or the many advertisements [for] helping [injured] veterans.”

DOD aggravated the perception problem when, starting in 2010 as military budgets tightened and recruiting remained strong, it stopped advertising about the military in general, though each service continued to run its own ads to go after recruits as needed. That rollback in advertising has weakened the military’s “brand” among Americans, Hebert said.

“It costs a lot more to get back into establishing your brand than it does to maintain your brand,” he said. “If Coca-Cola stopped advertising and we stopped calling everything a Coke, then it would take them a significant investment to get that branding back. I think that’s the situation the department is in now.”

Defense Secretary Jim Mattis, a retired Marine Corps general, is personally engaged in the effort to better educate youth and influencers. He has called for more detailed reports on recruiting and retention than past defense chiefs sought.

“He knows probably more about the business than we do by the depth of questions he’s asking,” Hebert said. He knows “recruiting is something you do [continually] and not just for recruits you’re bringing in next year but for recruits you’re bringing in for the next five years. … It’s a long-term investment the department has to make to sustain the all-volunteer force.”