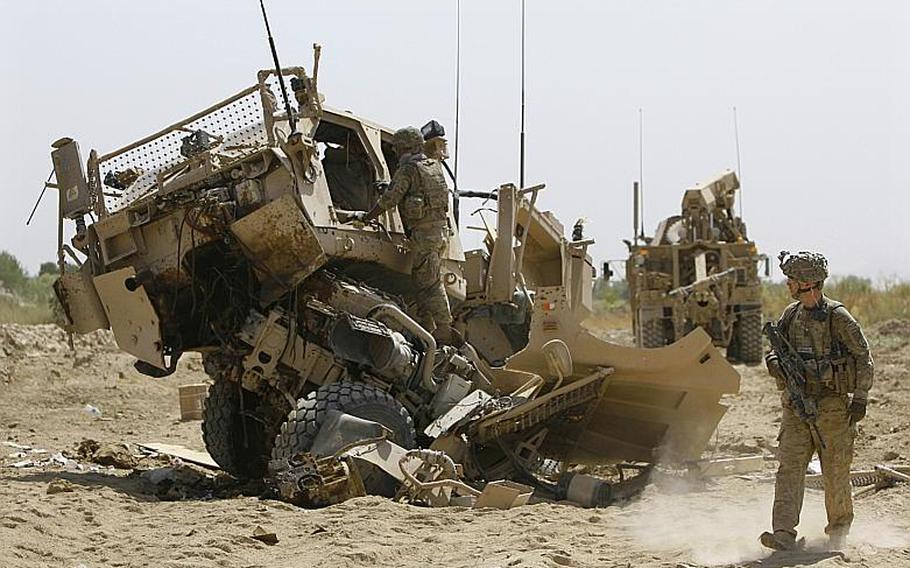 Company C Commander Capt. Dennis Call walks past a destroyed M-ATV while a member of the Explosive Ordnance Disposal team looks in the cab following an improved explosive device attack that killed five soldiers near Combat Outpost Nalgham in Afghanistan on August 11, 2011. (Laura Rauch/Stars and Stripes)

Company C Commander Capt. Dennis Call walks past a destroyed M-ATV while a member of the Explosive Ordnance Disposal team looks in the cab following an improved explosive device attack that killed five soldiers near Combat Outpost Nalgham in Afghanistan on August 11, 2011. (Laura Rauch/Stars and Stripes) 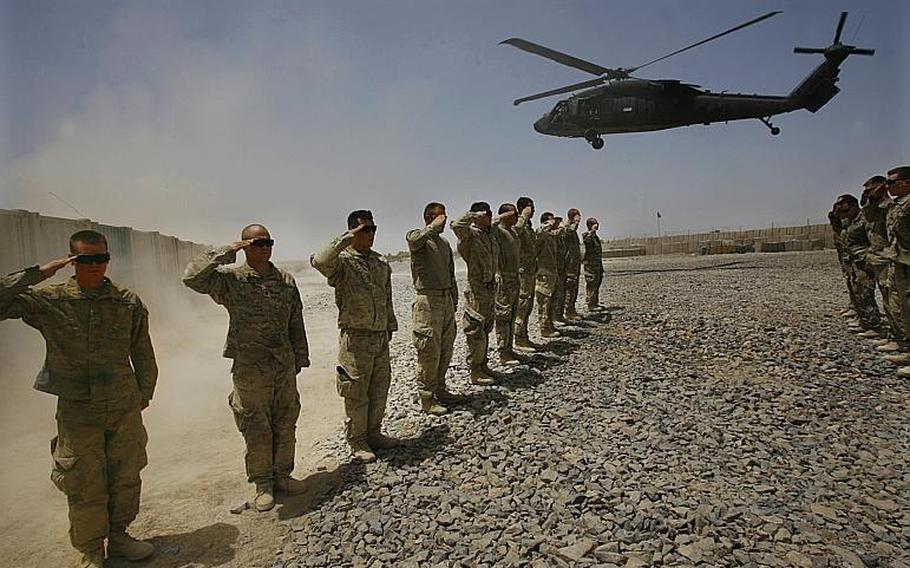 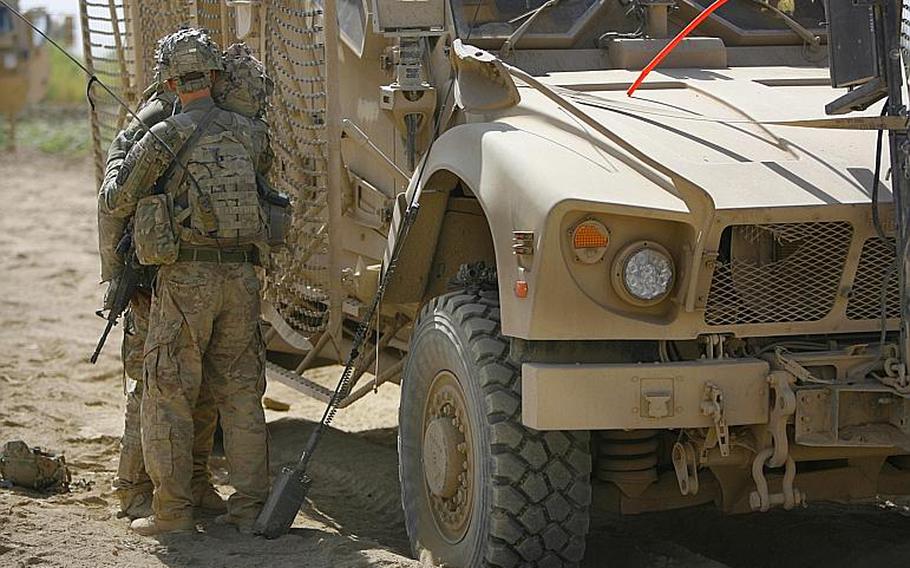 COMBAT OUTPOST NALGHAM, Afghanistan &mdash; A quiet solemnity has settled in here, and a profound sadness hangs like a fog. The gym that usually blasts with music and clangs with the sound of weights is silent. A painful emptiness pervades the post.

For those in Company C, 1st Battalion, 32nd Infantry Regiment, 3rd Brigade Combat Team, 10th Mountain Division, Thursday was the worst of days. Five of its soldiers, all from 3rd Platoon&rsquo;s 1st Squad, were killed when their Mine Resistant Ambush Protected All Terrain Vehicle rolled over an improvised explosive device on a desolate road in southern Kandahar province.

&ldquo;It&rsquo;s like your family just got ripped out of your heart,&rdquo; Pfc. Thadius Deloatch said.

After the explosion Thursday, the battalion chaplain couldn&rsquo;t get here soon enough. A line of soldiers needing him waited late into the night, and early the next morning. For many, the tears pushed out in waves. For others, solace came in the form of a quiet stoicism.

&ldquo;I don&rsquo;t know what to do right now. My whole squad is gone,&rdquo; Pfc. Jeremy Urzua said. His squad leader, Frank, was among the soldiers killed in the blast and had given him a rare day off Thursday.

&ldquo;I didn&rsquo;t see it at first, but he just saved my life,&rdquo; said Urzua, who was back at COP when the attack occurred that morning. According to Company C Commander Capt. Dennis Call, the IED was triggered by a detonator and was buried in a powdery layer of soil soldiers call &ldquo;moon dust.&rdquo; From fighting positions nearby, soldiers watched as the catastrophic explosion sent a plume of white smoke nearly 200 feet in the air. When they arrived at the blast site moments later, they found the doors and turret blown from the vehicle.The extreme nature of the blast, which breached the hull of the armored vehicle and pushed the engine into the cab, remains under investigation, but soldiers here speculate that military-grade explosives were used. Members of the 1st Squad, who were posted at one of the fighting positions, were on a breakfast run when they drove over the IED planted in the road nicknamed &ldquo;Montreal bypass.&rdquo; It was built recently by 1st Battalion, 32nd Infantry Regiment in an effort to cut off the enemy line of approach and to link Company C to Company A to the west. &ldquo;This was probably harder fought for than any of the other territory,&rdquo; said 1st Lt. Corey Walker about the Montreal bypass. The company, which is pushing south to the Arghandab River, is attacked nearly every day. They&rsquo;ve suffered multiple IED blasts, and more than 20 soldiers have been injured. &ldquo;When you&rsquo;ve sacrificed lives for a piece of ground, it becomes more than a piece of tactical terrain. The war for us is this 800 meter stretch of road,&rdquo; Walker said. Third Platoon knows about sacrifice. Since deploying, all seven of the soldiers the company has lost have come from 3rd Platoon. Along with the five deaths on Thursday, Spc. Preston Dennis was killed in April in an IED strike and Pfc. Corey Johnson was killed in May when his vehicle was ambushed in a recoilless rifle attack. The soldiers of Company C have forged an alliance known only to the infantry soldier. They share the misery of extreme suffering, the filth and the physical and emotional scars earned together.Since the attack, soldiers have been remembering the best of those who were killed Thursday. &ldquo;They&rsquo;re what the infantry is all about. They were just willing to do anything for you, for each other,&rdquo; Urzua said.Frank, the squad leader, was a family man and the father figure whom so many looked up to. Lay was the athlete and the fast learner who could figure anything out. Morris was a college boy who could take it as well as he could give it, and though he deployed late, he fit right in. Freeman was the martial artist who could do a hilarious Bill Cosby impression. Lopez, the nicest soldier anybody ever met, was always the first to help out. His smile never left his face, soldiers said. As soldiers look to get on with their mission, they know they have each other but worry about the families back at Fort Drum, N.Y., and wish they could be there for them. Some wonder if they&rsquo;re becoming part of a forgotten war. &ldquo;People back home don&rsquo;t even know we still got people dying out here,&rdquo; 3rd Platoon&rsquo;s Spc. Jordan McDaniel said. The five soldiers from Company C were among seven NATO servicemembers killed in Afghanistan on Thursday, and their deaths follow the crash of a Chinook helicopter in Wardak province, where 30 U.S. servicemembers were killed.But Company C is nothing if not resilient. &ldquo;It&rsquo;s terrifying getting back in a vehicle after you&rsquo;ve seen what can happen,&rdquo; Eric Gregory, staff sergeant and 3rd Platoon senior squad leader, said. &ldquo;Everyday we&rsquo;re faced with a choice to take the hard right over the easy wrong. This platoon will not give up. They&rsquo;re kicking.&rdquo; Insurgent attacks will not force them out, Gregory said.&ldquo;They want to crush our hopes. They want to demoralize us. It&rsquo;s not working. Those are their tactics, but we&rsquo;re still here, every day. Until we accomplish the mission, we&rsquo;re not going anywhere.&rdquo;