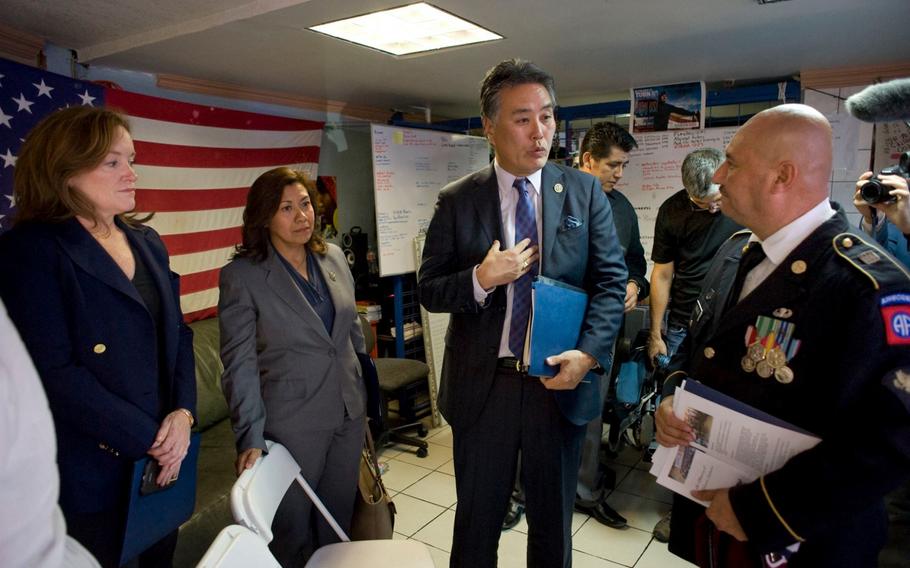 WASHINGTON — When five members of Congress traveled to Tijuana, Mexico, on Friday, they met U.S. veterans, many of them with mental illness or physical issues — all deported and unable to access their federal benefits.

The congressmen, members of the House Committee on Veterans’ Affairs, listened to the veterans’ stories with the intent to return to Washington and suggest ways to connect them with Department of Veterans Affairs disability compensation, health care and other services available to honorably discharged veterans.

Rep. Mark Takano, D-Calif., who led the delegation, is calling for urgency.

“Both the VA and Congress need to act quickly,” he said. “These veterans have a right to service-connected disability, to medical care and to education. They don’t have access to a VA-provided medical provider; they can’t receive physical and mental health care. I think many Americans would be astonished to learn of their situation.”

Like the other veterans at the support house, Barajas-Varela was honorably discharged from the U.S. military but deported in 2009 after being convicted of a crime. Servicemembers are automatically eligible for American citizenship, but many never follow through on their naturalization paperwork – some because they don’t realize it’s not automatic.

Barajas-Varela has spent years advocating for deportation reversals for U.S. veterans. But during the delegation’s visit last week -- conceding he and the others may never return to America -- he fought for improvements to their situation in Mexico.

“We can’t go home. Some of us may never go home,” Barajas-Varela said over the phone Tuesday. “At the very least our quality of life may change. If they open up clinics and get compensation taken care of by the VA, we’ll be able to have a better quality of life, physically and economically.”

Veterans at the support house struggle with addiction, depression, military-related ailments and other issues, including high blood pressure, diabetes and hepatitis C, Barajas-Varela said. Most of them are 50 to 70 years old.

The delegation is drawing up recommendations to send to the House committee and the VA about how they could help the men.

They want the VA to expand its telehealth program to Tijuana so veterans there could receive care remotely. To do that, the veterans would also need access to technology other than the one shared computer in the support house, Takano said.

One veteran who the congressmen met is in his 60s and in “bad shape,” Takano said. The closest medical provider authorized to examine him for a possible VA disability rating is in Mexico City – more than 2,500 miles away – and his family is struggling to earn the money to send him.

Sometimes veterans wait months to get an appointment in Mexico City or Guadalajara, another approved site that’s also more than 2,000 miles away, Barajas-Varela said. When they do secure an appointment, they’re given only about a week’s notice.

“It’s impossible for some of these guys to pay for a ticket, get on a plane and get where they need to,” he said.

He described the veterans’ situation following the delegation’s visit as a “waiting game.”

“I believe something is going to happen out of it,” Barajas-Varela said. “Hopefully we can get some changes made.”

Tiffany Haverly, communications director for Rep. Phil Roe, R-Tenn., chairman of the House Committee on Veterans’ Affairs, said Tuesday the committee “has no plans to take up any legislation related to benefits for deported veterans.”

But the VA has the authority to make the changes, Takano said. He plans to take the requests to VA Secretary David Shulkin, though it’s uncertain how responsive the agency will be.

In June, following a visit at the support house in Tijuana, the Congressional Hispanic Caucus reached out to Shulkin about providing earned VA benefits to deported veterans. They asked Shulkin to quickly respond to what they called an urgent meeting request.

The caucus had not received a response from the VA as of Tuesday, nearly four months after the request was sent, said Carlos Paz, the caucus’ communications director.

“I’m hopeful. I think we’re at the stage now where a lot of the public is simply incredulous,” Takano said. “They say, ‘Really, we’re deporting veterans?’ This is outrageous. I think we have a chance to really have direct bearing on the VA.”