Defense bill extends protection of Afghans under threat for helping US 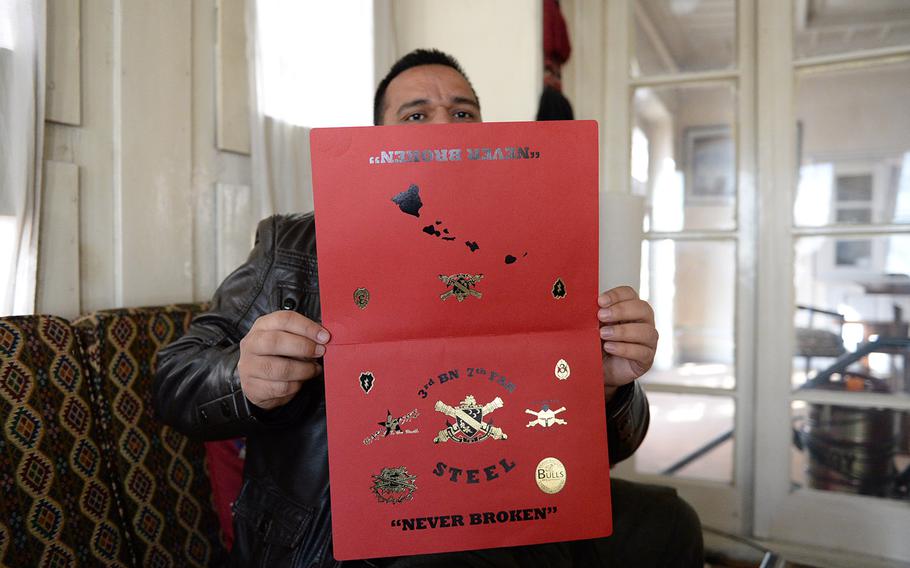 "Zakir," a former interpreter for the U.S. military in Afghanistan, fearing to show his face because of Taliban threats, hides behind an award he received. (Stars and Stripes)

"Zakir," a former interpreter for the U.S. military in Afghanistan, fearing to show his face because of Taliban threats, hides behind an award he received. (Stars and Stripes) 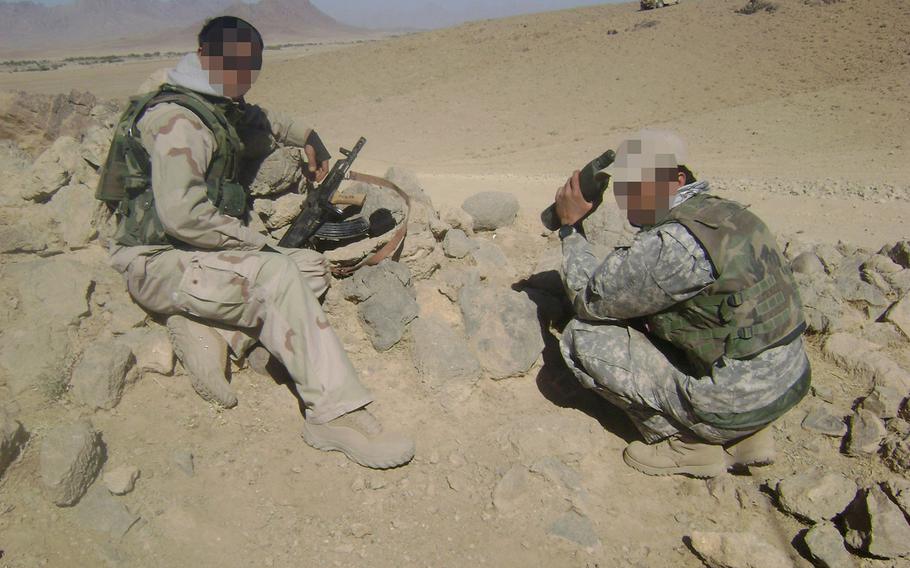 "Malik" and a fellow interpreter on patrol in Herat province in 2007. (Courtesy photo)

WASHINGTON — Tucked more than a thousand pages into the pending national defense policy bill unveiled this week is a provision that is a matter of life and death.

For the past six years, the special immigrant visa program was a lifeline for Afghan interpreters and other foreign employees who worked with U.S. forces or officials and are getting death threats from the Taliban and others.

That program is set to expire this year and almost didn’t make into the 2017 National Defense Authorization Act that passed the House on Friday.

In the original House version of the defense budget, the program was extended but modified to severely limit those who were eligible, and it did not include authorization for new visas. The Senate defense bill didn’t contain the special immigrant visa program at all.

But during months of negotiation between the House and Senate over the final language for the defense policy bill, the program was reintroduced and expanded beyond the House version. NDAA section 1214 now allocates 1,500 new visas and broadens criteria to define “eligible” Afghans as translators for the State Department or the U.S. military and employees who performed “sensitive and trusted activities” for the U.S. government.

Supporters of the program welcomed the inclusion of 1,500 new visas but say that’s not nearly enough. Officials say 9,000 visas have already been provided, and there are more than 10,000 Afghans still trying to obtain one.

“It’s no exaggeration to say that this is a matter of life and death, as Afghans who served the U.S. mission continue to be systemically hunted down by the Taliban,” said Sen. Jeanne Shaheen, D-N.H., who, led the efforts to extend the program along with Senate Armed Services Committee Chairman John McCain, R-Ariz.

“I’m very relieved that additional visas will be made available in this legislation,” Shaheen said. “However the number of visas needed for those in danger far surpasses what’s provided in this bill. The United States promised to protect these Afghans, and I will do everything in my power to make sure Congress doesn’t renege on that promise.”

When the Senate defense bill was being drawn up earlier this year, McCain pressed to include the program. But objections by immigration critics over cost and jurisdiction – there was argument that the visas should go through the judiciary committee – led to exclusion of the program from the initial draft.

McCain then sought to have the program included in an amendment package he brought up for a Senate vote in June. To pass, the package required unanimous consent of the senators present. Sen. Mike Lee, R-Utah, withheld his vote in exchange for support on his own amendment on a different issue.

“Lives of men who have put it on the line for the men and women serving – don’t we have some sense of perspective and priority here?” McCain railed in vain. “People are going to die, I tell the senator from Utah. They are going to die if we don’t pass the amendment and take them out of harm’s way.”

McCain cited written testimony from Gens. Stanley McChrystal and David Petraeus, who, at different times, led the fight in Afghanistan, and from former Ambassador Ryan Crocker. All attested to the contributions these foreigners made to the U.S. effort and the dangers they face. He called it a moral obligation and questioned the message this would send to U.S. allies if the U.S. abandoned these people.

McCain said the issue had kept him awake the night before. He said he thought about his own war history when fellow Americans died in aerial combat and he wondered whether he could have prevented their deaths.

“It bothers me to this day,” he said. “I can’t imagine how it must bother someone who is literally signing the death warrants of people who, in their innocence, decided they would help the United States of America.”

After McCain’s amendment package failed, Shaheen introduced a “motion to instruct,” authorizing the conference committee to reintroduce the program during House-Senate negotiations over the bill. That motion received strong support, opening the door to extending the program in the new NDAA.

On Thursday, 29 veterans canvassed Congress advocating support for efforts to expand the number of visas – whether through other areas of the budget or through congressional committees.

“American servicemembers cannot complete their mission without translators, engineers, security guards, embassy clerks, logisticians, cultural advisors and soldiers who have served with and risked their lives alongside them,” said Scott Cooper of Human Rights First, which launched the Veterans for American Ideals initiative. “Thousands of these men and women and their families now face grave threats for working to advance U.S. interests. We cannot turn our back on them now.”

The veterans are asking Congress to include 4,000 more special immigrant visas in the new budget once the current Continuing Resolution expires Dec. 9.

The House voted to authorize the NDAA on Friday. The Senate will vote on it next week. McCain declined to comment on the issue until the Senate vote.